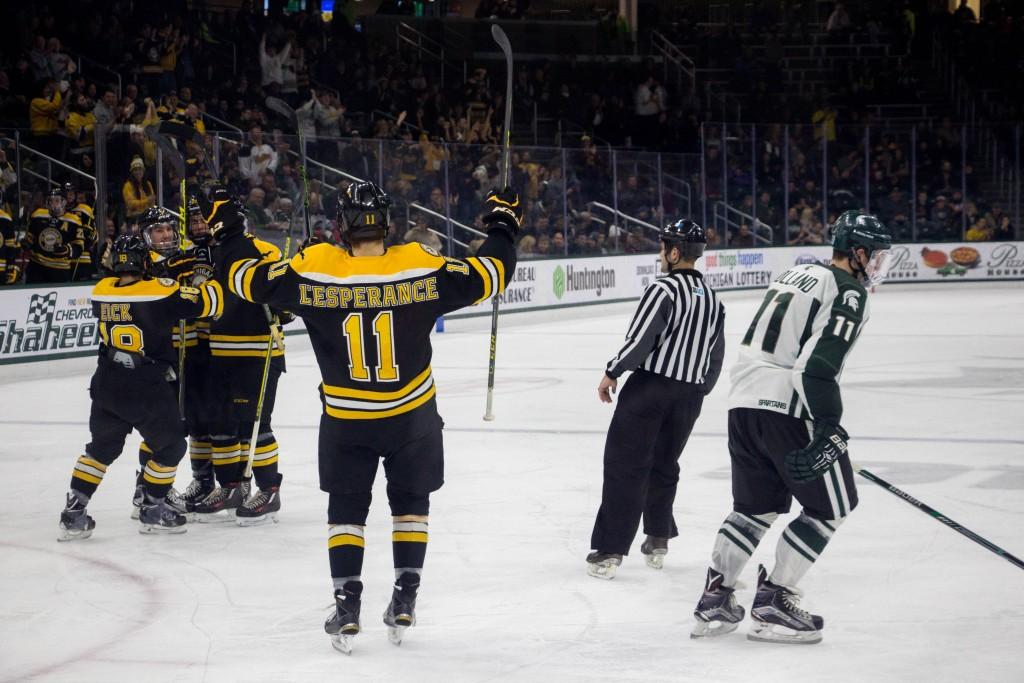 It was a tale of two cities Saturday night for the Michigan State Hockey and Football teams. While the Spartan football team was able to pull out an impressive last second victory over Ohio State, the Hockey team was on the short end of a close game with Michigan Tech, losing 5-4 in overtime.

“That was a tough one,” said coach Tom Anastos. “I thought we did a lot of good things and pucks seemed to go in kinda in fortuitous ways. I give them credit for coming back and making plays when they needed to make them. They made more plays than us and ended up winning the game.”

Usually the Spartans are the ones that get off to a quick start but this time it was the other way around. The Huskies came out very strong on the puck forcing the Spartans back on their heels to start the first period.

The Spartans did the best they could to hold off the Husky pressure, but succumbed to it with 8:46 to play in the first. Jake Hildebrand left a rebound that found the stick of Tech captain Alex Petan who tucked it home giving the Huskies the early lead.

The Spartans seemed to rally after falling behind early. Just minutes later Joe Cox put a backhanded shot between the legs of Tech goaltender Jamie Phillips that just trickled in. It would be 1-1 midway through the first period.

The Spartan power play has mightily struggled coming into this game. They had only converted on 6-of-47 chances which was good for 48th in the nation. That quickly changed however as the freshman, Zach Osburn, scored his third goal of the season as he rifled a shot past Phillips from the left circle, giving the Michigan State a 2-1 lead with 5:54 to play.

The second period turned into something of a goal-fest as multiple goals from both teams went in one after another in a short amount of time.

Penalties to Michael Ferrantino and Joel L’esperance put both players in their respective penalty boxes. With nothing happening on the four-on-four session, the Spartans had a short power play to work with after Ferrantino came out of the box.

The short Spartan power play was more than enough time for Mackenzie MacEachern to increase the lead. MacEachern skated in from the right side of the ice and went forehand backhand on Phillips to put the Spartans up 3-1.

“It’s kind of been a vocal point over the past couple weeks,” said forward MacEachern of the power play. “We’ve been working on it everyday in practice. So it’s definitely good to see a couple of those pucks go in. Hopefully the momentum for the power play continues.”

Not even a minute later the Huskies were able to crawl back into the game thanks to L’esperance. who made it 3-2 Michigan State.

The Huskies created a number of quality chances in the second period as they laid siege to the Spartans. The Spartan defense stood tough for as long as they could but with the number of chances the Huskies were getting they were bound to break through.

Almost ten minutes into the second period the Huskies were able to tie the game at three as Tyler Heinonen launched from the right circle that went past Hildebrand, one he would like to have back.

Believe it or not, the scoring was not over in this period. JT Stenglein was able to regain the lead for the Spartans 12:32 into the second period. Stenglein took a pass in the slot from Joe Cox and went top shelf on Phillips. That would do it for the goal-fest and the Michigan State took a 4-3 lead into the final period.

For the majority of the game both teams played somewhat evenly. The Spartans would gather a few quality scoring chances, then the Huskies would take their turn shooting the puck at the Hildebrand.

A TV timeout late in the third period changed everything from there on out. The Huskies took over the game late and defenseman Mark Auk slipped one past Hildebrand to force overtime for the first time at Munn this season.

“Anytime you give a goal up late,” said Anastos. “That takes the momentum and they get a jump. That was a pretty critical time to give up a goal.”

As the late third period turned into overtime the Spartans continued to struggle offensively as well as defensively. The offense, which was clicking earlier in the game, was unable to register a single shot in overtime.

The defense was under a lot of stress in overtime, and saw the puck in their zone consistently. It looked like the two teams would call this one a draw and leave it at that until Heinonen capped off his four point night with the game winning goal with 41.8 seconds left in the game.

The Spartans and Huskies will turn right around and play another game tomorrow at 4 p.m. But before the Spartans take the ice on Sunday, there are a few things they’re going to have to clean up.

“I didn’t think everybody was going tonight,” said Anastos. “We had to shorten our bench much shorter than I wanted to. I didn’t think some guys had good jumps and good intensity and that’s not acceptable.”