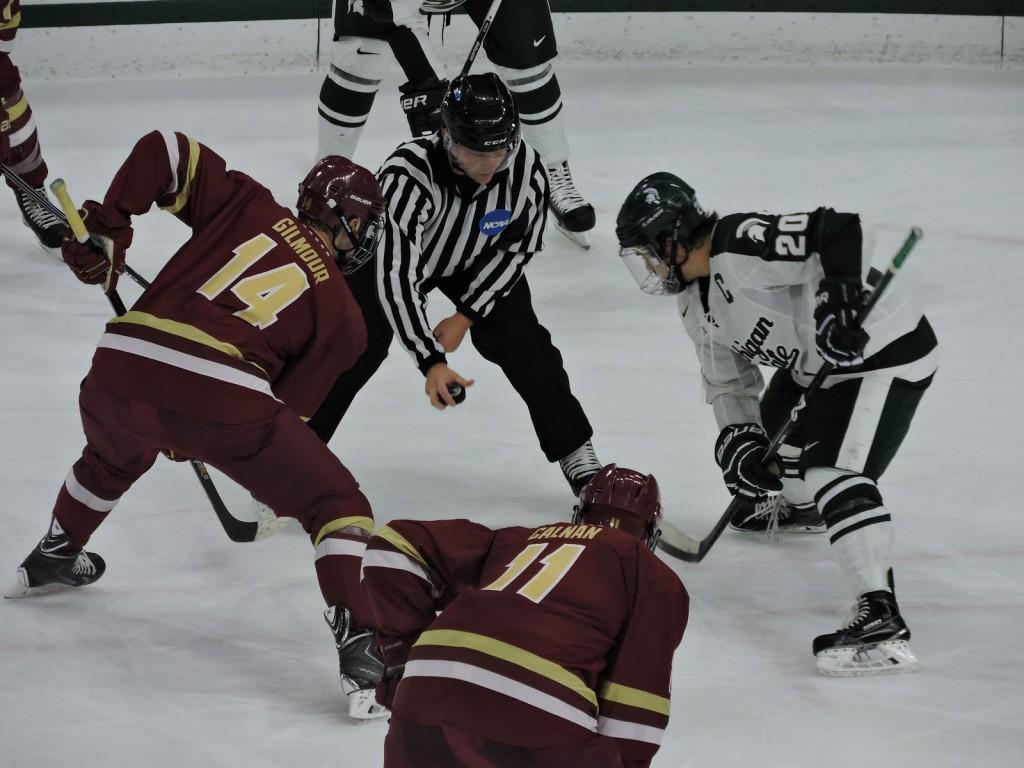 While the Spartans put in an an impressive effort, they came up just short to No. 2 Boston College.

Michigan State fought back from a three-goal deficit to tie the game 4-4 in the late stages of the third. Boston College won the game on a power-play goal and an empty-net goal shortly after.

Coming into this game, Boston College had only allowed six goals all season. Eagles goaltender Thatcher Demko seemed unbeatable behind an offense that was ranked sixth in the nation.

After a scoreless first period, the Eagles got on the board first thanks to Colin White’s first goal of the night. The Spartans answered just 11 seconds later after Mackenzie MacEachern received a pass in the slot and shot it past Demko’s glove.

With less than five minutes left in the second, White netted his second goal of the game to give BC the 2-1 lead heading into the third.

As the third period got underway State’s defense continued to have trouble containing the White, Ryan Fitzgerald, John Gaudreau line, as Fitzgerald extended BC’s lead to 3-1.  This lead was further extended to 4-1 midway through the third period.

Then the unthinkable happened.

Thirty seconds after the latest BC goal, Michigan State caught the Eagles napping and quickly put up two goals in the span of 14 seconds. JT Stenglein netted the first of these goals, Brennan Sanford emerged with the second. This made it 4-3 Eagles with about seven minutes to go.

Then, at the 14:15 mark of the third period, freshman Mason Appleton tied the game at four. . Boston College was forced to take a timeout after MSU had rattled off three goals in under two minutes.

Just to give you some perspective, the most goals Demko and BC had allowed this season was in a 4-3 victory over Denver.

As the final minutes ticked down Michigan State was awarded a power play, which they failed to convert. Almost immediately after, BC was awarded a power play when Joe Cox went off for interference. The Eagles rallied and scored the only power-play goal of the night to make it 5-4 with less than two minutes to play. Fitzgerald picked up the empty-net goal (his second goal of the game) to seal the 6-4 victory for Boston College.

While there are plenty of things for MSU head coach Tom Anastos to be upset about (0-7 on the power play, defensive lapses) there is even more for him to be impressed with. Michigan State went into the barn of the best team in the nation (BC ranks in the top ten in almost every category) and played a tough game down to the wire. The Spartans were able to quickly respond with three goals in two minutes on the No. 1 defense in the country and put four goals on BC, the most they have let up this year.

Looking at shots, the Spartans dominated the second and third period and ended up outshooting the Eagles 37-36. If Boston College had any less of a goaltender than Demko then they probably would have lost this game.

Michigan State’s offense has come to life these past few games, netting 16 goals in the last three games. If this offense can produce against this BC defense, then imagine what it might do against their Big Ten opponents.

While this loss stings, and will be scrutinized should MSU miss out on the national tournament, MSU needs to take the positives from this and move forward. No. 20 Michigan Tech and No. 3 North Dakota travel to Munn in the next few weeks.

Those are winnable games for MSU and will provide plenty of opportunity to make up for this loss.