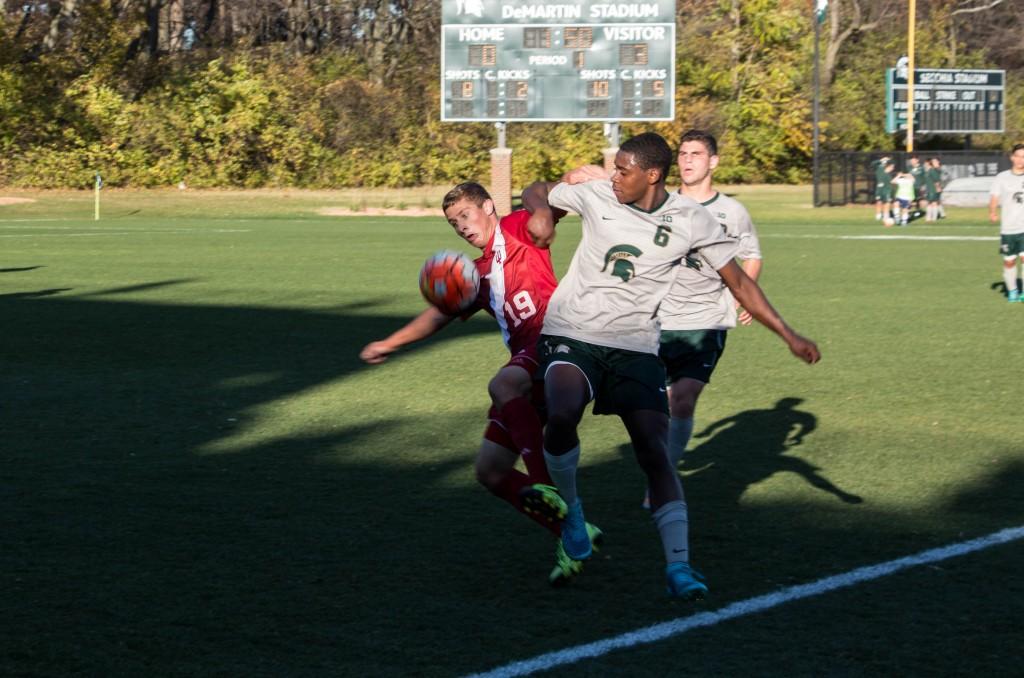 EAST LANSING – The Indiana Hoosiers came to DeMartin Stadium on Wednesday to play the Michigan State Spartans in their final regular season match of the 2015 season.

“In our program, it’s unacceptable to give up four goals in a game,” MSU head coach Damon Rensing said.

Michigan State led in number of shots (16-14) and corner kicks (10-5), but could not capitalize on most of those chances.

The first shot of the match was taken by Indiana and came less than a minute and a half in. The shot sailed wide, but the early pressure was something that continued throughout the first half.

In the seventh minute of the contest, Indiana scored its first goal off of a corner kick. The corner was taken by Tanner Thompson and headed into the back of the net by Derek Creviston.

Less than three minutes later, in the 10th minute, Indiana capitalized again off of a set piece. This time, it was off of a free kick by Thompson roughly 25 yards from the net.

“They scored early and it was tough to come back,” sophomore defender Jimmy Fiscus said.

With an early two-goal deficit, the Spartans’ offense had to push forward. One of their best scoring chances came almost fifteen minutes into the first half. The ball was sent into the box, bounced around, and found the foot of a Spartan in the box. Somehow, half of the net was wide open for a shot, but a Hoosier defender was able to slide and get a foot on the ball.

As the clock continued to tick, each team had its chances, but Indiana got the best of the MSU defense in the 35th minute. With a lob pass chipped over the backline, a Hoosier forward was able to sprint into the box and bury his shot, making it a 3-0 lead.

A deflated Spartan team went into halftime with a large deficit. They came out to start the second half pressuring as often as possible.

That pressure paid off in the 52nd minute. Coming off of a corner kick from MSU’s Connor Corrigan, midfielder Kyle Rutz was able to finish his header and give the Spartans their first goal of the match.

In the 68th minute, Indiana was able to eliminate any chances of an MSU comeback. Their fourth goal of the contest came from a Richard Ballard half-volley at the top of the box into the upper-right 90.

The 4-1 scoreline did not reflect the effort put forth by the young Michigan State soccer team.

“I don’t doubt that we have the talent, we have just been struggling to put it all together,” Fiscus said.

“This is a resilient group, this is a young group,” Rensing said. “We’re still having growing pains, but we have good leadership. These guys want to represent Michigan State. I guarantee whoever we play, we’ll be ready to go.”