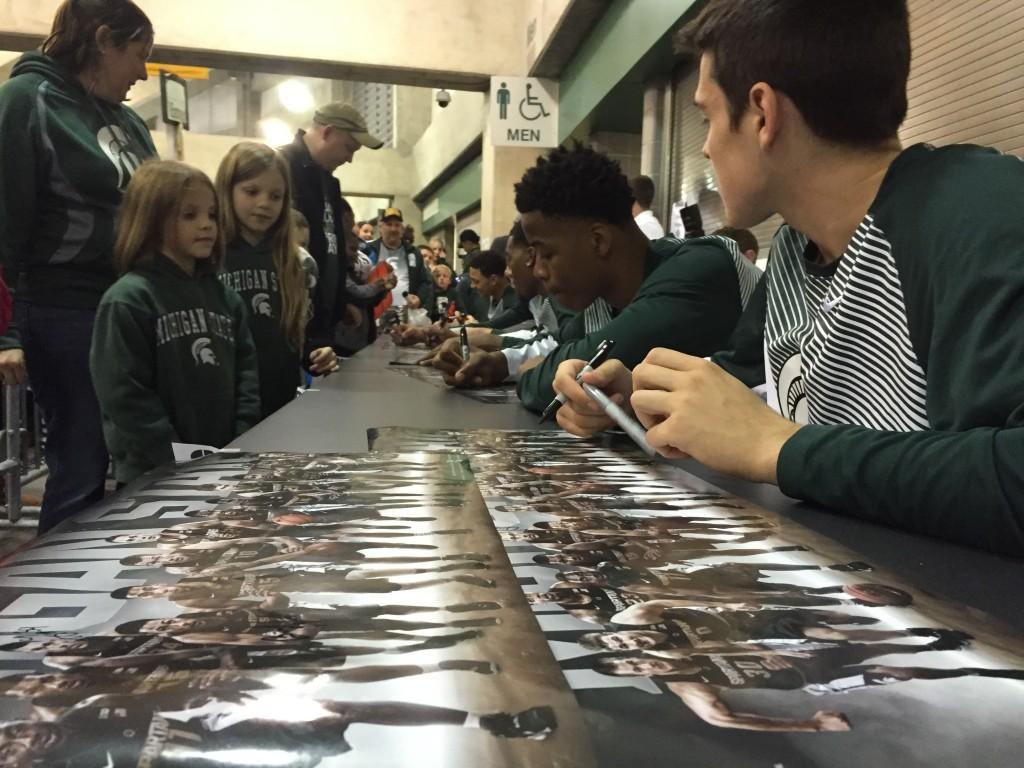 When the public address announcer warns you there will be special effects and loud concussions, you know you are in for a good night.

Lines wrapped around the Breslin Center well before doors opened on Friday night for Michigan State Madness. Fans were forced to sit in the aisles, as nearly all the seats were taken. It’s safe to say East Lansing was ready for some basketball.

Thanks to all Spartan fans for coming to #MSUMadness. We had to close doors due to reaching capacity. #sellout

Michigan State Madness is the unofficial kickoff to the season, an event marked by grand entrances by Suzie Merchant and Tom Izzo. From Iron Man to Beyonce, to an astronaut to the fifth member of Kiss, Spartan fans have pretty much seen it all.

The marching band and drumline kicked off the night with a bang. Then the women’s basketball team busted a move, complete with spotlights and fire. “Sparty’s Angels” was the theme for the women’s team, and they defended Sparty from a rogue “Michigan fan” armed with a spray can. Merchant pulled no punches.

“Did you notice when he came out with the spray can, he was fumbling it?” she asked the crowd.

Izzo’s squad was next. Once the lengthy player intros were done, a nervous energy filled the air. What would Izzo do this year?

Well, no cannons, no Iron Man, no Gerard Butler unfortunately. It was Mission: Impossible “starring” Tom Izzo, which featured Izzo (not actually Izzo) parachuting outside of the Breslin Center.

Needless to say, the crowd, and this writer, was slightly disappointed. Then Tom brought out his other friend named Tom. You and I know him as…TOM CRUISE! Talk about redeeming yourself after a disappointing entrance!

Or was it a fake? You be the judge.

Speaking of “Mission: Impossible,” the Spartans raised their 2015 Final Four banner as well. No one expected that would ever happen after a December loss to Texas Southern and the free throw shooting of a sixth grade rec league.

Finally, both teams had scrimmages to close out the night. Overall, not the best Michigan State Madness in history, but still a good time. All students should experience this night at least once in their Spartan careers.