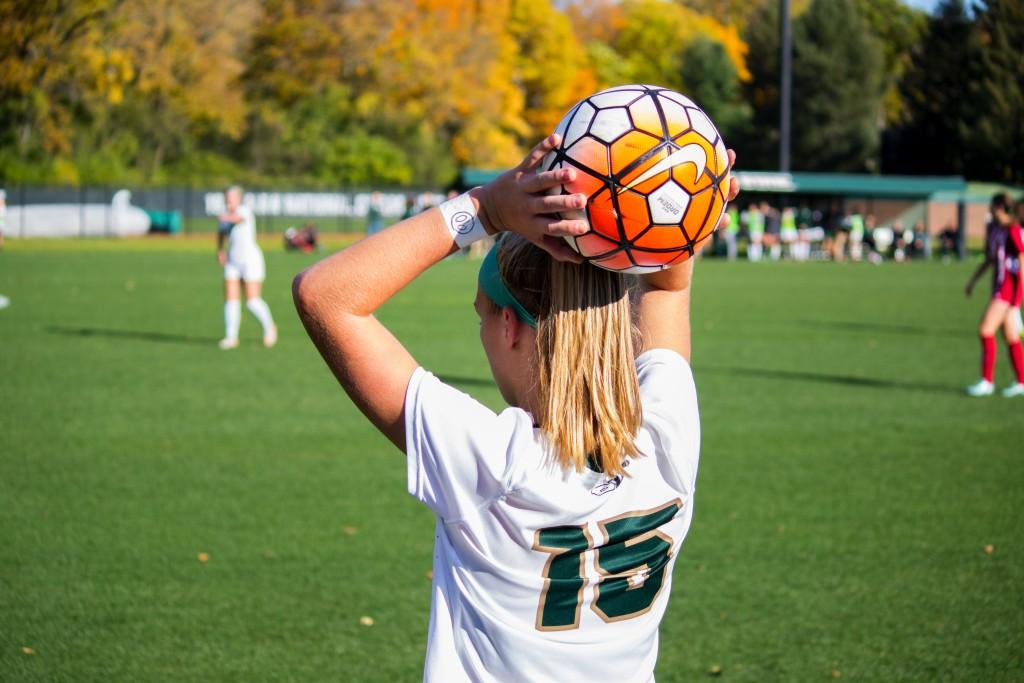 The Michigan State women’s soccer season is over after suffering a 2-0 loss in Columbus Wednesday night.

“We’re bitterly disappointed with how things went tonight,” head coach Mark Saxton said. “However, I’m really proud of the season this team has put together.”

With the win, OSU seal the No. 7 seed in the Big Ten Tournament, while an upset victory for Illinois over Minnesota means MSU will finish the season ninth in the Big Ten and out of tournament consideration.

Coming into today’s game, things looked pretty even on paper between the two sides as both had identical 4-4-2 conference records, while the Buckeyes had won only one more game during the season to sit at 9-5-3.

Michigan State couldn’t settle into the game quick enough as they as found themselves a goal down just three minutes into the contest.

An early corner from the Buckeyes saw Nikki Walts deliver a beautiful ball to the edge of the 18-yard box to senior Michela Paradiso, whose shot left the Spartan defence stunned.

“We were out of sorts [after the corner]” Saxton said.

After the quick goal, the Spartans tried to work back into things as Allyson Krause had a volley from 25 yards out that narrowly missed the target.

Just as MSU started to get over the shock of the opening goal, they found themselves two behind.

With 15 minutes remaining in the half, Paradiso was back into the action drawing a foul inside the box. She took the penalty kick and converted to score her second of the game and fourth of the season for the Buckeyes.

The Spartans controlled possession for the rest of the half and went in search of a quick reply, however the header from Michaela Kovacs was just wide of the OSU goal.

Michigan State came out to start the second half in search of goals and attempted to get Ohio State onto the back foot.

Kirsten Evans, the star from Sunday’s game, took a corner early in the second half hoping to replicate her heroics from a few days ago. A nice delivery came to Madison Duncan, but her shot was just wide of the target.

“The second half was much better, but we just had to play a lot of different people in positions some of them weren’t used to,” Saxton said.

The Spartans improved on their conference record from 2014 and saw encouraging performances out of freshman Lexy Warner as well as sophomores Jamie Cheslik and Kristelle Yewah.

“We took a step forward as a program forward this year,” Saxton said.