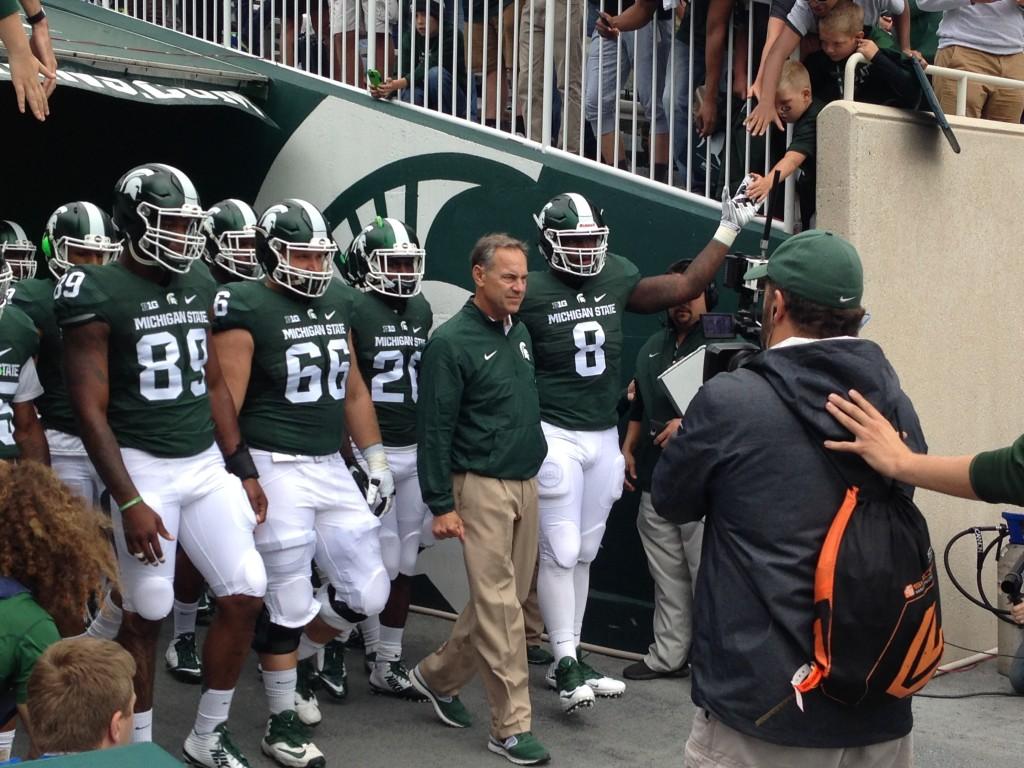 East Lansing – For the first time this season, the fourth-ranked Michigan State Spartans will travel outside the state of Michigan for their first true road test. Heading to Piscataway, New Jersey, the Spartans will look to spoil the “Black Out” at Rutgers.

Right outside the Manhattan skyline, the Scarlet Knights will try to avenge for their 45-3 loss to Michigan State last season. The primetime game at 8 p.m. in High Point Solutions Stadium will be the annual “blackout” game, with fans encouraged to wear black.

“We are going to try to spoil someone else’s fun, and have fun while doing it,” junior defensive back Demetrious Cox said.

This is all familiar territory for Rutgers. In 2006, the Scarlet Knights knocked off the third-ranked Louisville Cardinals, and the following year they beat the No. 2 South Florida Bulls.

“It’s always fun to play on the road – especially in an environment like this one. The crowd is going to be into it. All the fans, and students will be into it. It’s why you go to Michigan State,” senior linebacker Darien Harris said.

Harris added, “This is what college football is all about.”

Rutgers (2-2) moves the ball slow and methodically down the field. They rank in the top-ten in the country for time of possession (33:43) and third-down conversions (.500).

“That is going to be a key for us. We can’t play 15 yards deep, when they run a five-yard turn-around at the sticks,” Cox said.

Saturday’s game marks the seventh meeting between the two schools, with the series tied at 3-3. The series is also knotted up at one game apiece in games played in New Jersey. The Spartans came out victorious in the first game 34-10 in 1990 at Giants Stadium, while Rutgers took the 2004 bout in Piscataway.

Since 2009, Rutgers’ special teams has blocked 42 kicks. The Scarlet Knights have blocked at least four kicks every year since 2007. That number ranks as No. 1 in the NCAA.

“Their special teams are outstanding, and defensively they fly around and hit people. Bottom line is – we are going to line em’ up and play,” head coach Mark Dantonio said.

Battling critics as well as the injury bug, Dantonio addressed his team will always play with effort and toughness.

“You can’t make promises in this game. You can’t promise you’re going to win or cover the spread. Ultimately, we promise people we will play the very best we can. We will bring energy and play with effort and toughness. That is most important,” Dantonio said.

Overall, that effort and toughness has been a key to their quick 5-0 start. In the first five games this season, Michigan State has only trailed for 68 seconds combined.

Michigan State enters this Saturday with a nine-game winning streak, which is the second longest in the Dantonio era. The longest streak came in 2013-14 at 11 straight. Michigan State’s current streak is the fourth-longest active streak in the NCAA FBS. Ohio State sits in first with 18 consecutive wins.