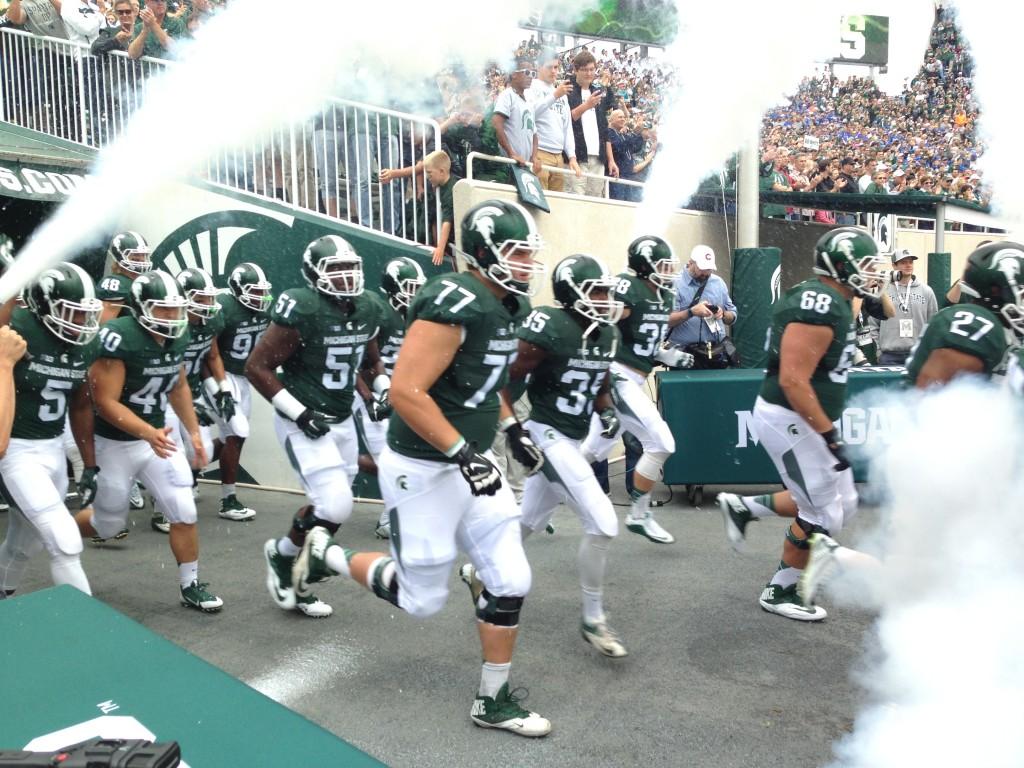 Unfinished business. That is the motto of the No. 2 Michigan State Spartans as they enter Big Ten play. This Saturday, the Spartans begin their quest for a Big Ten Championship, as they play host to the Purdue Boilermakers.

Last season the Spartans achieved another feather in their cap, winning the Goodyear Cotton Bowl Classic in a shootout with the Baylor Bears. Nevertheless, Michigan State players and fans know the sweet taste of victory is not as sweet unless the Big Ten crown is yours.

“Obviously we talk about winning every week, but there is a little more emphasis on winning the Big Ten,” junior linebacker Riley Bullough said. “Our main goal is to make it to Indianapolis, and this Saturday is our first step.

“We haven’t played our best football yet. We played one of the toughest non-conference schedules, so we are excited to kick off conference play,” head coach Mark Dantonio said.

Purdue will face a team who has notched 30-plus points for a school record 12 consecutive games, which is also the longest streak in the NCAA Football Bowl Subdivision (Second, Baylor, nine consecutive games). The last time the Spartans were held under 30 points was in a tight 27-22 victory over No. 19 Nebraska in 2014.

This does not bode well for Purdue because they are coming off back-to-back loses to Virginia Tech and Bowling Green respectively.

Since Dantonio has taken over the ship in East Lansing, the Spartans have played against the Boilermakers six times, coming out victorious all six of those times.

Despite the success the Spartans have received against the Boilermakers in recent years, it does not mean it has come easy. Six out of the last 10 games between the two schools have been decided by 10 points or less.

“Just like everyone else, Purdue has guys who can make plays,” Dantonio said.

“Purdue has provided us with some great matchups in the past,” Dantonio continued. “The past six games have been very exciting.”

“They have quality players, coaches, and they play a full football game,”Bullough said. “So, when anybody does that, they will have a chance to be in the game.

“We have to focus on playing all four quarters. It will be a tough game, but I have confidence in our team.”

Confidence is key, especially since the injury bug has bitten the Spartans so early in the year.

“We have all the confidence in the world in everyone on our team,” Cook said. “There is a reason why everyone is here.”

Adding on top of a full day, Saturday’s game will mark the 100th Homecoming celebration in school history.

“It’s exciting to have former teammates and friends back in Spartan Stadium,” Bullough said. “Being around the guys who helped build the foundation of this program, definitely means a lot to all of us.”

Michigan State is 65-31-3 on Homecoming weekend, and it has been 61 years since the Boilermakers have spoiled a Homecoming game in East Lansing.