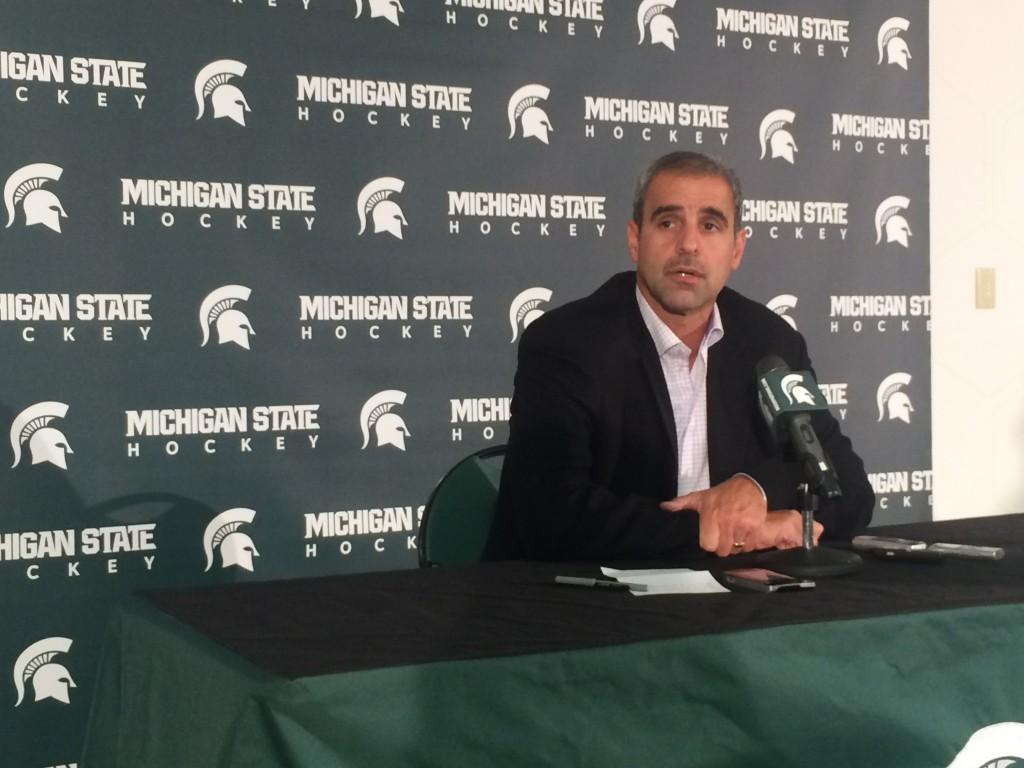 Head coach Tom Anastos and players met with the media Wednesday at Munn Ice Arena to discuss the upcoming season. Last year was a successful one for the Spartans, as they finished with a 17-16-2 record, which was good for second in the Big Ten, one spot ahead of Michigan.

A large part of the Spartan success last year came from then junior goaltender Jake Hildebrand. Hildebrand had an impressive 2.18 goals against average with a .930 save percentage. Having a goaltender who can put up numbers like that is something not a lot of teams have. However, Anastos does not believe his team will have to lean on Hildebrand as much as they did last year.

“That’s going to be a misconception that we’re gonna have to go out and prove,” Anastos said. “I really think this team has a chance as we come together to be a real solid team beyond just being good defensively or having a great goaltender.”

The Spartans had a few key losses after last season. Forwards Matt Berry and Brent Darnell, and defenseman Ron Boyd all graduated. But perhaps most importantly, defenseman Josh Jacobs left the team after only playing for one season under Anastos to start his professional career with the Sarnia Sting in the OHL.

Because of the freshman class that is came in, Anastos is still optimistic that those losses will not cause the team to fall off track. Defenseman Zach Osburn and forward Mason Appleton are two freshmen that the team is excited about for the upcoming season.

Appleton, who was drafted in the sixth round by the Winnipeg Jets, has been paired with junior forward Mackenzie MacEachern in a program that Anastos calls the Spartan Soldiers Program. The Spartan Soldiers Program is a program that pairs upperclassmen players with an incoming freshman in order to help that player develop. Learning the ropes from a veteran player such as MacEachern will be vital in Appleton’s progression as a player.

“He’s a role model,” Appleton said of MacEachern. “He goes about his school work and his on-ice stuff like a professional everyday and he’s a guy that I’m gonna learn a lot from over the course of the year.”

Something that the Spartans want to improve on this year is their scoring. The team scored 83 goals in 35 games last season, but are setting a goal of 100 goals for this year.

MacEachern, along with forwards Ryan Keller and Villiam Haag, are three players that want to provide more scoring for the team this year.

One phase of the game that could help the team score more goals is the power play. The power play got off to a slow start last season, but did improve as the year went on. If the power play does continue to improve, that could result in an extra goal per game.

The future is bright and the expectations are high for the Spartan hockey team. Captain Michael Ferrantino went as far as to say this season was NCAA Tournament or bust. The Spartans have a great core group of experienced players that are ready to help take this program to the next level. They have an All-American goaltender in Hildebrand that was reliable between the pipes last season and a freshmen class that is instrumental to the team’s success.

The Spartans open the season Sunday against Western Ontario in an exhibition game. Puck drop is scheduled for 4 p.m.