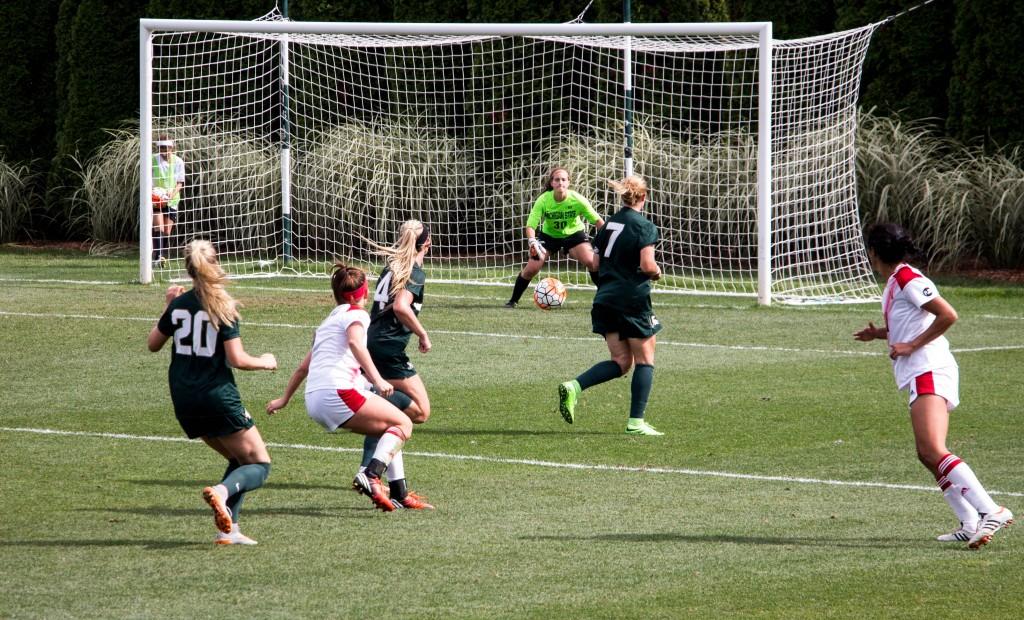 After defeating Iowa on Friday, MSU came into the game Sunday with improvements on offense. The Spartans had a 3-1-0 record against the Huskers at home, and kept their undefeated status after the matchup.

Despite missed possessions, passes and opportunities, the team played well.

MSU’s possession percentage was not as positive as Friday, but shot attempts remained fairly even with Nebraska at 13 and MSU with 14.

MSU head coach Tom Saxton said his team is doing better in critical moments in the game. Last season, MSU played four overtime games and came away with one win. The Spartans have won one and tied in three overtime games this year.

Redshirt senior Gabrielle Gauruder’s last-minute save in overtime kept the score even. The goalkeeper, as of Sept. 14, was second in the Big Ten in saves per game, posting a 4.29 average.

Gauruder said the defense did a better job of staying tight and keeping each other covered. Those improvements seemed to contribute to the team’s first win over Iowa since 2009.

“We’re only going up from here with our offense,” said redshirt senior Mary Kathryn Fiebernitz.

Fiebernitz said that as a veteran, this weekend was certainly a positive. In the past, the Spartans have lost double-conference play weekends like this weekend’s.

As time ticked away in Sunday’s game, scoring opportunities increased and shots creeped closer to the net with no scores.

Sophomore Jamie Cheslik recovered from an injury and narrowly missed a goal with 30 minutes left in the second half. Nebraska senior Jaylyn Odermann received a yellow card with 4:35 to play in the first half after a collision with Cheslik.

Nebraska found their way into many of MSU’s passes and forced the Spartans to battle into 20 extra minutes of play.

The Spartans will not get a break from big conference matchups after this weekend. MSU will face Michigan on Friday at 4 p.m.

“We’re gonna come out battling and we’re gonna take it to [Michigan] for sure,” Fiebernitz said.

It’s going to be a challenge, but Saxton thinks anything can happen.

“I think we’ll go into the game underdogs on paper, but like in any sport on campus, when you’re playing Michigan, throw the records out the window,” Saxton said.