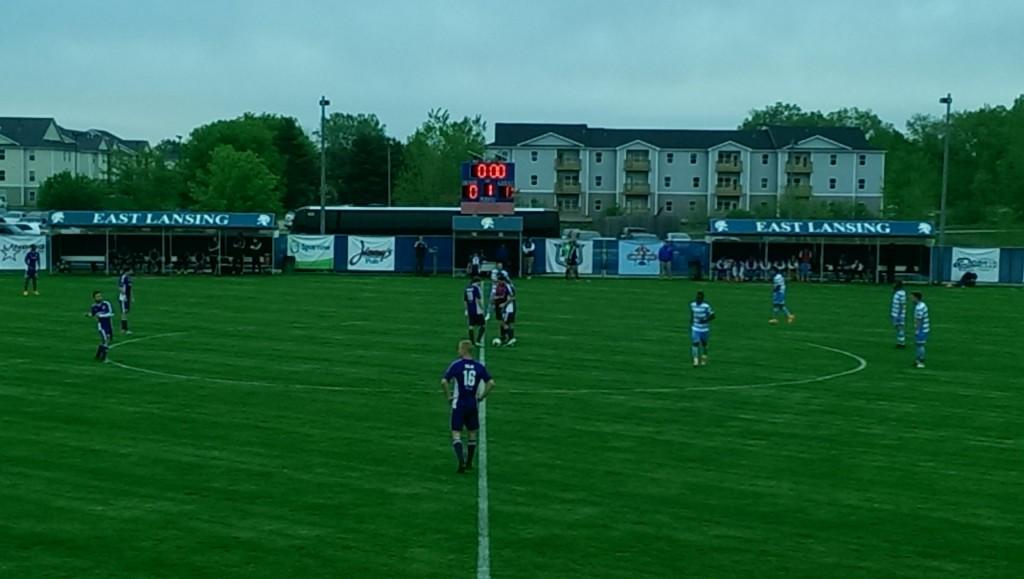 EAST LANSING, Mich.- Lansing United’s first ever trip to the second round of the Lamar Hunt U.S. Open Cup ended in a 1-0 defeat as the visiting Louisville City FC drove back to Kentucky relieved to have won a tightly-contested match.

Wednesday night’s game in Archer Stadium marked the furthest Lansing had ever progressed in the U.S. Open Cup, and the club boosted its game to the level of their USL opponents.

At the opening whistle blow, United came out with the fire of a motivated team. Just seconds in, captain and veteran striker Matt Brown was one on two at the corner of the box, but forced the hand of Greg Ranjitsingh, the Louisville keeper, with a dangerous shot to the near post.

Louisville then responded with a nice piece of buildup, leading to a shot from 22 yards by Louisville’s attacking midfielder Nate Polak. The outside of the foot attempt was no trouble to Quinn McAnaney, who would be busy the rest of the game.

Although the shots on target remained a measly figure throughout the opening half, that was no indication of the amount of quarrelsome play. The referee had several decisions to make, and issued three verbal warnings before issuing the game’s first yellow card to Aodhan Quinn of Louisville City. Quinn earned his yellow after clipping Stephen Owusu to curtail the Lansing United left wing’s slaloming run around and between the legs of Louisville midfielders.

In the first half, Louisville dominated the game in possession, 64-36, but Lansing created a similar amount of chances. Louisville forced six shots to Lansing’s four and four to one corners. Neither team, however, had that one chance needed to win the game.

That chance was spontaneously generated out of thin air just two minutes into the second half, when an intended cross from Louisville left midfielder Charlie Adams hit the body of Brown, leaving McAnaney the victim of a dipping deflection. McAnaney was leaning, and couldn’t rearrange himself before the ball nestled in the bottom left corner of the net.

“It really was an unlucky bounce and that’s kind of how the game goes sometimes. I think we defended well the whole game,” McAnaney said.

Louisville City continued to press and threaten, with their next chance being heroically spurned by McAnaney. As Magnus Rasmussen turned away from a defender after collecting a dribbling ball in a crowded box, McAnaney sprinted towards the ball in order to prevent an assured goal, flinging himself at Rasmussen and the ball. The left-footed strike hit McAnaney’s right foot and deflected over for the goal for a corner.

In the 70th minute, a bouncing ball off of a Lansing United corner fortuitously landed on the chest of Ben Lamb. However, Lamb was unsuspecting and his control was poor. The ball rolled into the hands of the keeper, and although Lamb was grounded by a defender, there were only minor penalty asks.

From that moment on, United took over possession and dominated the game. Like Louisville in the first half, Lansing was pushing up the field and every clearance fell directly to a United player. Lansing incessantly pressed forward, trying to create an opening at goal, but could not get a sniff.

On Louisville’s counter, a close shot from a tight angle forced another brilliant save from the feet of McAnaney. The ball rebounded onto the head of Rasmussen with an open goal to aim at. However, McAnaney spryly regained his footing to make his second save in two seconds.

Lansing United took no time to commend their keeper, but immediately broke out on the counter. Nigerian left back Ade Adeniyi found himself isolated with one defender on the left side of the box, and after a couple of stepovers, released a rocket to the near post. The crowd of 647 attendees jumped up in celebration, only to realize seconds later that shot had ricocheted off of the fence behind the goal into the back netting. Lansing still trailed 1-0 heading into two minutes of stoppage time.

United would find themselves with one more opportunity, as Yves Nzwanga, the match-winner from the first game against RWB Adria, split a pair of defenders and found himself with space to cross it from the right side into the box. Again, the crowd rose in optimistic anticipation, but the cross was misdirected and too high for an awaiting Adeniyi.

The whistle blew just after and Louisville FC progressed to face the Indy Eleven on May 27.

Throughout the game for Lansing, Stephen Owusu was a threat and forced dangerous turnovers from Louisville, sparking multiple counters. Both he and McAnaney were extolled by Rudland for their performances.

Despite the disappointing result, the loss was well received by Lansing United fans.

Proud of our boys tonight. Battled hard all game long. That's all we ever ask. #UnitedWeStand

“Hey, we’re not far off, right? You look at playing against a professional side, you lose 1-0 off an own goal, we chase and create chances at the end,” Rudland said. “I think it shows us and proves to us we have good players.”

Lansing United will kick off its NPSL season against the Indiana Fire on May 22. Despite the disheartening final score, both players and coaches for Lansing United focused on the positives of the match and expressed their desire to return and advance in the tournament next year.  To do so, Lansing United will have to win the Great Lakes Conference, a challenge they will embrace starting Friday.