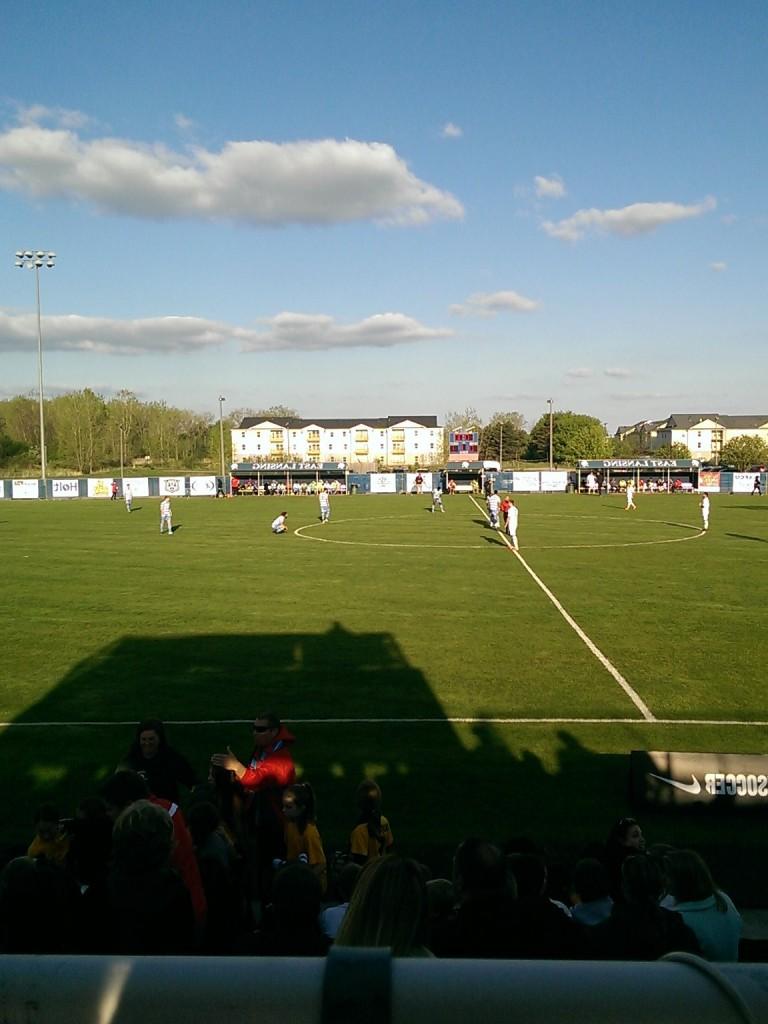 EAST LANSING, Mich.- In the first round of the Lamar Hunt U.S. Open Cup, Lansing United beat RWB Adria of Chicago 0-0 (4-2) in a home game at Archer Stadium. The 4-2 penalty shootout victory marks a strong opening in Lansing United’s first appearance in the Cup, which they reached by winning the Great Lakes Conference of the NPSL last year.

It is also only the second extra time game in the club’s short history, and they are now 2-0 in contests that went into extra time.

Quinn McAnaney, goalkeeper for Lansing United, was named the man of the match for his crucial decision making when it came to coming out for crosses, as well as his save in penalties.

“Yeah, I mean you had them in the back of your mind, to be ready for them. And that’s what you live for,” McAnaney said about the penalty shootout. “As a goalkeeper you want to be in those positions.”

Ten minutes before the 7:02 kickoff, the Sons of Ransom marched into the stadium in full supporter’s apparel and filling the ground with full voices. The Wednesday night game was attended by 487 fans, and had the feel of a big game, with an assortment of advertisement posters and sponsor announcements.

The night game started with a bang, with Lansing United conceding a corner kick just two minutes into the half. A wayward back pass gave Semir Mesanovic, defensive midfielder for RWB, the chance to swing in a corner, but McAnaney caught the ball.

United immediately countered, and a through ball sprung Matt Brown into an open field with space to run at goal. After out-sprinting a defender who mistimed his slide tackle, Brown was one-on-one but from a difficult angle and his shot was wide left, never threatening Piotr Sliwa, the RWB Adria goalie.

Maria Vucemilovic, the right mid for RWB, incessantly ran at Freddy Gomes, beating the Lansing right back multiple times to gain dangerous position and deliver crosses. McAnaney punched or caught both, but it was clear that RWB was controlling the game.

In the 19th minute, a Vucemilovic cross found its way into the vicinity of RWB striker Taylor Bond. Bond ambitiously attempted a bicycle kick but failed to make proper contact and the ball scurried behind for a goal kick.

The first shot on target of the game was not attempted until the 24th minute, when RWB’s right back, Antonio Aguilar, tried a 22-yard toe poke while under duress. The shot was easily caught.

RWB continued to press and in the 26th minute forced the best chance in open play. Vucemilovic split a pair of Lansing defenders on the right flank, and held off another would-be tackler to deliver a ball to the feet of Bond, making a diagonal run in the box. Bond stopped the ball as he tumbled over, setting up a great chance for his striking compatriot, Derek Huffman, who hit the underside of the bar with a shot that then rebounded out.

At the thirty-minute mark, Lansing coach Eric Rudland opted to switch Austin Dunn and Gomes. The move likely saved United the match, as Vucemilovic was not the same menace from there on.

“That was part of our plan with the back line, to be able to play Austin as an outside back,” Rudland said. “Just knowing that he’s a really good one v one defender and ball winner, so he was really able to neutralize their No. 20. That was a key tactical change for us in the match.”

United’s best chance came off of a Stephen Owusu cross that reached Brown, but he could not direct the awkward header onto frame. The half finished 5-4 RWB in shots, but while RWB had four shots that either were saved or hit the post, Lansing United had failed to come close.

The second half began frenetically, and both teams played long balls in hopes of a breakaway goal. Lansing defensive mid Jack Smith attempted a long pass to Andrew Hill but Hill was called offside by the line judge.

Shortly after, Mesanovic received a yellow for a late tackle, and Lansing worked their way downfield and earned a corner. James DeCosemo sent in a great cross that connected sweetly with the head of Jimmy Fiscus, but the RWB man marking the post cleared the ball meant for the bottom left corner.

A quick but controlled counter gave Daniel Paladini the chance to turn the tables, and he was so close to doing so. However, his shot whizzed inches above the upper right 90.

Lansing dominated the second half possession until both teams fatigued, and both teams appeared resigned to extra time as the game wore down. The last two well-defined chances belonged to Vucemilovic and Bond in the final five minutes, but Vucemilovic’s shot was gloved by McAnaney while Bond fired into the side netting.

In extra time, RWB received an early scare after a first-time volley directed into the grass from Owusu bounced awkwardly and Sliwa’s fingertips sent the ball into the bottom of the post, and again back out of the goal. However, the play was irrelevant because Owusu was judged offside.

The second half of extra time bore several dangerous crosses from corners, all from RWB. However, a header from Baciu and a subsequent Mesanovic corner were both dismissed by the alert goalkeeping of McAnaney. The final time whistle blew and the teams huddled before the game resumed, penalties awaiting.

McAnaney stepped between the posts first, and saved a poorly taken penalty from Aguilar. The ball ripped on the grass to McAnaney’s midriff as the keeper easily did away with the penalty. Sliwa did not have the same result, as Marcelo Petit, an influential sub for Lansing, hit a better penalty that dipped below Sliwa’s gloves.

After two more kicks were both converted, Baciu stepped to the spot and rocketed his powerful attempt above the crossbar. Then, Brown’s converted penalty for Lansing put Mesanovic in a do-or-die position.

Mesanovic slotted the ball inside the right netting, sending the keeper the wrong way. So, Yves Nzwanga, a substitute during extra time, was assigned the taking of the potentially game-winning penalty. Nzwanga sent the ball into the bottom left corner, millimeters past the fingertips of Sliwa’s right hand.

Nzwanga ran off the field in celebration, pursued by his teammates and Lansing United fans. After the game, the players sang and chanted, “We want the cup,” with members of the Sons of Ransom.

“For us as a club, to be in the tournament is monumental and then to get the result tonight is just a great thing moving forward,” Rudland said.

Lansing United will battle Louisville City FC in the second round of the U.S. Open Cup. The game will take place next Wednesday for 7:00 p.m. at Archer Stadium in the East Lansing Soccer Complex.