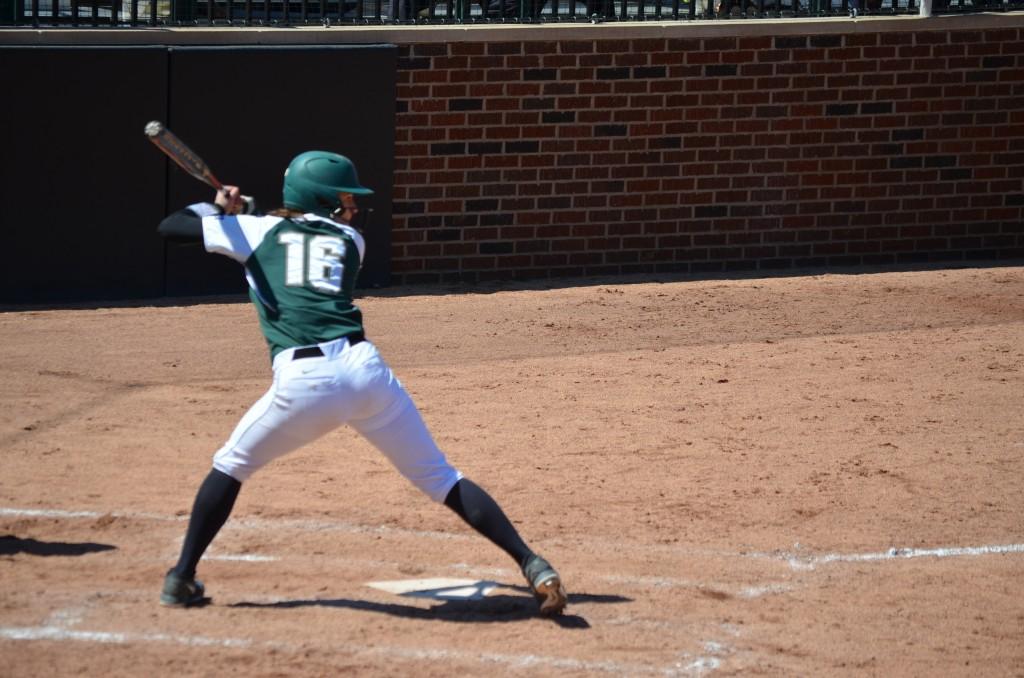 After losing in game one of the three-game set with the Buckeyes, the Spartans again fell at the hands of Ohio State 8-4. Senior Stephanie Sanders drove in three of the four Spartan runs, but it was not enough to come up with a win.

The Spartans fall to 1-10 in B1G play and are now 16-23 on the season. With the win Ohio State improves to 21-16 on the season and 5-6 in B1G action. It is always tough to take a loss, but head coach Jacquie Joseph says that the Spartans let this one get away from them.

“I thought that it was our game right through there to the fourth inning,” Joseph said. “We had great starting pitching and in the fourth inning I thought the game turned when we left the bases loaded. It gave them the momentum and then our pitcher came out and just was completely different in the top of the fifth when they scored four.”

The start of this game was a nice change of pace for the Spartans, who have found themselves behind early in games so far the season. In the bottom of the first, Kassidy Kujawa got things going as she was able to draw an early walk. Back-to-back home runs from Sanders and McKenzie Long helped the Spartans to a 3-0 lead coming out of the first inning.

Redshirt freshman Kristina Zalewski started in the circle and got off the a very good start, retiring six-straight Buckeye batters in the second and third innings and allowing no runs through four.

Zalewski was involved in a frightening incident about midway through the game when an apparent line drive off a buckeye bat came right back towards Zalewski, hitting her in the head. After taking a moment to recuperate, she was able to stand up and walk off the field on her own power. She would return to the game just one inning later.

“It takes a lot of guts and courage to go back out after that happens,” Joseph said. “It can shake you and so I give her a lot of credit for going back out there and closing the game for us.”

Things took a nasty turn for the Spartans in the fifth and sixth innings. In the top of the fifth inning, Ohio State fought back bringing four runs home. Keelia Nester started things off as she smacked a triple to left field. Nester would later score off a sacrifice fly off the bat of Taylor Watkins. Ohio State would take the lead when Maddy McIntyre hit her ninth home run of the season, giving the Buckeyes a 4-3 lead.

Ohio State wasn’t done in the sixth as they were able to double their lead, going up 8-3 on the Spartans going into the final inning of play.

The Spartans didn’t go down without a fight in this one. Senior Ellie Stoffer got on the basepaths with a single to left to start the bottom of the seventh. Alyssa McBride, who has held hitless in game one of the series, grounded into a fielder’s choice that saw Stoffer get thrown out at second. A bases loaded walk to Sanders brought McBride home and cut the Buckeye lead to 8-4.

With the bases loaded, Long stepped up to the plate hoping to be the hero. With Spartan fans on the edge of their seats, Long launched a high fly ball to center field. Unfortunately, Ohio State center fielder Caitlin Conrad was camped right under it and saw her team take a second straight victory from the Spartans, who fell 8-4.

The Spartans will take on the Buckeyes in the final game of the series Sunday at Secchia Stadium. Coach Joseph always stresses taking advantage of all opportunities you get, that’s exactly what the Spartans will need to do as they look to avoid being swept for the second straight series.

“We have to capitalize when we have opportunities,” Joseph said. “We started off great. We scored first, we had great starting pitching and the game was right there for us to take and we didn’t take it. We let our opponent gain momentum and gain confidence and it came back and bit us in the butt.”

First pitch in game three of the series is scheduled for 1 p.m.