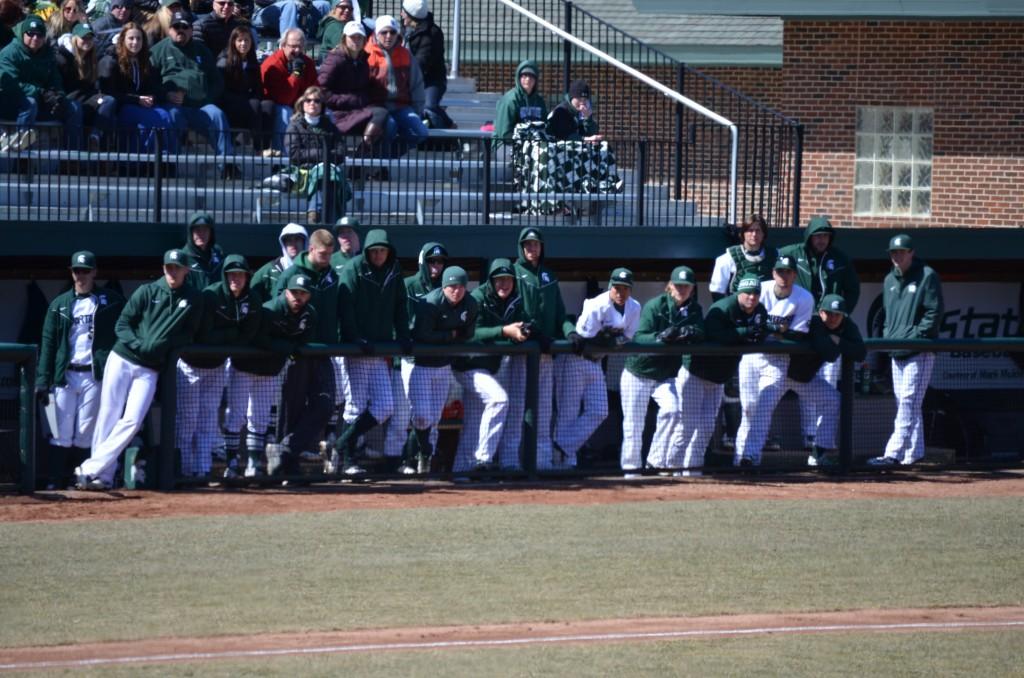 On a cold and cloudy day at McLane Baseball Stadium, Michigan State had the last run against Western Michigan.

“A little disappointed in the way we played today honestly. I thought we didn’t swing the bat very well. Defensively I thought we played okay, probably until the eighth inning,” head coach Jake Boss Jr. said. “You know the way the game works, you give away a couple big plays at the wrong time and you put yourself in a position where you are having to fight and claw back.”

For the mid-week game, Boss decided to start the 6-foot-5 lefty freshman, Alex Troop, who came into the game with a 5.23 ERA in three starts.

The Broncos wasted no time getting to Troop, as they went to the plate swinging and hit the ball hard around the park. Unfortunately for the Broncos, many of their line drives were hit right at the Spartan outfielders.

“I thought Alex [Troop] was okay. He did better than last week, but he’s kind of adjusting to college baseball right now,” Boss said. “He is a really talented kid who I think has a really really high upside and a bright future to him.”

Michigan State would take an early lead in the bottom of the first inning when senior catcher, Blaise Salter, would hit a line drive to left field and the ball skipped off redshirt sophomore outfielder, Tyler Frank, which would score redshirt senior infielder, Mark Weist, from first base.

The Broncos would answer in the top of the third inning as an opposite field hit from senior outfielder, Jordan Tillman, would bring in junior outfielder, Drew Farmer, to tie the game at 1-1.

With Tillman on third, junior catcher, Brett Sunde, would hit a line drive shot right to senior outfielder, Anthony Cheky, but Tillman would tag up and score from third to give Western Michigan a 2-1 lead.

The Spartans would respond in the bottom of the third as Salter would again drive in senior first baseman, Ryan Krill, from second base off a line drive to left field to tie the game up at 2-2.

“Blaise had a big day, and if we’re going to be good offensively our seniors have to be good for us,” Boss said.

Michigan State would take the lead in the bottom of the fifth as junior outfielder, Cam Gibson, would start the inning off with a walk and then steal second base. Gibson would then advance to third on a throwing error on a pick-off attempt by freshman pitcher, Peyton Gray.

With a runner on third base, Krill would hit a fly ball out to right field, which would allow Gibson to tag up and score from third base to give the Spartans a 3-2 lead.

The Broncos would answer back in the top of the eighth as Sunde would hit a double down the left field line, which would bring in two runners to give Western Michigan the 4-3 lead.

The Spartans would go down 1-2-3 in the bottom of the eighth and then hold the Broncos scoreless in the top of the ninth.

The man that drove in the first two runs for Michigan State would lead off the bottom of the ninth and Salter would come up big again as he hit a shot into the left field gap, which would put him in scoring position on second.

“I have probably faced Gabe [Berman] 100 times in my life, and I know he’s got a really good fastball on him and he likes to attack early with the fastballs and he’s got some good velocity on it,” Salter said. “I know [with] two strikes, his putaway pitch is a fastball up, so I was hoping maybe he would do it and thankfully he left one in the zone where I could put a good swing on one.”

Redshirt senior, Ryan Richardson, would get hit by a pitch to put runners on first and second for Cheky, who would hit a double to right field that would just just fall over the head of the right fielder. Pinch runner, Chase Toth, would come around to score to tie the game up at 4-4.

With runners on second and third, Western Michigan would intentionally walk freshman outfielder, Brandon Hughes, to load the bases.

With the bases loaded, coach Boss went to his bench to bring on redshirt freshman, Chad Roskelly, to pinch hit for Troop.

“I thought I was going in to catch and then they told me to grab a bat and I was hitting. It was kind of a surprise,” Roskelly said.

Roskelly would foul off a few fastballs and work the count in his favor, until he caught a pitch that would be hit deep enough to the centerfielder, that would allow Richardson to tag up and score from third to give Michigan State the 5-4 win.

“Always a positive when you win,” Boss said. “I didn’t think we played well and Western Michigan had a lot to do with that so give those guys a lot of credit.”

The Spartans get back into Big Ten play on Friday at 3:05 pm against Northwestern (8-22 overall) at McLane Baseball Stadium.