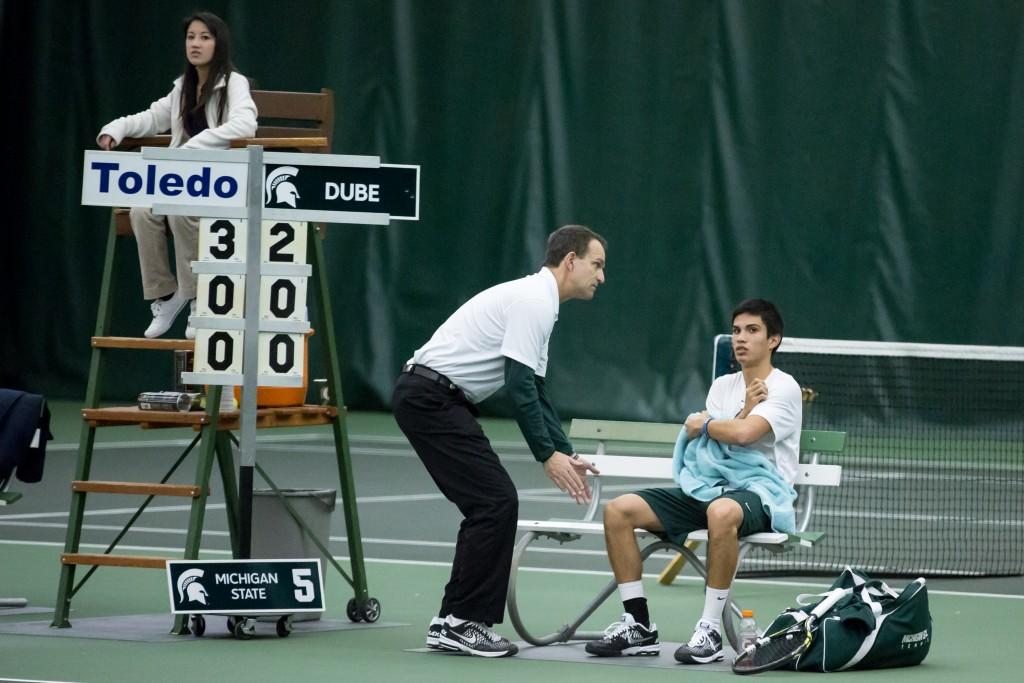 It was a different atmosphere Tuesday afternoon at the MSU Indoor Tennis Facility.

Mullane then walked up the rising bleachers towards the other side of the court where the University of Michigan men’s team was practicing. He put his hands up to his mouth and shouted with a boom at the players in maize and blue, “Gooo state! Go green!”

It did not stop other players like Michigan State’s Alex Kim and Michigan head tennis coach Adam Steinberg from curiously peering  over to the Michigan practice.

For seniors Doug Zade and Harry Jadun, the Michigan match has been circled on the schedule for quite sometime since they have not seen a home win over Michigan throughout their stints at Michigan State men’s tennis.

“It’s the last year so I want to get it done,” Zade said. “Tomorrow we’re going to come out pretty fiery.”

“The last two we played agains them came down to the last match in the third set and we lost both of those,” Jadun added. “We gotta go out there and play loose. If we put pressure on ourselves, it’s going to be tough because we’re going to start floating the ball and not hitting our shots.  If we play our game, we should get out of here with a ‘W,'”

Head coach Gene Orlando hinted on one area for the Spartans that has brought them down over the last few weeks.

“You gotta win the big points and put yourself in position to get the game point,” he said. “I think in the end, we’re close with every single team. It’s about winning those big points.”

“Coach is doing the coach thing where he’s trying to downplay it so we don’t put pressure on ourselves. We know it’s a big match and we want to step up and play our best for it,” Jadun explained.

At the end of Tuesday’s practice, the Michigan State men’s team gathered in a circle and laid out the roadmap for Wednesday’s game.

“We need to walk in and feel the pressure in our place,” Mullane stated. “We have to go out there and get it tomorrow.”

The match kicks off at 4 p.m. tomorrow. Michigan State is expecting a full, healthy lineup with Mullane slated to play singles. Jasper Koenen will take the No. 6 singles spot for the Spartans.