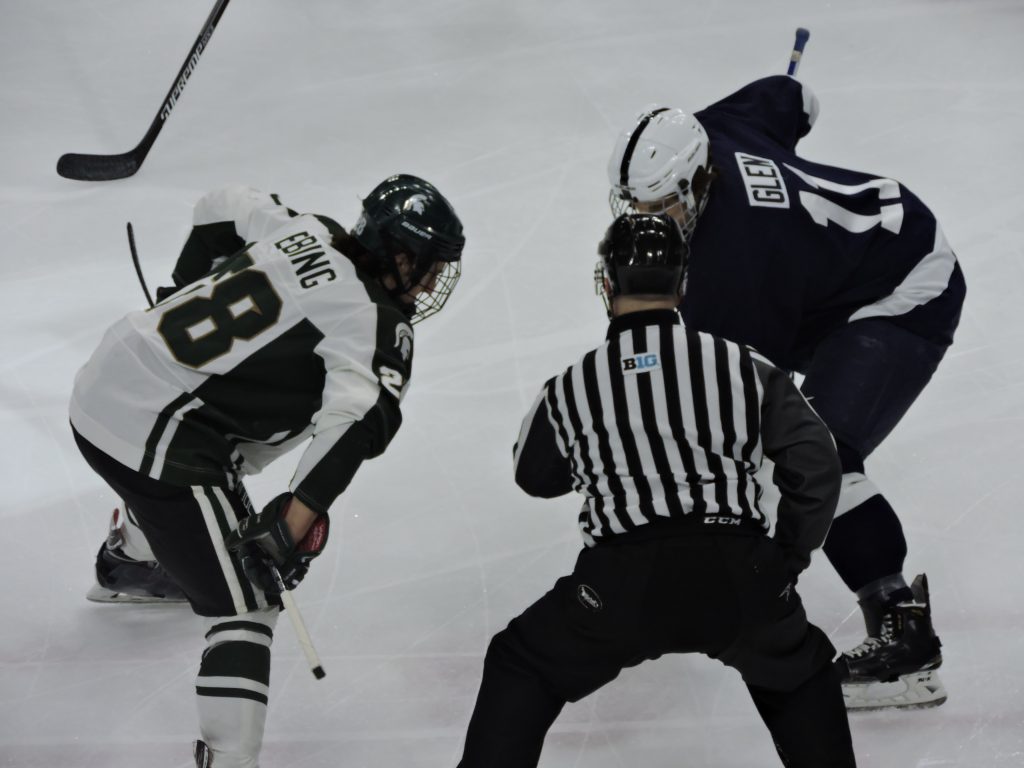 EAST LANSING, MI — Senior day was an emotional one for the three Spartan seniors Ed Minney, Carson Gatt and Dylan Pavelek. Despite a stellar performance by Minney in goal, Michigan State (11-19-2) fell to No. 16 Penn State (14-13-5), 3-2 on Saturday in front of 6,368 fans at Munn Ice Arena.

Michigan State’s senior day ceremony lasted around five minutes but took place around 20 minutes before the game. This gave a bit more time for the Spartans to mentally regroup following the ceremony.

“After that to come back in, coach kinda like went through the keys of the game, starting lineups and then it was just kinda going out and playing hockey like usual,” said Gatt.

Despite a quick start, the Spartans went scoreless in their first two power play attempts in the first period.

Penn State was the first to cash in on the power play as Chase Berger sent a hard shot from the right circle that found its way past Spartan netminder Ed Minney.

The Spartans would pull even though thanks to the same man that got the scoring started on Friday. After forcing a turnover at the blueline, freshman Brody Stevens had a breakaway from center ice in.

All alone on Peyton Jones, Stevens dipped his shoulder and added a headfake to get Jones moving right before shooting it to the left side of the net. Stevens’ second goal of the season was also his second in as many games.

The Nittany Lions struck back however on a four-on-four situation, Andrew Sturtz sent a hard shot that beat Minney high glove-side with just under 18 seconds to play in the period. Spartan coach Danton Cole challenged the play on the basis that Penn State was offside when they first entered the zone.

After a lengthy video review the call on the ice stood and the goal was upheld. Sturtz’s goal marked his 100th career point, making him only the second Nittany Lion to ever reach the century mark.

The second period saw a near domination by Penn State in more ways than one. They played a majority of the period in Michigan State’s zone and dominated the shots on goal 17-7. Less than five minutes into the second period Alex Limoges tipped a point shot from Kevin Kerr near the left side of the Big Ten logo.

The redirection found its way past Minney to extend the Penn State lead to 3-1. The Spartans were lucky that their deficit was only two as the Nittany Lions had chance after chance on Minney.

Michigan State had two power plays during the period, but failed to convert. Consequently, the Penn State penalty kill as exceptional at closing down passing lanes and stuffing the Spartans. Their effort was rewarded with two short-handed breakaways which they failed to convert on.

Despite their lackluster performance in the second, MSU came out much stronger in the third. Cole Hults was assessed a holding minor just over six minutes into the final period and finally the Spartans were able to capitalize.

Patrick Khodorenko received a nice pass on the right side and sent a hard shot over the glove to pull Michigan State within one.

“Lewy [Lewandowski] dropped to to Taro [Hirose] and he just made a pass almost across the blue line as we were coming in on the power play and I just took a shot and it went in,” said Khodorenko.

Michigan State continued to push hard in the third period and had several quality chances including a cross-bar struck by Lewandowski. The best chance however came late in the game while MSU was on a penalty kill.

Sophomore Sam Saliba and junior Brennan Sanford came into the zone on a two-on-one, with Saliba making a nice feed over to Sanford short side. Sanford made a clean shot on net but failed to get enough elevation. This allowed Jones to slide over and make a critical pad save.

Penn State held on to win by a final score of 3-2.

While the Spartans are now locked into a last place finish in the Big Ten, senior Carson Gatt says that this team is certainly not playing like a last place squad.

“Anyone who has come out and watched us play would say, ‘That’s not a team that plays like they should be in last place in the Big Ten’,” said Gatt.

The Spartans will finish the season with an 8-7-1 record in East Lansing and have been improving steadily under first-year coach Danton Cole.

“We talked about it in the beginning, when you want to build the way a team plays its not just, ‘Hey four practices and here it goes’, it’s like building a pyramid. The base is pretty big and pretty wide so there’s a lot of habits and concepts that we’ve been working on,” Cole said. “I just think our competence up and down the ice is better.”

For the seniors though, they hope that their lasting legacy here at MSU will be the laying of the groundwork for the future of Spartan hockey under Cole.

“I was fortunate enough to have coach Cole for two years before I came here, I kinda knew what to expect and I could kinda let the younger guys know what was going to happen so it was definitely a transition culture wise,” said Minney. “It was a change for everyone but it was nice to know what I was coming into for my senior year.”

Said Gatt, “To establish a winning culture, after last night’s game coach wrote on the board, ‘Happy but not satisfied’, and I think that sums it up real well.”

“He always talks about, coach does, about how you have to hate to lose more than you love to win and kinda getting that into our attitude and mindset, and I think we’ve done a good job of that so far,” Gatt said.

Certainly the Spartans’ mindset this season has been a vast improvement over last season and is a major positive for Cole and the staff.

“I like where they’re at mentally, we might not have, you know, the talent or the maturity and age yet to be a championship team but the mentality in the locker room, I’ve been around a lot of championship teams and these guys are right with it,” Cole said. “They don’t get discouraged, they are working, their confidence is good and all those things have built over the year.”

Michigan State will close out the regular season in South Bend against the Notre Dame Fighting Irish before the start of the Big Ten tournament.

The Spartans will face Ohio State, who clinched second place with a shootout win against Minnesota on Saturday, in Columbus for a best-of-three series in the first round.