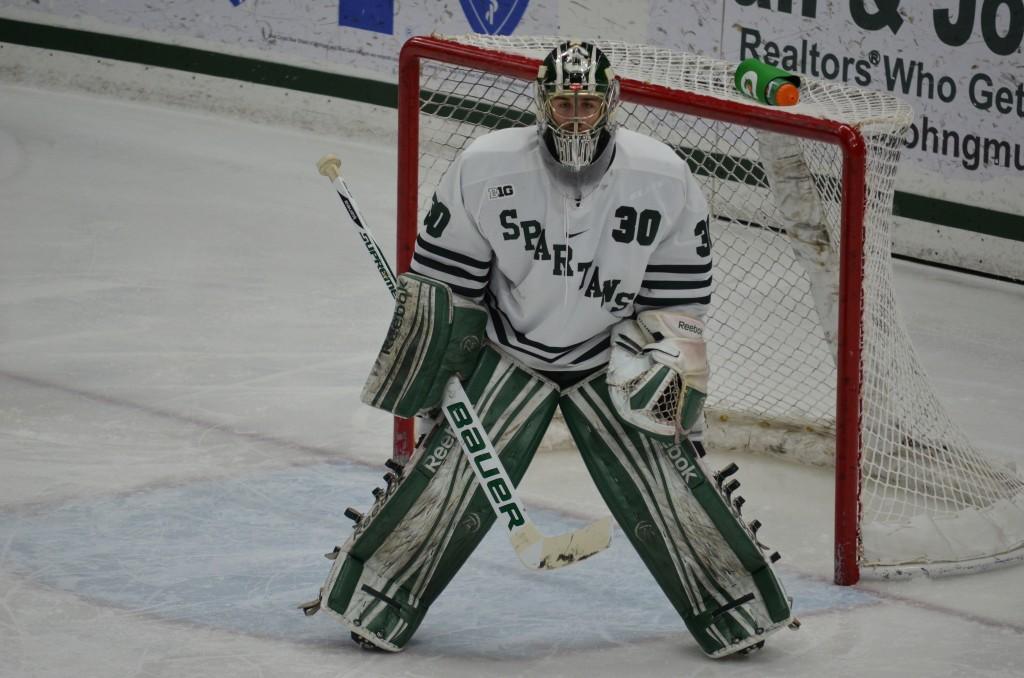 Just a few days after taking home a number of Big Ten honors, goaltender Jake Hildebrand has the potential to take home an even more prestigious honor. Wednesday, it was announced that the junior from Butler, Pennsylvania was a finalist for the Mike Richter Award.

The award is handed out annually to the top goaltender in the nation. Connor Hellebuyck of UMASS Lowell won the inaugural Mike Richter Award last season.

Hildebrand, who was nominated for the award last season, finished the regular season tied for ninth in save percentage with a .930 mark. His 2.12 goals-against average is good enough for 25th in the nation.

Hildebrand also ranks seventh with 961 saves and his career-high six shutouts ties him for second-most in the country. He has allowed two or fewer goals in 20 of his 34 starts.

In 2015, Hildebrand is first in the nation with a .950 save percentage, sixth with a 1.55 goals-against average and second with five shutouts.

McIntyre is a finalist for the NCHC goaltender of the year award. The junior from Thief River Falls, Minnesota is the all-time leader at North Dakota with a .924 career save percentage.

The 22-year-old is tied for first in wins with 27, sixth with a .932 save percentage, ninth with a 1.97 goals-against average. McIntyre was also a sixth-round draft pick by the Boston Bruins in 2010.

Hayton is a freshman at St. Lawrence and has the highest save percentage in the country at .939. His five shutouts set a St. Lawrence record and tie him for fifth most in the country. The Denver native’s 1.90 goals-against average is sixth overall.

Phillips of Michigan Tech ranks near the top in most goaltending categories. He’s He is tied with McIntyre for most wins with 27 and has allowed two goals or less in 29 games this season.

The junior from Ontario ranks second with a 1.61 goals-against average, third with a .938 save percentage and tied for fifth with five shutouts. Phillips was also drafted in the seventh round of the 2012 draft by the Winnipeg Jets.

Yale’s Lyon might be the frontrunner for this award.

The sophomore has set Yale single-season records and also leads the nation in goals-against average at 1.58, save percentage at .939 and shutouts with seven.

Lyon and Hildebrand both have 17 wins, which ties them for 13th in the country.

The winner of the second annual Mike Richter Award will be announced during the Frozen Four in Boston in a few weeks.