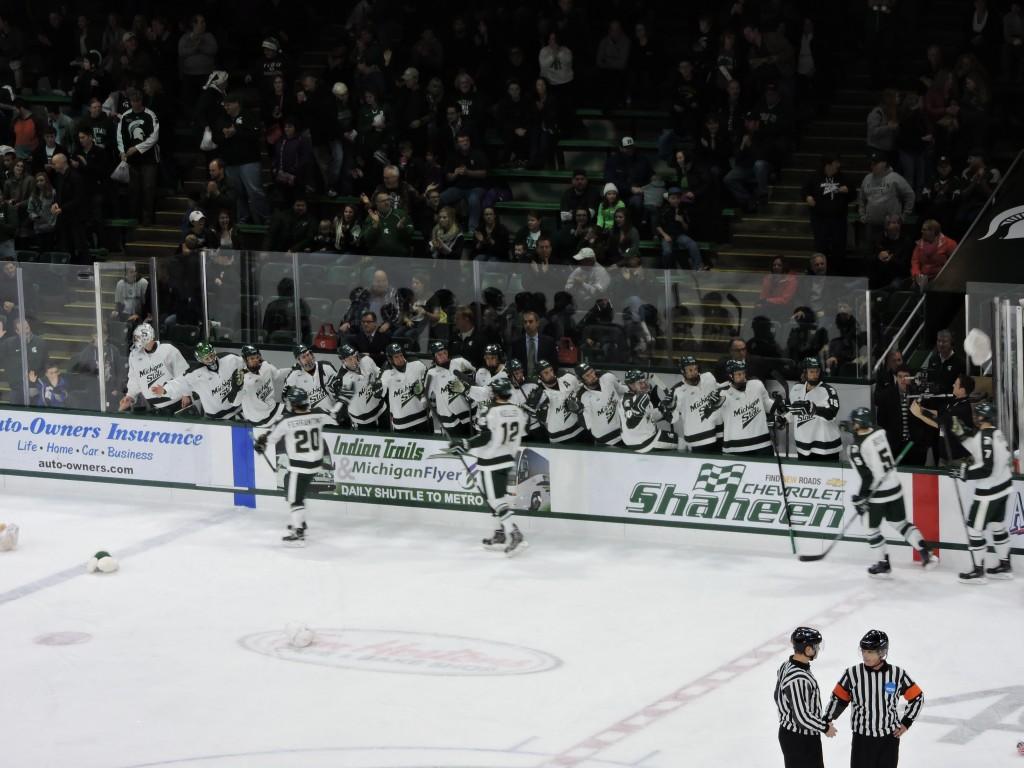 Earlier in the week, the All-Big Ten Hockey Team was announced. Big Ten coaches and a media panel voted on the positions. Five different Spartans were honored for their play during the Big Ten season.

Junior Jake Hildebrand was named Big Ten Player of the Year, Big Ten Goalie of the Year and was also named to the First Team All-Big Ten.

“I think it’s just a team thing,” Hildebrand said. “I think our team has played great defense all year and I think my statistics have reflected on that. I’m just happy the team is where we are right now.”

In 20 conference games this year, Hildebrand went 11-7-2-2, yielding just 39 goals. His 1.94 goals-against average and .940 save percentage were the highest in the conference. Hildebrand’s five shutouts were also tops in the league. Considering the Spartans gave him just 47 goals of support, which was the second fewest in the league, Hildebrand is the biggest reason for his team finishing in second place.

One of the more overlooked aspects of Hildebrand’s game is his workload. The Spartans played a total of 1,210 minutes in conference play this season. Hildebrand was standing between the pipes for 1,204:27, or 99.5% of that time.

Defenseman Travis Walsh was named to the Second Team All-Big Ten. The junior from Haslett, Michigan tallied six assists in 15 Big Ten games before fracturing his jaw after blocking a shot against Minnesota on Feb. 26.

On the season, Walsh has 14 points, which is a career-high and still stands as the most points from a Michigan State defenseman.

Walsh’s fellow blueliner, Josh Jacobs, was named to the All-Freshman Team. The 2014 second-round draft pick of the New Jersey Devils had four assists in conference play, but led all defensemen in shots with 34.

Jacobs also led the entire Big Ten in blocked shots with 54 and leads the entire country in blocks per game with 2.70.

Senior Matt Berry was named an honorable mention. The senior averaged just under a point per game in 17 Big Ten contests.

Lastly, captain Michael Ferrantino was one of six players to be honored with the Big Ten Sportsmanship Award.