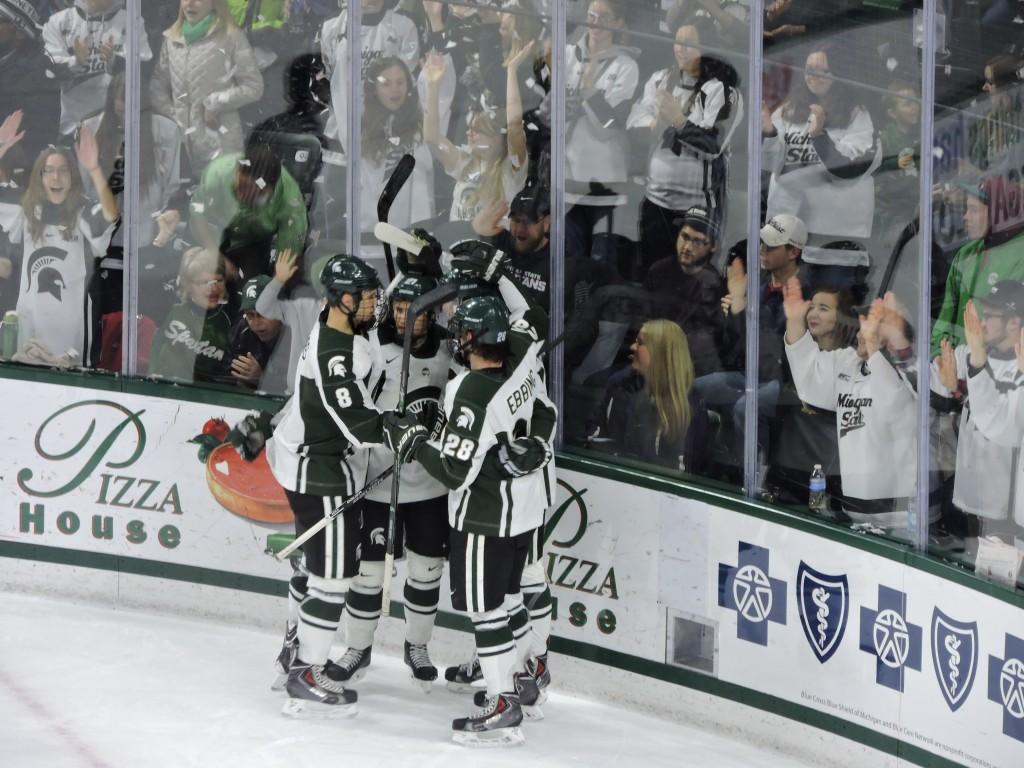 The Spartans spent most of their Saturday scoreboard watching before they faced off against Wisconsin. One domino fell into place early with Penn State completing a sweep of Michigan. Two more dominos had to follow suit if the Spartans were to finish the night in first place in the Big Ten.

The next piece of the puzzle fell in place during the second period of Michigan State’s game in the form of Ohio State coming from behind to beat Minnesota 5-2.

Head coach Tom Anastos did not want to tell the team.

“It was a conscious decision to not bring it up,” he said. “We did know, I wasn’t interested in bringing it up. I didn’t want to add any pressure and I wanted the other coaches’ opinion.”

But most of the players already knew.

“I tried not to let it get out as much as I could to keep everyone focused on this game,” captain Michael Ferrantino said. “You never know what can happen you start thinking the wrong way thinking about what everyone else is doing. Then you let your game slip. We were trying our best to focus on ourselves.”

Despite not telling them about what was now at stake, Anastos did deliver a message to the team during the break.

“This was the most important 20 minutes of the season and we needed to pull together and make sure that we stayed together, we worked together and stay with the process,” he said. “Don’t focus on the outcome of the game, just win your next shift. I thought we did a pretty good job of that.”

The team, rejuvenated, took command of the game for good in the third period.

Mackenzie MacEachern and Ryan Keller scored 54 seconds apart in the early part of the period to give the Spartans a 3-0 lead and they never looked back.

After their 3-0 win, the Spartans sit in sole possession of first place in the Big Ten.

“It feels good,” Ferrantino said. “It feels nice. It’s been a long time coming, we’re excited about putting together a good stretch, but there’s one more week to go.”

“I think it’s really special,” said Hildebrand, whose sixth shutout tied Chad Alban for fifth most in a season in Spartan history. “It just shows a lot about the character of this team and how we’ve stuck to the process all season.”

After a scoreless first period, Matt Berry broke in on a 2-on-1 and beat Landon Peterson, who Wisconsin coach Mike Eaves decided to start over Joel Rumpel, to the low blocker side. That marked three goals on the weekend for the senior from Canton, Mich. and it turned out to be his second game-winning goal of the weekend.

Wisconsin spent much of the second period knocking on the door, earning three power plays and firing 16 shots in the frame, but it could not solve Hildebrand.

“Second period there was a lot of penalties and it killed the flow of the game, but I think we got out of our rhythm a little bit,” Ferrantino said. “We wanted to make sure we came out with a statement in the third. Once the second goal went in I think you saw us relax a bit.”

The insurance marker came in the form of MacEachern’s powerplay goal four minutes into the final period.

Keller’s goal 54 seconds later off a brilliant feed from Joe Cox, who was on his knees, put to rest any doubt that the Spartans were on their way to the top of the standings.

“Those were pretty big goals,” Anastos said. “I think that they took a little bit of pressure off and I thought at that point, we could continue playing the way we wanted to play without feeling too much pressure of playing in a tight game.”

The Spartan special teams were solid again in the win. The power play was 1-for-4 and the penalty kill was a perfect 4-for-4.

The win, though, was far from perfect.

“I thought the game was like a root canal,” Anastos said. “We made some bad decisions and turned pucks over and we didn’t have good rhythm. There were parts of the game I thought we looked pretty good and other parts not so good. I thought it was an ugly win, but that’s a good thing.”

The team can enjoy this win briefly because this upcoming matchup against the Wolverines is important for both teams.

It just so happens that the top four teams are playing each other this weekend and nothing is decided in the standings.

It should be an exciting sprint to the finish line from here.