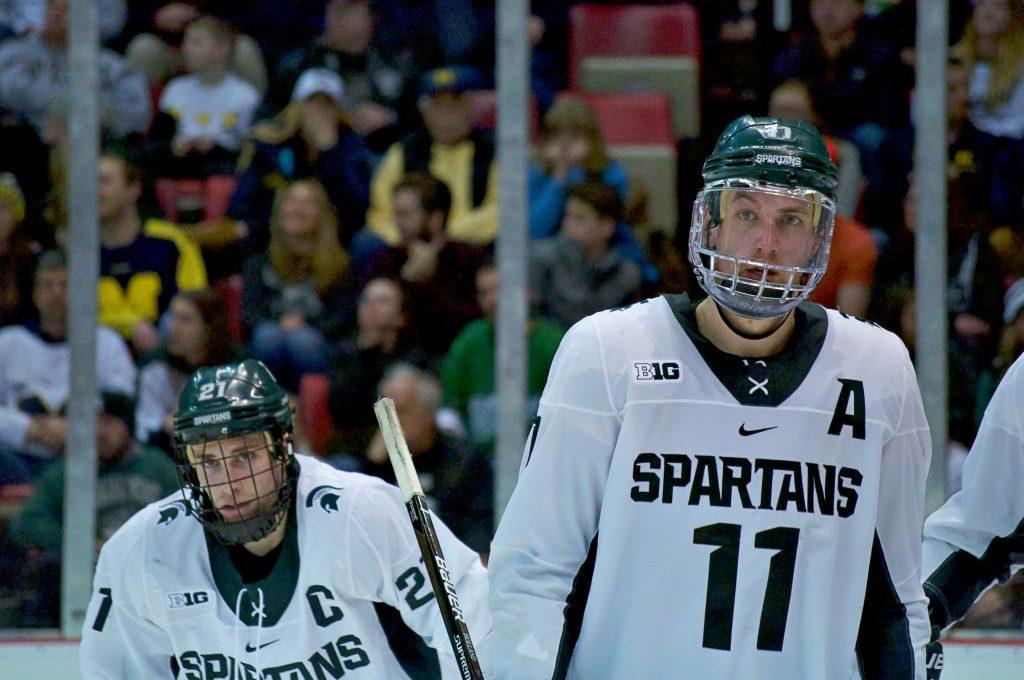 A night after a close 3-2 loss to No. 14 Ohio State, Michigan State again fell just short in a 4-3 loss to the Buckeyes Saturday night at Munn Ice Arena.

The two teams spent the first 20 minutes of play feeling each other out. The Spartans managed to record nine shots on goal while the Buckeyes had six.

One of those six shots for the OSU resulted in a power play goal with 7:43 left to play. Defenseman Matt Miller collected the puck at the right point and rifled a shot that Minney got a piece of. However, it wasn’t enough as the puck trickled through Minney’s legs for Miller’s second goal of the season.

The Spartans had three power plays of their own in the opening stanza but, as it has all season, the power play struggled. Late in the period, OSU’s Sasha Larocque took a seat in the box for roughing Sam Saliba after a whistle.

On the ensuing power play, the Spartans had two quality chances. The first came when sophomore defenseman Zach Osburn fired a slap shot from the top of the left circle that rang off the post. The second came when Mason Appleton threw a puck out in front of the net from below the goal line. The puck took a bounce off of some skates and seemingly sat still right in front of the net. No Spartan could reach the puck and the period went on.

The two teams began to figure each other out in the second period and with that, the goals came.

The Spartans struggled on the power play through the first 20 minutes. Conceding a goal to the buckeyes on their only penalty kill of the period. Because of a carry over penalty to captain Joe Cox, the Spartans began the second with a man down.

Ohio State struck first with just seven seconds remaining on the Cox penalty. Nick Schilkey cut down the right side boards and sent a wrister short side over the shoulder of Ed Minney to double the Buckeye lead.

Not even a minute later, Ohio State scored yet again. Sophomore forward Brendon Kearney registered his first of the season to put the Buckeyes up 3-0.

Seemingly out of it, the Spartans fought back. Just under 60 seconds after OSU took the commanding lead, Carson Gatt took a shot from the top of the left faceoff circle that was tipped by Logan Lambdin. The freshman’s fourth of the season got MSU on the board with 17:24 left in the period.

Appleton had been relatively quiet up until the closing seconds of the second period. The Sophomore star had been involved in one potential scoring chance earlier in the game, but other than that he only managed two shots on net through the first 30 or so minutes of play.

The Winnipeg Jets’ draft pick came though late in the second period with his only shot of the period. This shot, however, resulted in a goal. With a wrist shot over the right shoulder of OSU goaltender Christian Frey, Appleton recorded his team lead 11th of the season to pull MSU within one.

The Spartans again got off to a rocky start at the beginning of the third period. Ohio State doubled their lead just 1:48 into the frame. Buckeye forward Matthew Weis collected the puck right off of an offensive zone faceoff and was able to score the eventual game winner before Minney was set to attempt a save.

The Spartans were able to pull within one with six minutes to play. Hirose showed great patience as he out-waited a Buckeye defender for just the right amount of time before he sent a pass to Saliba for the easy one-timer.

After the game, coach Tom Anastos was quick to point out that the pass Hirose made was one that not a lot of players could make.

MSU had plenty of chances with the goalie pulled in the final minutes of play, but were unable to put the puck in the net.

Ohio State went on to win 4-3 and completed the sweep of Michigan State.

Despite the loss, there were several positives that MSU took away from the game, the first being defenseman Carson Gatt. The junior assisted on two of the Spartans three goals and played a key role in shutting down Ohio State’s top lines.

Aside from that, the Spartans fought back twice after giving up early goals. Something that Cox in particular noticed about his team.

“The thing I took out of that is how the guys kind of rallied,” said Cox. “You saw the guys kind of fight back into that game where maybe a lot of people in the stands kinda thought it was already over. But that’s just the kind of group we got.”

Up next for MSU is No. 9 Penn State. The Spartans welcome the Nittany Lions into town next weekend for a two game series.