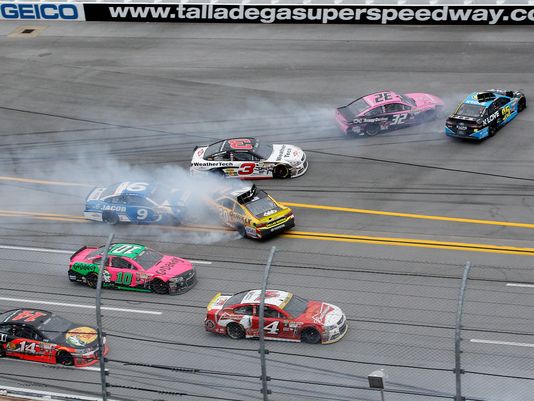 Joey Logano: “I saw the [caution] lights come on when I was still in the lead, and I thought we had [the win].”

Dale Earnhardt Jr.: “I feel good about it. It was a good safe call. The race ended per the rules, and I’m totally OK with that.”

Kevin Harvick: “I didn’t cause the first wreck. I definitely don’t believe that I caused the second wreck either”.

Reading all these quotes back-to-back makes no sense, but bear with me.

If I were to tell you that Logano won his third straight race, Earnhardt Jr. missed advancing to the next round by one position, there were two restarts but only one attempt at a restart to end the race and the defending champion caused some controversy to end the race, what would you say?

Probably something along the lines of what NASCAR fans everywhere, including myself and even the drivers were thinking: Ummmm. What. Just. Happened?

I don’t think anybody really knows. But I’m going to try to recap this 500 mile, 188 lap race that eliminated four drivers from championship contention in this article to the best of my ability, so, let’s get started …. with the ending.

Jamie McMurray’s engine expired with only five laps remaining, bringing out only the second caution of the afternoon (green flag stretch of 100+ laps to start the race was the longest of the season), and setting up a restart. However, before this weekend, NASCAR announced that they would only run one green/white/checkered restart instead of the usual three, due to safety concerns and the amount of carnage that is usually created. So that’s what they did.

So the race was over, right? Think again.

NASCAR never threw the green flag, despite their own rule that states that the leader starts the race. Race control, manned by David Hoots, deemed that the “attempt” at the GWC restart wasn’t actually an “attempt”, so they lined back up, and they tried it again.

Remember: Earnhardt Jr., the current king of Talladega, the sport’s most popular driver, is running second at this point, and needs to win to advance to the next round of the Chase for the NASCAR Sprint Cup. He led 61 laps and overcame adversity that was thrown at him (was penalized for his pit crew being over the wall too soon, served a pass-through and got way behind), but rebounded to be in a position to win, advance and knock Kevin Harvick out of the Chase.

How about we throw in another variable to this mess. The defending champion, Harvick, found out that he had a major problem with his car: it flat out wouldn’t go. Simple as that. He radioed to his team prior to the first “attempt” that was not really an “attempt” at the GWC that something was seriously wrong with his car.

“Guys, I don’t think you understand. I mean, I’m wide open right now,” he said as he ran about 50 MPH (pace car speed) down the backstretch of the 2.66 mile tri-oval.

The champ was in trouble, and he knew it.

The first “attempt”, Harvick moved out of the racing line because he knew he was going to get run over if he didn’t due to his engine problems. Luckily for him, the “attempt” was deemed not an official “attempt”, as it has been well-documented.

While the field was running around under caution, there was chatter between the No. 4 team on the radio. Long story short, crew chief Rodney Childers told Harvick his situation in points, and that if he were to drop back in the field (would have been around 30th), he would be out of the Chase.

Now to the second “attempt” that ended the race. Harvick opted to stay in line this time (noticeably different) and “block as many positions” as he could, as Childers told him on the radio, trying to, essentially, save his season. As Trevor Bayne tried to get to Harvick’s outside, the No. 6 was clipped by the No. 4, triggering a multi-car accident that froze the field at the time NASCAR displayed the caution flag. When the caution flag was displayed, Logano was a nose in front of the No. 88 car and was awarded the win. Harvick was scored 15th, and was three points ahead of ninth place, and punched his ticket to the next round.

Does that make sense? Yeah, I didn’t really think so, either.

Hamlin’s day wasn’t too smooth. His roof hatch (an optional part that teams/drivers decide to put on the car in case of an emergency so the driver can get out) came loose and was flapping on the roof of his car. The No. 11 car came to pit road to try and fix it, but it was after two stops (lost three laps, and the draft, in the process) when Hamlin’s hatch was 100 percent fixed. He got caught up in the final crash, as well as Kenseth, and the JGR teammates finished 37th and 26th, respectively, ending their hopes at a championship and an all-Joe Gibbs Racing final four, like many predicted.

I know, the ending of this race was beyond hectic, confusing, disappointing, spectacular, whatever adjective you want to put on it. But I’ll tell you one thing that everybody can agree on: Talladega lived up to they hype. Everybody always points to Talladega as the one track and the one race that will change it all, and although it didn’t do quite that, it almost did, and he created some pretty intriguing storylines for people like myself, and people around watercoolers everywhere, to talk about.

Be on the lookout for a podcast later this week, as well as another article, recapping this craziness and my take on it all, as well as the Challenger round, and looking ahead to the Eliminator Round, which begins next weekend at Martinsville Speedway on Sunday afternoon at 1 p.m. (NBCSN, pre-race begins at 11:30 a.m.).