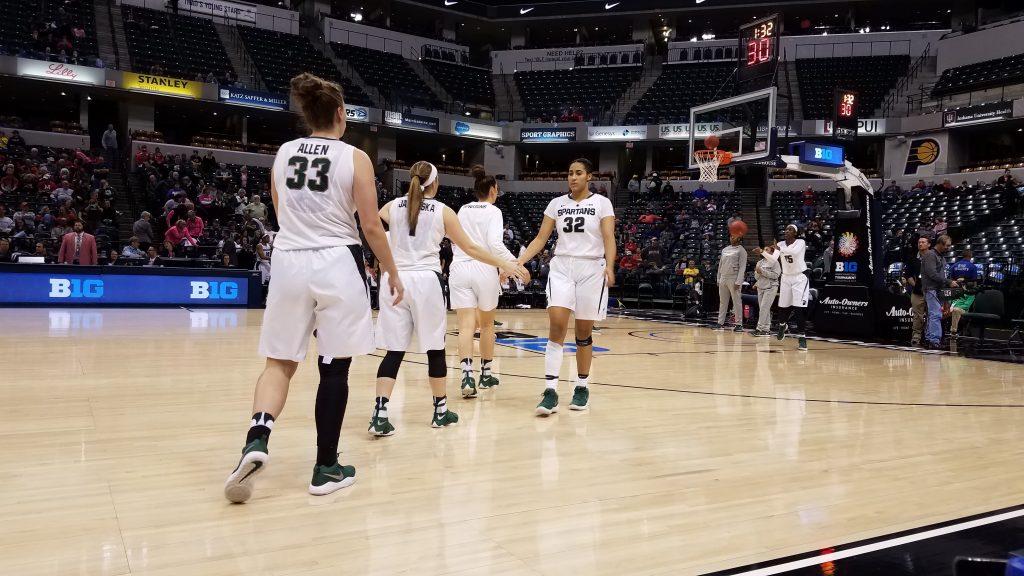 INDIANAPOLIS, Ind. — Despite big games from Tori Jankoska and Branndais Agee, Michigan State (21-11 overall, 9-7 B1G) was unable to overcome 93 points from Maryland’s starters, falling by a final score of 100-89 at Bankers Life Fieldhouse on Saturday night.

“Give Maryland a lot of credit,” Spartan coach Suzy Merchant said. “I thought they played with great toughness and energy. Their size and their strength is usually what gets people in the paint. We tried some different things, and we did the first time we played them. And it did open some things, but I thought, you know, we kept cutting it. We just couldn’t get over the hump.”

Jankoska and Agee led the Spartans combining for 55 points, six rebounds and six assists. MSU played well enough offensively to win, finishing the game shooting 53 percent from the field, 41 percent from beyond the arc and 90 from the free-throw line, but the defense wasn’t there.

“We’re a good 3-point shooting team, I think, one of the best since I’ve been here,” MSU senior guard Tori Jankoska said. “And when you’re scoring three’s and their hitting two’s, it helps you get back in the game.”

The Terrapins (29-2 overall, 15-1 B1G) were led by their lone seniors Brionna Jones and Shatori Walker-Kimbrough. Jones scored 32 points, grabbed nine rebounds (six offensive) and dished out six assists while shooting 12-of-14 from the field.

Not to be outdone by Jones, Walker-Kimbrough poured in 22 points, grabbed five rebounds and dished out four assists of her own. The 5-foot-11 guard was unstoppable in the first half, scoring 17 points on 6-of-9 shooting from the field.

“Coach (Brenda Frese) said it was important for us to keep pushing tempo, especially with them coming off I think it was day three or four for them,” Walker-Kimbrough said.

“They have players that can score from all angles. You try and double one person and you leave another McDonald’s All-American wide open,” Jankoska said. So it’s tough. But there’s some times where we just didn’t get rebounds, defensive rebounds, when we needed them, and those are hard to guard.”

With the loss, the Spartans will wait to hear their seed in the NCAA Tournament, which will be announced on March 13 at 7 p.m. on ESPN. According to ESPN Bracketology, the Spartans are a No. 9 seed in the Bridgeport Region.