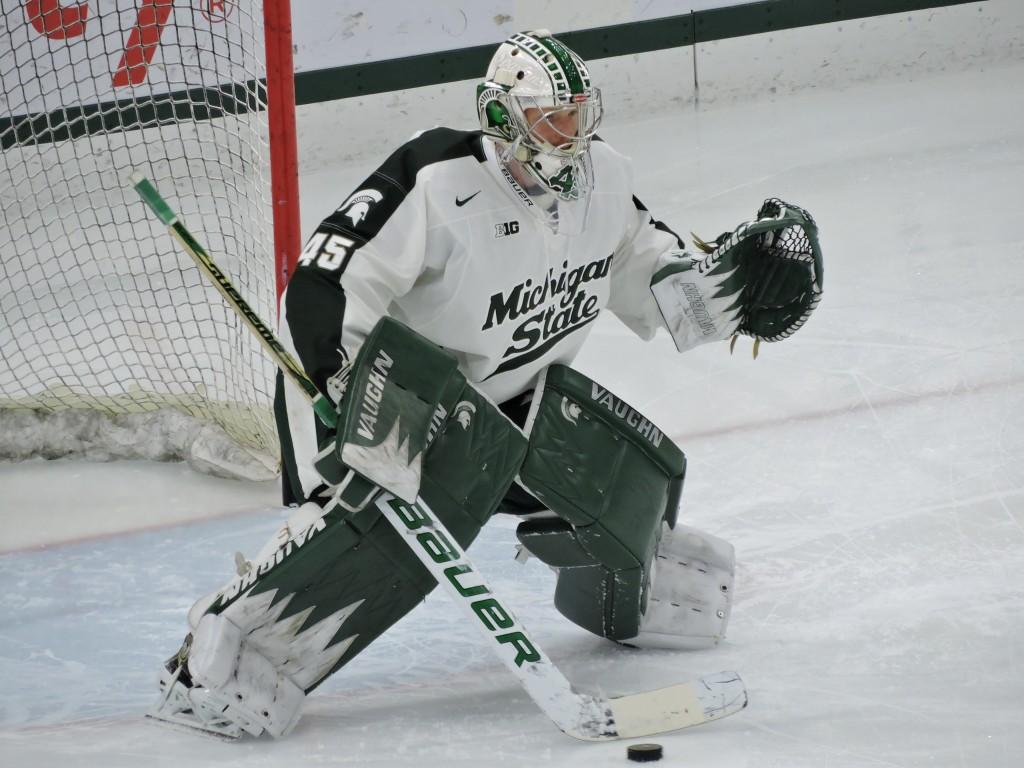 Maybe it was the two weeks off, or maybe it was the two first career goals from the freshmen. Whatever it was, it worked because Michigan State dominated the University of New Hampshire in a 5-0 victory Friday night at Munn Arena.

The Spartans came out playing inspired hockey in the first 20 minutes of play and were able to take advantage of the out of sync Wildcats just 6:12 into the game. Mason Appleton took a backhanded pass from Michael Ferrantino behind the net and tucked it in for his first career goal.

“Ferrantino did all the work,” Appleton said. “I had a wide open net and all I had to do was put it in.”

“I told him to say that, ”Ferrantino joked  from the next locker over.

Jake Hildebrand and the Spartan defense were able to shut down a team that is known for their speed as well as their ability to score goals. Two of the nation’s top three scorers, Andrew Poturalski and Tyler Kelleher, didn’t register a single shot between them in the first period. The prolific duo combined for four shots in the game and failed to score.. As for the rest of the Wildcats, 25 total shots came Hildebrand’s way and he turned aside every one of them.

“I thought we played great team defense tonight,” Hildebrand said. “They’re really skilled and they like to play a fast game of transition. I thought we did a great job controlling the puck and limiting their chances.”

It was a total team effort, and head coach Tom Anastos keyed in on that after the game.

“They can move the puck and they have good speed. They got some guys that are really nifty and I thought we defended pretty darn well,” Anastos said. “Our defense did a good job containing them. Our forwards did a good job transitioning back and forcing them to make plays under pressure. When we did break down and gave up a good attempt, Hildy stood tall.”

The Spartan defense never let the Wildcats generate any kind of attack, which was a big reason they registered a low shot total and no goals. Whenever a Wildcat forward would cross the blue line there was a Spartan there to lift the stick and take it away, and as a result UNH was unable to maintain any kind of a forecheck.

Second verse, same as the first. The Spartan offense continued their relentless attack, putting up 14 shots in the period. The most important of them all came toward the end of the second, as Villiam Haag took a nice pass from Ferrantino behind the net and placed the puck perfectly in the top-left corner to put the Spartans up 2-0.

Haag is a player that Anastos believes can score some goals and raise the team’s goals per game average. But for whatever reason, things haven’t been going his way as of late. Tonight he was finally able to break his scoreless streak and hopefully get things going in the right direction

“I know I do some good stuff once in awhile but maybe it doesn’t go well,” Haag said. “It was a big release and I’m very excited for that.”

There was one point in the second period where the Wildcats began to show signs of life.  Ten minutes and 57 seconds in, defenseman Carson Gatt took a penalty for interference. During the ensuing power play, Hildebrand faced plenty of quality shots but none found the goal.

One of the best chances for UNH to get back into the game came when Kelleher found himself on a break away. However, Hildebrand made it look easy as he stopped the backhand attempt.

The Spartans really began to pour it  on in the third period as  Anastos saw his team put three more goals past Wildcat netminder Danny Tirone.

The first came from JT Stenglein just 3:35 into the third. Stenglein out-waited Tirone and was able to backhand the puck in for his fourth goal of the season.

Joe Cox took his turn to put one past Tirone as the Spartans were short-handed with 13:19 to play in the third. Cody Milan followed that up with a goal off of a beautiful toe drag past a UNH defender, netting his first goal of the season and first as a Spartan.

Tonight’s game was a great look into what the Spartans can do offensively. They have plenty of talent, with both upper and lowerclassmen who can score goals. It seems as though they have finally begun to find their groove.

“I told you coming into the season I like this group,” Anastos said. “Like any team you have to come together and you have to gain confidence. I thought it would take time to do that and given the injuries that we’ve had to deal with it’s probably been a little more challenging. I don’t think we’re there yet but you can see we’re making progress.

The Spartans and Wildcats are back at it Saturday night. Puck drop is scheduled for 7:05 p.m.