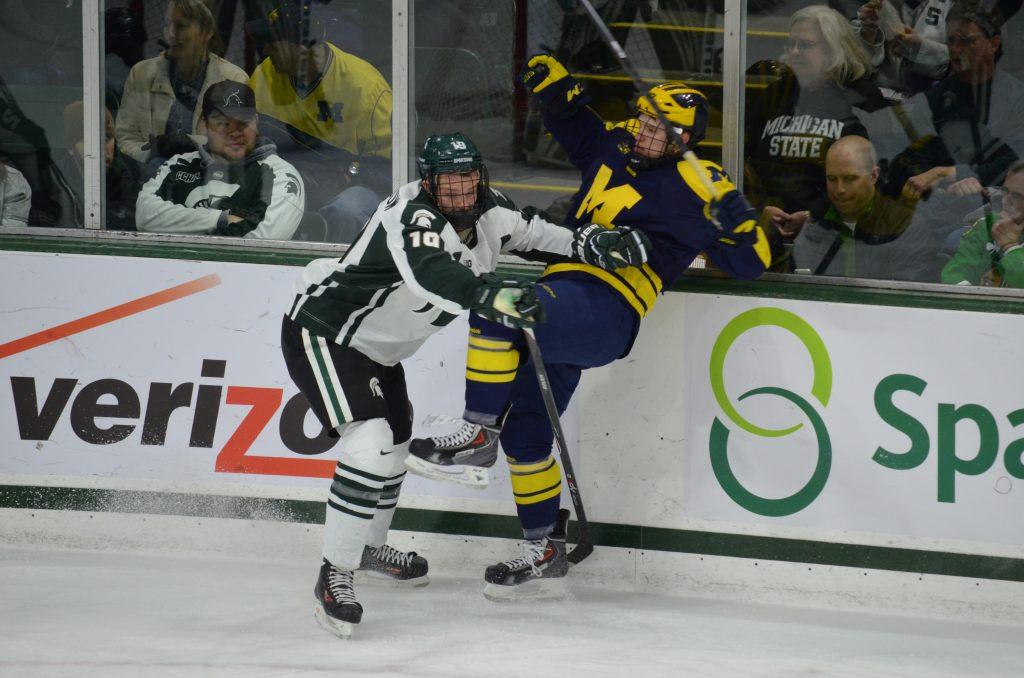 It’s Rivalry Week! Michigan State prepares to face off with in-state rival Michigan this weekend in college hockey’s most played rivalry. This is your weekend hockey preview.
Where:

The Rundown
Arguably every team in the Big Ten has improved in some way over last year, except Michigan. The loss of, Kyle Connor, JT Compher, Tyler Motte and others to graduation and the NHL have hampered the Wolverines offensively.  Like Michigan State, Michigan has a freshmen laden roster, and their youth and inexperience has shown this season as the Wolverines have fallen to fifth place in the conference after getting unceremoniously swept by No. 7 Minnesota last weekend. Needless to say, Michigan has not been playing up to their high standards as of late.

Michigan State, meanwhile, has been caught in a losing streak that dates back November 2016. Despite playing 50 minutes of solid hockey last Saturday against Penn State, the Spartans were unable to earn a victory and remain winless in conference play. Consistency has been the primary problem for coach Tom Anastos, as no single deficiency has been the source of the Spartans’ woes. Outside pressure is starting to build as the losses keep mounting, so it is imperative that the Spartans play with a bit of desperation this weekend against their arch-rival.

Players to Watch
For Michigan, keep an eye on freshman Will Lockwood. He is tied with the team lead in total points and has been a major contributor this year. It would also be prudent to keep an eye on whomever Michigan coach Red Berenson puts in goal for the Friday game. Michigan has been playing a carousel of goaltenders this year, though it seems that lately Berenson has decided to rotate between freshman Hayden Lavigne and senior Zach Nagelvoort.

For Michigan State, freshman Taro Hirose had a strong performance last weekend against Penn State with a goal and two assists on the weekend. He is tied with sophomore Mason Appleton in assists and had been on a hot streak so far so look for him to have an impact this weekend.

Prediction
Michigan State has not won a home game against the Wolverines since March 8, 2014. It is imperative that Michigan State not only win this weekend but win at home. The Spartans will be playing with desperation as they try to snap their nine game losing streak and pick up their first conference win. I predict that Michigan will win Friday night’s game at Yost by a close margin, but the Spartans will regroup and emerge victorious in East Lansing on Saturday.