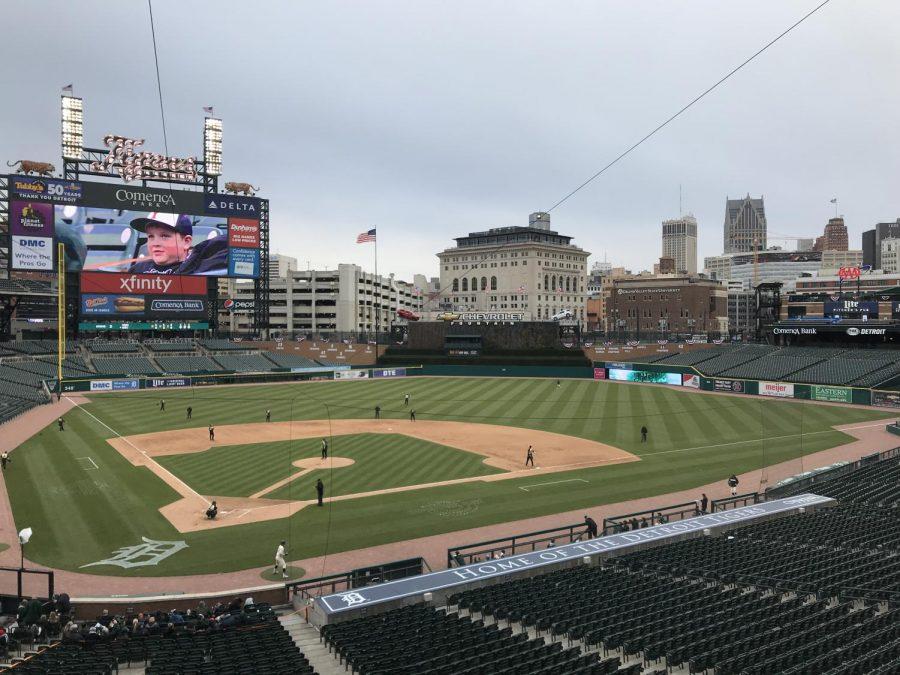 DETROIT – For the second time in the past six days, the Spartans and Western Michigan Broncos met on the baseball diamond, this time at the confines of Comerica Park for the annual ‘Clash at Comerica’ game in the Motor City. Just like the last Wednesday’s result, MSU emerged with a win, this time by a score of 5-2.

“It’s a lot of fun,” coach Jake Boss Jr. said when asked about playing at Comerica Park. “It’s an unbelievable experience here, one that our guys will be able to tell their kids one day.”

The Spartans used a fast start on offense to fuel their victory at the home of the Detroit Tigers, with a three-run first inning proving to be the difference on a chilly night. Marty Bechina, who delivered a game-winning sacrifice fly in the last meeting, doubled in Bryce Kelley and Bailey Peterson to get the scoring started.

Royce Ando would plate the third run of the inning with a sacrifice fly to score Bechina, as the Spartans did all their first-inning scoring just five batters into the contest. The hot start broke Michigan State out of an offensive slump, as the team combined for just five runs in the previous Michigan series.

“You always want to score first so you can get some momentum,” Boss said. “We gave up the momentum in the second inning, but the bullpen made some big pitches when they needed to, and we made some plays defensively when we needed to.”

Jarret Olson got the start for the Spartans, only throwing 1.2 innings while allowing one run and four walks. But just like the first meeting between these two teams, Caleb Sleeman entered the contest after a short start and stopped the bleeding. After throwing 3.2 scoreless innings on Wednesday, the redshirt junior gave his team another scoreless three innings and four strikeouts.

It was an overall positive outing for the bullpen as a whole, with the unit of Sleeman, Evan Flohr, Colten Panaranto and Indigo Diaz combining for 7.1 innings of one-run ball. This outing continued a trend of success for the relievers, as they compiled 31 strikeouts in 26.2 innings over the previous seven games coming into Tuesday.

Michigan State would add two insurance runs in the bottom of the eighth inning, as a poor throw to first after a Kelley bunt allowed Zach Iverson to score and a Bechina single plated Iverson. The added runs brought the Spartans’ single-game run total to its highest mark since Mar. 15, when the team plated six against UConn.

The Spartans only allowed four hits on the night, easily achieving a new season record after giving up seven hits in three separate games entering the game. Two of those hits for the Broncos came from star center fielder Blake Dunn, who entered the game with a .394 batting average, good for second in the MAC and 44th in the nation.

Western Michigan did have its fair share of opportunities though, as the team left 11 runners on base after drawing 10 walks from the Spartans’ pitching staff. The Broncos entered the game hitting .296 as a team, one of the best hitting marks in the MAC.

The win for the Spartans moves their record to 8-2 at Comerica Park in 10 editions of the annual spring classic. Michigan State has now won 12 of its last 14 games against the Broncos, sweeping them in two matchups during the 2019 season.

Bechina led the Spartans hitting attack, going 2-for-4 and knocking in three of his team’s five runs. Kelley acted as the Spartans’ catalyst, going 3-for-4 with two runs scored in the leadoff spot. Sleeman picked up the win while Diaz recorded the save.

“Marty (Bechina) is the leader of this ballclub,” Boss said. “He led the way for us today, he came up big with some great at-bats and took what he was given.”

Michigan State will next take the field Wednesday against the Central Michigan Chippewas, wrapping up a five-game stretch against in-state opponents. This matchup was supposed to open the home schedule on Mar. 20, but was delayed due to rain.