Turk: After MSU’s heroics, why not this team? 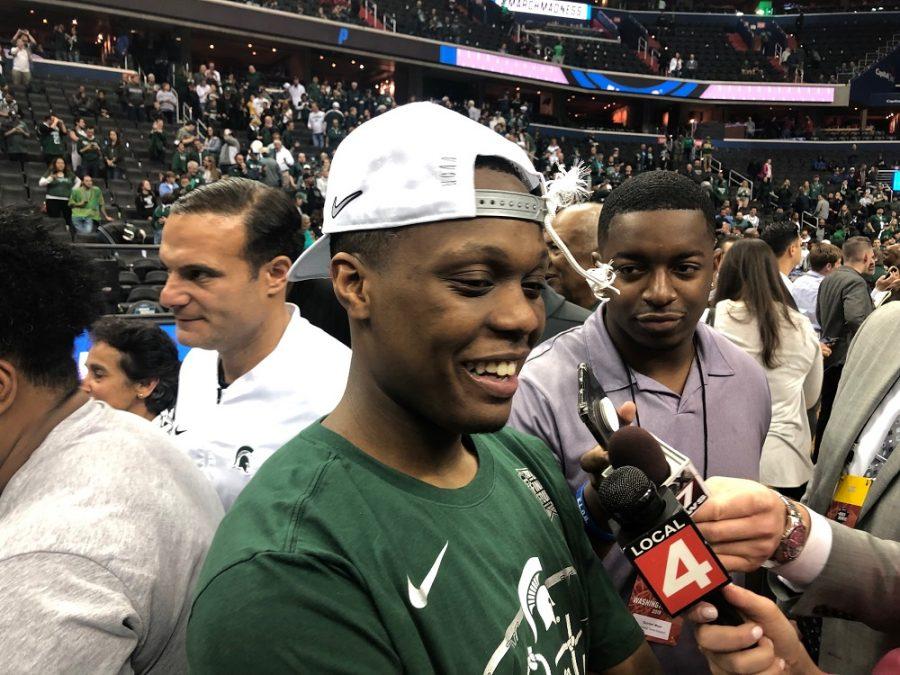 Kenny Goins was 3-of-11 from the field as the clock ticked past 7 p.m. on Sunday night, mired in a shooting slump from outside. 0-of-4 against Michigan, 0-of-7 against Bradley. With Michigan State trailing by a point to Duke, 35 seconds left, a 3-pointer over Zion Williamson.

Of course it was.

Goins hit it, of course, because now anything is possible with this MSU team. Perhaps Tom Izzo will walk across the Red Cedar River Tuesday afternoon instead of attending his weekly press conference. All on the table now.

“I can’t tell you how many times in those huddles they didn’t quit,” Izzo said. “They didn’t give in. We might not be as physically as tough as some teams I’ve had, but I think mentally we might be tougher than any team I’ve had.”

Toughness, experience, talent. MSU didn’t just keep up with Duke, they threw punches. None bigger than Goins’ shot to win it.

The play wasn’t even set to go to Goins, either.

“That [shot] was just the initial read,” Cassius Winston said. “I was going to set a back screen for X[avier Tillman], try and get an easy layup. They backed off of him, he stepped up and knocked it down.”

Williamson did his usual things, but MSU was there defensively now and then. He made half his shots against UCF, when he was being guarded by a 7-foot-6 Tacko Fall, but you have to stretch back to Texas Tech – MSU’s next opponent – on Dec. 20 for the last time he was held to making just 50 percent of his shots.

Tillman was the reason for that. He gave up 40 pounds to Williamson, but forced missed shots where the Duke freshman would normally power the ball in. He was complimentary of Tillman and MSU’s defensive effort following the game.

“He played great, solid defense,” Williamson said. “What they did, when I’d catch it on the post, they would bring two or three defenders so that I couldn’t spin. It was great defense.”

Matt McQuaid made some athletic plays when needed, a transition dunk in the first half and a big-time layup with 8:15 left that kept MSU out in front of a back-and-forth second half. Winston kept a cool head despite taking 23 shots to score 20 points.

“We maybe were a smarter team tonight,” Winston said. “We executed our game plan in the best way…It was a battle the whole night. At the end we made some winning plays. That’s what it’s all about at this point of the year.”

The upshot is simple now. Texas Tech has a defense that just locked down Gonzaga, a team with plenty of weapons. Izzo will have more experience at this stage than Chris Beard, his opposite number, but either Virginia or Auburn awaits in a hypothetical championship game. The Duke team they just beat has been the best in college basketball all year, but after knocking them off, it’s not hard to see a path to a national title. Now, after beating that team, anything’s possible.

Through the injuries and the tight losses and all of it. A chance for more.