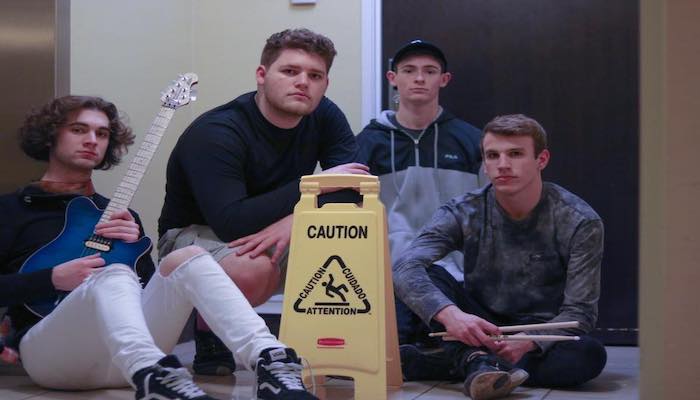 Let me set the scene for you all real quick. Mac’s Bar. A Thursday night in February. It’s close to 9:00 – well past my bedtime. I’m sipping on a cold brew of water and pretending that I’m 21 and ordered the IPA on tap.

Four spritely young gentlemen vault onto the stage of Mac’s Bar. A crowd, mixed of bar patrons, groupies, and other musicians, surrounds the stage in anticipation. A hush begins to fall over the bar.

The lights dim to a hue of blue. The electric guitar rips. Cymbals begin to splash. The band’s lead singer, Chaseton, steps forward to the microphone. “[What’s up, East Lansing! We are Anonymous Phone Call!],” he says – or at least that’s how he does in this article. Drumsticks click in the background. The band springs to life. Chase jumps into the crowd and immediately begins a moshpit as his bandmates lead a tongue-in-cheek metal cover of the Undertale-song-turned-meme-anthem, “Megalovania.” And for the next hour, the band never let up on maintaining an exciting and engaging performance that kept the audience packed.

This was my first experience with Anonymous Phone Call. And MAN, are they a cool group. Let me tell you – I’ve seen some cool groups perform live. I saw Stevie Wonder live one time. Granted, I was more worried that he was gonna fall every time he stood up – and every time he moved in general – but it was still Stevie Wonder. And I think Anonymous Phone Call was one of the best bands I’ve seen live.

But who cares! What do I know? You’re probably thinking, “Wow George, I’m glad you had fun at a live experience that you can’t recreate through the power of amateur journalism. How do you expect us to trust your taste in music – let alone your integrity?” Well, I came prepared! Anonymous Phone Call released their first studio album, “The Wait,”  in January 2018. You can take a slice of APC with you wherever and whenever!

Today’s Jam of the Day is called “Your World” – the bombastic and emotionally nostalgic closer to the album. “Your World” channels all of the feelings one would get from unrequited love. Unfulfilled promises and regrets that are  reflected back into the medley: a high-strung harmonic fusion of off-kilter chords. Yet the song walks a fine line between triumphant and grief all the same.

There’s an interesting dichotomy at play. The inflection in Chaseton’s vocal performance, the progression of the guitars – they both share a sensitive and pitch that emulates catharcism, whereas the bass and the lyrics themselves maintain the grounded cold reality of “Your World’s” bittersweet narrative. It continues to build throughout the song until reaching its climax in the epic breakdown, where I personally feel like I’ve been transported to the climax of a 1990’s action movie. It’s badass. For a song that croons about beautiful mistakes, “Your World” – and The Wait as a whole – is anything but.

“The Wait” is streaming now on multiple platforms. For more on Anonymous Phone Call – and to stay in the loop regarding their upcoming second album – check out their website, Facebook and other social media pages @apcbandmi.