Waters and Winston focused on team, not themselves ahead of Sweet 16 showdown

The pair of point guards were quick to dismiss attention to individual matchup on Friday. 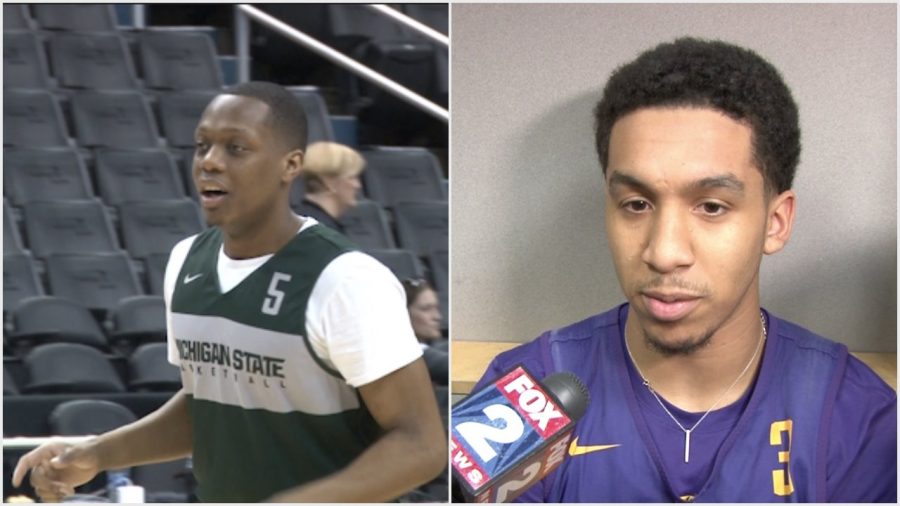 WASHINGTON, D.C. — Cassius Winston and Tremont Waters’ numbers may be similar and both may be the lead guards for their teams. But very little about the pair is the same.

Waters averaged 17.7 points per game in SEC play, Winston scored 19.6 in Big Ten action. Both averaged more than five assists a game on the year and served as the extension of their coach on the floor.

“Waters is a little more disruptive on defense,” said Tom Izzo after open practice. “I think Cassius is — his ability to shoot the ball from outside with consistency is a little better”

The matchup so often talked about may be big on paper, to the media and fans. If you ask them, it may not be as huge a deal in the eyes of Winston and Waters.

“It’s a team sport, obviously,” said Waters ahead of Friday’s game. “I don’t necessarily get into matchups and everything that goes into that. That’s for everyone else to pretty much evaluate. I go in knowing I have to run my team. It’s about myself and my teammates and the coaching staff.”

Winston, grew up in Detroit where he attended Univ. of Detroit-Jesuit H.S. Waters, grew up in New Haven, Connecticut – nearly 700 miles from Detroit playing at Notre Dame H.S.

Winston echoed much of what Waters said.

“I’ve seen him a lot at AAU and I’ve been watching him this year.I don’t get into individual battles, you know?,” said Winston. “We both do a lot for our teams. And if we’re playing our best then usually our team is playing their best, too. So the victory in itself is just winning the game.”

One reporter asked Winston if he ever even faced Waters on the AAU circuit in high school.

“Not that I remember,” responded Winston.

The praise the two gave each other is still there.

“Obviously he’s a great player. It’s gonna be fun playing against him,” said Waters prior to open practice. “He controls the offense. He runs the team, and pretty much everything pretty much runs through him.”

Two great players acknowledging one another’s game is not in any way taking the matchup personally. More so a proverbial knod of the head, showing a mutual respect of success and talent when they see it.

“He does a good job of using his quickness, changing speeds and things like that to get to his spot,” said Winston. “He does a great job controlling that team, pushing tempo, doing a lot of good things for that team.”

“Means nothing,” said Waters. “That’s my coach comparing him to Kemba Walker.”

A boring response to something so many are talking about.

The attention to such a matchup isn’t unwarranted with both being as talented as they are. But the game tomorrow will be determined by more than two players.

“It won’t be where, I think, it will be Cassius against him or Waters against Winston,” said MSU coach Tom Izzo. “It’s still going to be a team. It’s five guys. We’re not guarding any one of their guys with one person.”

In March, your success is defined by more than one player. Teams making it to the Sweet 16 are often the product of five players coming into one.