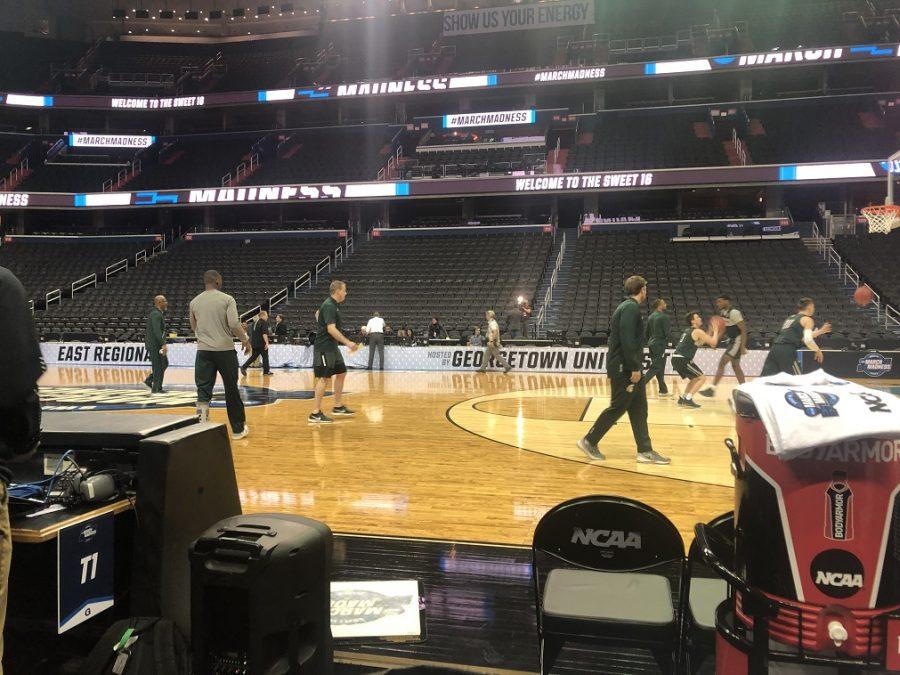 WASHINGTON, D.C. — When the nation turns its focus to Capital One Arena on Friday night, it will be to two of the best point guards of the nation.

It’s only fitting that the two meet in the Sweet 16. Michigan State’s Cassius Winston and LSU’s Tremont Waters have been the focal points of their teams all season, and their matchup on Friday will be the center of attention.

If MSU is to play their much-hyped matchup with Duke, as seeding would suggest, they’ll have to beat a team that lost just twice in the SEC regular season in LSU. The Tigers beat Yale and Maryland last weekend in Jacksonville, Fla. to move to their first Sweet 16 since 2006.

“They go almost violently to the offensive boards,” said MSU head coach Tom Izzo. “[They’ve] done an incredible job with that. Once in a while the missed shot becomes the best offense, and that’s near and dear to my heart. I’ve been very impressed watching them on film.”

The Tigers are also without head coach Will Wade, who was suspended by the team four games ago after refusing to answer school officials’ questions on his involvement in an FBI wiretap. Wade led LSU to a 25-5 record but faces potential witness questioning on April 22.
LSU
Waters is the primary playmaker. The sophomore considered the NBA Draft last season before returning to Baton Rouge and has flourished, averaging 15 points a game and earning the title of co-SEC Defensive Player of the Year. His quickness and shot-making ability will test Winston’s defensive mettle as well as any point guards have this year.

“Waters is a heck of a player,” Izzo said. “He’s jet-quick. Waters is a little more disruptive on defense. I think Cassius’s ability to shoot the ball from outside with consistency is a little better.”

The only other starters to average double-digit scoring are junior guard Skylar Mays and freshman center Naz Reid. Mays is a similar type of scorer and slasher to Waters, as neither player is known as an outside shooter. Reid is a solid athlete, and at 6-foot-10 presents problems for MSU’s Xavier Tillman inside. Freshman Javonte Smart averages 11.4 points a game off the bench.

MSU will have to contend with Reid and senior forward Kavell Bigby-Williams inside, as the 6-foot-11 London, England native adds 7.8 points and 6.7 rebounds a game. Both big men check in at 250 pounds, and with that much size inside it may be tough for the smaller Kenny Goins against one of the two. Nick Ward played 20 minutes for MSU against Minnesota last Saturday – this game may see a similar amount of time for the junior.

The pair are a major force on the offensive glass, an area MSU has struggled mightily with at times this year. The Spartans let up seven offensive boards to Minnesota last Saturday, but haven’t allowed double-digits in offensive boards since giving up 10 to Wisconsin in the Big Ten semifinal.

“They’re huge down low,” Ward said. “That’s going to be a challenge for us. We’ll have to box out, rebound, stick to the game plan. We’re going to have our hands full.”
Michigan State
The Spartans head into Friday as rested as they’ve been in weeks, with six days between Minnesota and tip-off tomorrow. Winston has gone up against a better defensive guard in Michigan’s Zavier Simpson and scored an average of 21.3 points in three games against one of the best perimeter defenders in the nation.

He may need to shoot from outside a touch better for MSU to be assured of victory, as Winston’s hit just seven of his last 29 3-point attempts stretching back to the Nebraska game at the start of the month. MSU as a team has been just below its season average in their last five games, making 38 percent of its 3s in that stretch. Finding ways to score on LSU may rest on Tillman and Ward finding ways to score over taller opponents and crash the offensive glass themselves.

Matt McQuaid and Kenny Goins will be tasked with stretching the Tigers defensively. Goins rediscovered his 3-point shooting form on Saturday, going 2-of-4 from outside the arc in scoring 9 points. His offensive presence may draw one of the big men out onto the perimeter, and his ball-screen shooting with Winston in the half-court may be a difference-maker for the Spartans.
How it’ll all play out
Both teams love playing in transition offensively and put an emphasis on rebounding. Winston is more of a playmaker and distributor for MSU on the run than Waters, who if given the opportunity will look to make a play at the basket himself with speed. In a game where LSU holds the athletic advantage, Aaron Henry will be tasked with playmaking off the dribble – the 9 points he had against Minnesota may need to be upped ever-so-slightly against the Tigers.

Both teams haven’t been completely consistent shooting the 3 in recent weeks. LSU went 7-of-24 from outside against Maryland and make just 32 percent of their attempts for the season. MSU will feel confident as one of the best 2-point defensive teams in the nation, but the size and speed of LSU is something the Spartans haven’t really seen too often this season.

The two are scheduled to tip off tomorrow night at 7:09 p.m., and MSU enters as 6-point favorites. The game will be televised nationally by CBS, and WDBM’s live call of the game from Joey Ellis and Kyle Turk will start around 6:53 p.m. on 88.9 FM in the Lansing area.