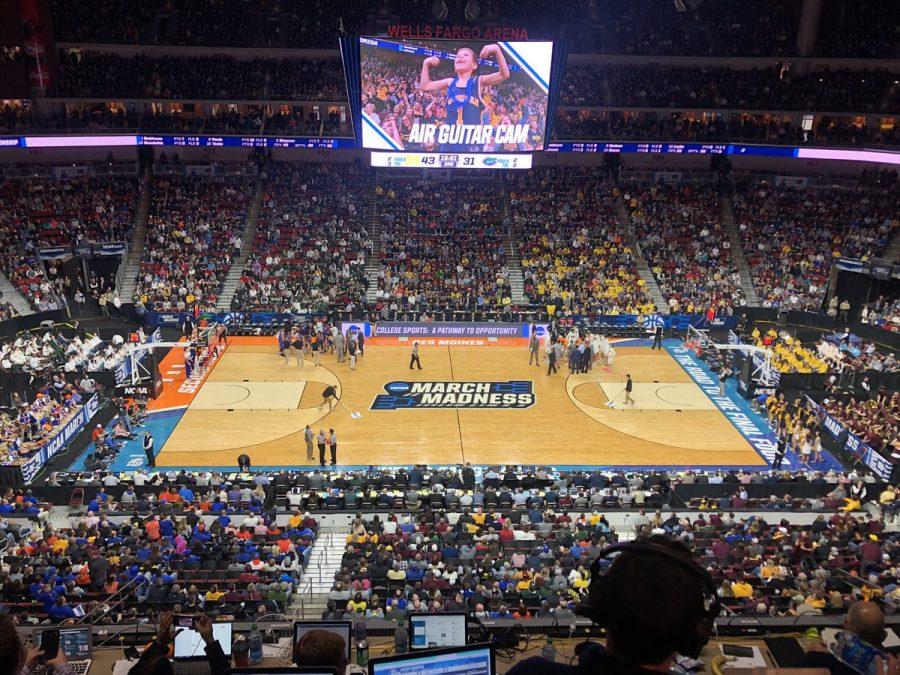 DES MOINES, Iowa — There was always going to be a little doubt, what with the whole last-three-years thing, right?

Michigan State decided to dispel any notion of further disappointment, starting with confidence and finishing with Cassius Winston on their way to a 70-50 victory over Minnesota on Saturday night.

It was mainly straightforward for Michigan State after they made 13 of their first 16 shots, as MSU started a game hot offensively for the first time in weeks. By the time Richard Pitino needed his second timeout of the first half, the Spartan lead was already 20 and the Spartans already had one foot in the nation’s capital next weekend.

Even with MSU committing 22 turnovers, they still controlled the game throughout, setting up a matchup with LSU in Friday’s Sweet 16. It’s the first time since 2015 that the Spartans have made it to the second weekend of the tournament.

“There were stretches where we were good and bad but a couple things happened today that were bizarre,” MSU head coach Tom Izzo said. “It was good to get Nick back in the fold here a little bit…to play that many games [five] in eight days when you are already beat up is hard.”

There was an obligatory second-half run for the Gophers. Minnesota went on an 8-0 run behind Coffey and freshman Gabe Kalscheur that pushed the heavily pro-Gopher crowd to peak volume.

A pair of mid-range jumpers with the shot clock running low fell. After taking a hard fall near the sideline, a steal and 3-pointer to push the lead back to 16.

Winston led the way for MSU with 13 points and 9 rebounds, the 7-0 run effectively killing the game. In a game where Minnesota’s Jordan Murphy played just four minutes with a back injury, Amir Coffey had to take over, scoring 25 points on 8-of-24 shooting to lead the game in scoring.

“It’s always good to be playing your best basketball at the end of the year,” Winston said. “We’ve been on a roll, we know what kind of team we are. We know what works for us.”

MSU was locked in defensively from the tip. After Daniel Oturu opened the scoring for Minnesota on the game’s opening possession, solid perimeter defense forced the Golden Gophers to miss their next six shots. In the meantime, Winston had MSU running early – consecutive assists for a Matt McQuaid dunk and a Kenny Goins layup forced Minnesota to call an early timeout down 11-2.

Coffey heated up for Minnesota out of the break, scoring U-M’s next seven points to cut the Spartan lead to five before Goins made his first 3-pointer of the game. With Jordan Murphy limited to just four minutes in the first half – and eventually the game – MSU pressed on.

Minnesota definitely presented a better matchup for MSU on both ends – Winston continued to flourish in transition. Xavier Tillman finished an alley-oop from Winston and then caught a Winston pass in transition and finished to push the lead to 13 with 8:30 left in the first half.

The teams traded misses to wind down the first half as Tillman and Ward remained active inside. They combined for 12 points in the opening 20 minutes while Goins led the way with 9, handing MSU a 33-19 lead at the break.

Tillman came out of the break rejuvenated, converting a layup and free throw to push the lead to 17, but turnovers remained a factor. The aforementioned Gopher run pushed the lead down to single digits before Winston stepped in.

Tillman finished with a team-high 14 points and 6 rebounds, playing just 22 minutes due to foul trouble.

“It’s an unbelievable feeling,” Tillman said. “I knew this was a team that’s filled with winners. The coaching staff, the culture at Michigan State is winning and to be a part of it just feels amazing.”

The closing eight or so minutes were elementary. Thomas Kithier saw his first extended minutes of the tournament, Nick Ward continued his return to form with a 9-point outing, and there was even a Marcus Bingham Jr. sighting. Winston and Izzo hugged after the Big Ten player of the year left the game with three minutes remaining. Don’t worry – Aaron Henry and Izzo were happy too.

With the Sweet 16 beckoning, MSU stepped to the plate and delivered. There’s more to be played.