We Play It for the Music | Mother 3 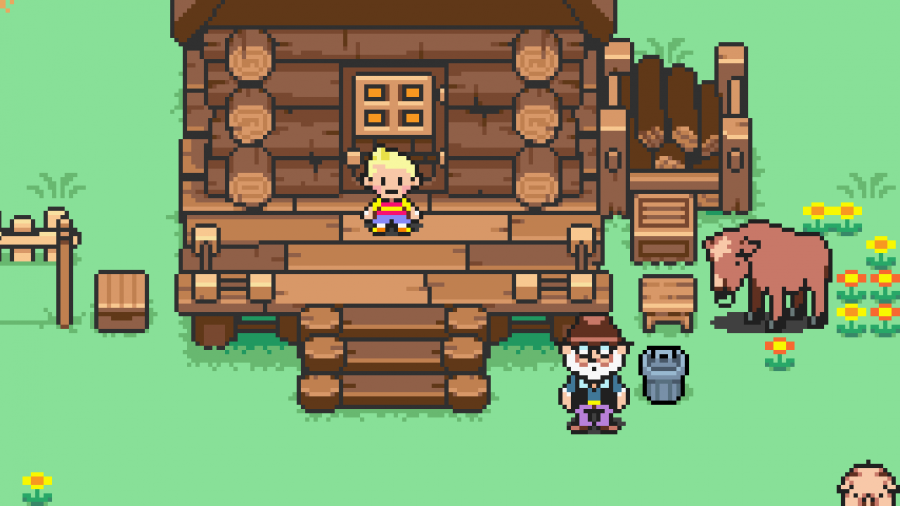 Man, if this isn’t going to be the most obscure thing you read today. I’m gonna talk about the extensive soundtrack for a Nintendo role-playing video game that was never released outside of its launch in Japan back in 2006. That’s right – I’m talking about Mother 3.

You might be thinking: “George, come on. It was okay when you wrote about that Evil Dead show, but what are you doing now? Writing about some game that’s old enough to be in middle school? And it never even got released in the U.S.? What’s the deal?”

These are valid questions. I think the soundtrack to this game is one of the best in any video game,  and it needs to be talked about more. I’m also a huge nerd with a poor social life, so this is a match made in heaven for me. With that being said: let’s take a look at what Mother 3 is about, and then dive into its sound. Strap in, kids. It’s going to be a bumpy ride.
The Plot
Mother 3 is the final entry in Nintendo’s EarthBound series. EarthBound, which is the Western name for Mother 2,  has always had a bit of a poor domestic relationship with the Western Hemisphere since its 1995 release in the United States. At the time, it sold poorly and was considered a commercial failure. However, by the turn of the century, a budding fan community, paired with the series’ representation in the popular Super Smash Bros. series, EarthBound retroactively became a must-have title for Nintendo fans, and is now called one of the best RPGs of all time.

After an extensive development cycle, a sequel to EarthBound was released in 2006 for the GameBoy Advance. Though they’ve acknowledged the game’s existence and its popularity, Nintendo has since failed to rerelease the game outside of Japan, leading to the development of a highly acclaimed fan translation, released in early 2008. This, in itself, is a testament to the game’s cult following — the reason it’s remained salient in today’s gaming culture is because of its fans. Momentum hasn’t slowed, either. Some fan brought a poster calling for the localization to E3 a few years back — and Adult Swim made a commercial block out of it.

The story revolves around a young boy, Lucas, his family, and his community as they battle an antagonistic political regime known as the Pigmask Army. Over the course of eight chapters, players navigate the Nowhere Islands as a variety of characters, each having unique abilities and character arcs. For example, you play as Lucas for a majority of the game, but there are certain segments where you play as his dad, his dog and a monkey, among others. The game is packed with themes and narrative devices, such as technology versus nature, the importance of family, capitalism, loss and sorrow, and coming of age. Mother 3 is probably the closest a game has ever come to being a Bildungsroman.

Gameplay consists primarily of traditional role-playing tropes: battling enemies, leveling up and interacting with non-player characters in a narrative-driven environment. In addition, the turn-based combat boasts a fighting system inherently synced with the music of the battle; as in, players may hit enemies up to 16 times in a row if they match the music’s cadence with their button presses. It’s a sweet mechanic, and arguably the game’s most unique characteristic. Timing hits and beats with the catchy tunes in the background is fun and rewarding.

To this end, the music in the game is pretty important for the purpose of the game mechanics and the narrative alike, and there’s a ton of variety to account for this. And man, did composer Shogo Sakai deliver! Spicy mambos, lively marches, somber ballads, callbacks to the 1960’s Batman theme and Bach, and more. There’s a lot to be experienced in the world of Mother 3 and its soundtrack. Though there are over 200 songs to listen to, the soundtrack has plenty of motifs and callbacks to earlier melodies, with nearly each one appearing in a different context later in the narrative.

It’s a versatile, creative and beautiful soundtrack. With that being said, here are some of my favorite songs/tracks.
The Music
Mom’s Hometown

This is one of the first tracks in the game and arguably one of the most memorable. We meet Lucas, his family, a family of Dragos (dinosaur-like pacifist creatures) and a feisty Mole Cricket. Immediately, the game sets its tone with a lot of heart and humorous dialogue that breaks the fourth wall. (“Lucas! Try to imagine a thing called a B button!” is a wonderful line that his grandfather candidly states). The music reflects this levity with a groove that compliments a warm acoustic rhythm and funky synth melody.

This is one of the most beautiful songs in the game, and it plays at some of the most somber moments I’ve experienced in gaming history. I don’t want to spoil it any further, but for this song alone, I would recommend experiencing this game in some capacity. Also, you can hear that the Love Theme is actually just a rearrangement of the melody from Mom’s Hometown.

Mind of a Thief (Duster’s Theme)

The drum beat makes me feel like I’m in a John Hughes movie, so I wanted to include this song for that reason alone. Coincidentally, Duster himself fits the mold of a Hughes character with his unique characteristics: he has bad breath, a disabled leg, and lives as a thief. According to Shigesato Itoi, the game’s creator, Duster’s characterization suits the overarching narrative perfectly. “The Mother 3 world is all about having friends like them. Perhaps you could call them symbols of not rejecting such people.”

For the game’s third chapter, you play as a monkey named Salsa. Salsa has been made an unwilling pawn of the Pigmask Army’s mission to infiltrate the Nowhere Islands as a manipulative sales monkey (it’s easier experienced than explained). The chapter is as much about Salsa’s plight as it is the transformation of the village because of the Pigmask’s influence. The song is just fun and perky — it’s a cute little monkey carrying boxes! The slave labor and political subterfuge are a little harder to pick out.

A Railway In Our Village!

I should note that the village starts out as a rural farming community with no concept of money, greed, or commercialization of any kind. After the Pigmasks arrive and introduce technology, the town square transforms into a robust modern suburb. There’s even a frog driving a car around! This is a remix of Mom’s Hometown, but tweaked to the point where it’s a little unfamiliar. Just like how the town is to Lucas and co.

I don’t remember this song in the actual game, honestly. But I really like it. It’s very pensive. It makes me think about where I’m going in life and what I’m hoping to accomplish. (And since I’m writing a lengthy article about random songs from a video game, there’s your indication of where my life is at).

Here’s the main march of the game’s central antagonist – the Pigmask Army, and their nefarious leader, Porky. It gets remixed multiple times throughout the game; you’ll hear it as a march, an 80s rock medley and a bossa nova! I LOVE the melody here. It’s very foreboding, and it gets in your head! Whether it’s from a spaceship whirring overhead, or in the army’s headquarters, or in an elevator lobby, this song has a cameo in every corner of Mother 3.

This song is the epitome of somberness. I think I write “epitome” in just about every article or paper I’ve ever written to make me sound smarter. Is it working?

In a memorable montage, all of the characters you’ve met in your story come out and thank you for spending time with them in the game. Literally. They thank YOU – the player. It’s such a special moment – and the perfect ending for such a wonderful and charming game.

Wow! Did you make it this far? Either you’re my mom and you’re just being supportive, or… well, actually, that’s the only scenario I can think of. In any case, I implore you to check out the entire soundtrack the next time you look for a studying soundtrack – I promise you that you won’t regret it.

If you’d like to experience Mother 3 in the Americas, consider reaching out to Nintendo via social media and make your voice heard.