We Watch it for the Music | Scott Pilgrim vs. the World 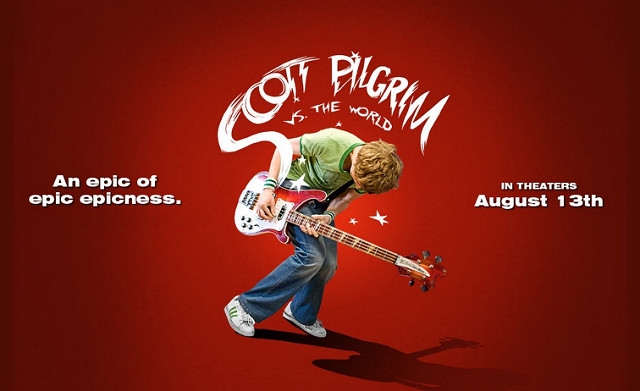 “We are Sex Bob-Omb, and we’re here to make you think about death and get sad and stuff!”

It’s lines like these that make “Scott Pilgrim vs. the World” a certified cult classic among many movie fans. This film, based on the comics by Bryan Lee O’Malley, is well known for its hilarious writing, constant video-game tributes and stylized action that makes it truly feel like the books it’s based on. However, one underappreciated yet equally important factor in this movie’s popularity is its incredible original music. Seeing as a large portion of the plot revolves around the titular character’s band, Sex Bob-Omb, and indie rock culture in general (the protagonist is even named after a Plumtree song), crafting the perfect soundtrack was necessary for nailing the tone. So who does one recruit to bring a band to life that  thousands of comic-enthusiasts have heard of, but no one has ever heard? The legendary, Grammy-award winning artist Beck of course.

Beck wrote and composed all of Sex Bob-Omb’s music throughout the movie and the actors provided their own voices. The heavy use of fuzzy distortion and raw production makes the band’s songs throughout the movie –  namely “Garbage Truck,” “Threshold” and an unnamed song performed during the title sequence – truly feel like watching your buddy’s garage band jam out in a local bar. But in the best way possible. Frontman Stephen Stills (played by Mark Webber) lends his yelpy voice and nonsensical lyrics to the mix to create a fictional band that feels entirely believable. The purposefully amateurish sound of Sex Bob-Omb perfectly suits their nervous yet charming underdog status as found in the comics.

While important plot points occur through song and one could claim that it is some sort of modern musical, “Scott Pilgrim” is primarily an action movie. Therefore, it’s highly fitting that director Edgar Wright chose to frame many of the film’s fight scenes with original music. The first of these musical fight-sequences takes viewers by surprise. Villain, Matthew Patel, hilariously stops mid-battle with Scott to sing a tune entitled “Slick,” accompanied by demon groupies no less. The absurdity of the song fits the surreal nature of the fight, as Patel hurls fireballs at his enemy.

The movie continues to heighten ridiculous scenes with even more ridiculous musical moments during Scott’s fight with the psychic vegan rockstar Todd Ingram. Scott challenges his foe to a bass guitar battle, and the two trade delicious riffs in an attempt to outshine the other as psychic energy surrounds them. This instrumental scene is enjoyable both musically as it is visually in the movie’s context.

One of the most impressive scenes is when Sex Bob-Omb is forced to perform at the same time as electronic duo The Katayanagi Twins in a battle of the bands. In a perfect matchup of songs and visuals, the twins’ keyboard summons two enormous dragons. Sex Bob-Omb’s performance of “Threshold” creates a massive yeti-like creature. It makes about as much sense as two bands performing at the same time does. As the bands’ songs become more intertwined, the beasts battle  synchronize with the energetic music. Once again, Beck and Wright are able to create a moment that works both as a thrilling cinematic event and a song that can be enjoyed on its own.

Action aside, Scott Pilgrim is also a comedy. Several of its songs exist purely for comedic effect. A band called Crash and the Boys is introduced as a Battle of the Bands contestant and proceeds to play two songs, hilariously titled “I Am So Sad, So Very, Very, Sad,” and “We Hate You Please Die” (both written and performed by Broken Social Scene). The songs themselves are each only a few seconds long. They consist of chaotic punk mayhem (the only lyrics in the former song are “SO SAD!”). But of course, in the spirit of comedy, both tracks are included on the official soundtrack. There is  only one disappointment in the soundtrack. The filmmakers excluded a third iconic Crash and the Boys song from the comics called “Last Song Kills the Audience.”

Another original song in this movie is introduced as a joke but later becomes something much more. The song in question is “Ramona”. A short acoustic tune that Scott sings to the story’s love interest in his apartment. Ramona quickly dismisses this awkward, poorly performed song in which the only lyrics are her name repeated over and over.

However the song returns as a beautiful, orchestral piece sung by Beck himself toward the end of the film. This gorgeous new version plays over the final scene and end credits, giving a peaceful sense of closure. “Ramona” is no longer a joke to the movie or the audience.

Despite the prominence of original music in the movie’s plot, “Scott Pilgrim” also makes use of some pre-existing music under Wright’s clever direction. During a concert scene, Academy-Award winning actress Brie Larson performs a cover of Black Sheep’s “Metric”. This cover fits right in with the movie’s stylistic leaning. Its tense tone underscores the moment when Scott realizes he has to fight a member of her band.

In addition, “Teenage Dream” by T. Rex hilariously plays over the scene where Scott breaks up with the 17-year-old Knives Chau. A very unique addition to the film score is the inclusion of music from The Legend of Zelda franchise. Emphasizing the movie’s video game-like style, the intro sequence is set to the opening theme from A Link to the Past. Later on, the Great Fairy Fountain theme which recurs in the Zelda games also appears in a dream sequence.

Although Wright’s relationship to movie soundtracks may always be tied to the excellent “Baby Driver,” in which nearly every scene is set to an iconic song from the last several decades, we should not overlook his work in selecting the music for “Scott Pilgrim vs. the World.” In this film where villains explode into coins when defeated and an army of stunt doubles is the most normal thing the hero fights, Wright and Beck managed to compile a set of songs that not only match the zaniness of the plot but serve to push the movie’s absurdity even further.

Each of the fictional bands from Bryan Lee O’Malley’s comics are brought to life in such a way that they feel real both in the film’s universe and in the real world where they can all be heard anytime. “Scott Pilgrim vs the World” was finally added to Netflix this fall. Even if comedy, romance and superpowered action aren’t your thing, you can most certainly always watch it for the music.