DJ Spotlight of the Week | Anahita 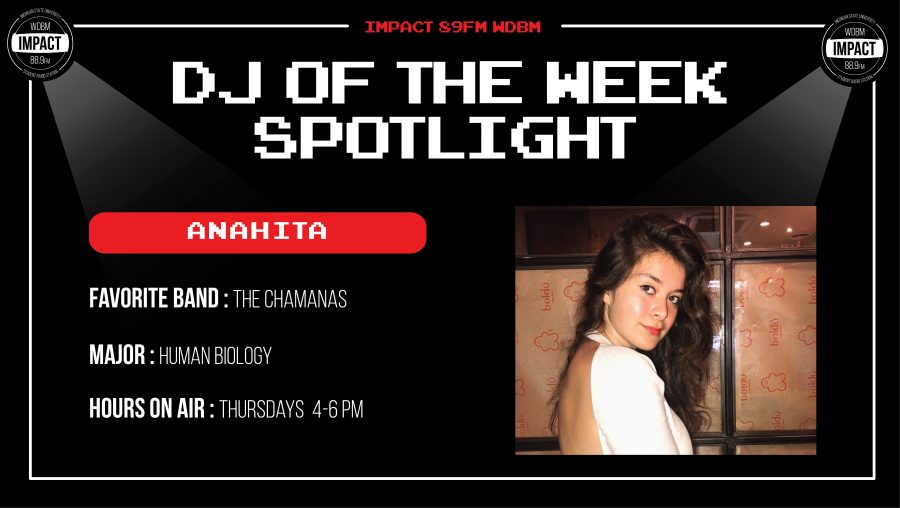 With the cold weather rolling in, warm up with our world traveling Anahita! When she’s not busy studying Human Biology, you can catch her with the MSU theatre. Every Thursday, 4-6pm DJ Anahita will keep you on your toes with wide music range from oldies like The Clash to modern Spanish music like Chamanas. This week we’re featuring Anahita Saifollahi for our DJ Spotlight of the week!

Zoe: Wow human bio, what do you want to pursue with that major?

Anahita: I’m not forsure, I did research last semester, and I got first place based on that in a forum. I was thinking about pre-med and there are a lot of options. I like biology so I ended up doing that, but I’m also very involved with the theatre program. I was considering switching majors, but I was already committed to Human Bio. They [theatre department] said I could still be involved so I still go to their performance and do a lot of stuff with them.

So how did you find out about the IMPACT? I was a freshman and I saw Impact’s tent at an event. I thought that radio sounded pretty cool, and I wanted to be a part of radio when I was in highschool and I was like “oh, here it is”.

What’s your favorite artist?I don’t have a specific favorite artist because I listen to so much music and discover new things on Spotify. But the majority of music I listen to is either Spanish or Persian. I’ve been listening to a lot of Spanish music currently. I listen to Chamanas a lot.

Z: Would you say that Spanish is your biggest musical influence?

A: No I think Persian is my biggest musical influence because I grew up with Persian music. I grew up in NYC but both of my parents are Iranian.

Who would be your dream co-host?

It has to be someone I click with and they’ve got to be funny. Some people would choose someone famous or popular to get more attention, but I wouldn’t because I don’t know them. Probably a really good friend of mine. But there’s this alternative singer Cuco. He’s so cool! I’d invite him.

If you could play an artist non-stop on the air, who would it be?

A: I think I would play the Clash.

Z: That’s not something I expected you to say!

A: I grew up with the music and played it a lot as teenager, I like their music.

Z: Is that influenced by your parents?

A: No I pretty much discovered that on my own. I was really into the 60’s-70’s England punk rock genre.

What’s the best concert experience you’ve had? I’ve been to quite a couple and I’ve always had strange experiences. I’ll be going to a Kali Uchis concert this weekend, so I want to say that one but it hasn’t happened yet. But the craziest one I think was back in 2008 at a Ke$ha concert and there was a mosh pit. It was a really small venue in Detroit and it was crazy! There was sweat, there was glitter- it was really intense. Another time, I was in LA a semester ago and there was a Lana Del Rey concert. I didn’t have tickets, but I found a way to get in. It was during her Lust for Life album, I think it was a Spotify session.

How did you find your way in? I was talking to some of the people in this massive crowd, and found out you had to sign up to get in invitation through Spotify, and you had to be a certain age- at the time I was not 21 I was 19 I think- and I just befriended some people who were like “oh you’re not 21? Well you’re just one person”. They were really nice. I’m still friends with them.

So going back you said, you were visiting LA, it seems like you travel a lot. What is your favorite place that you visited? I traveled a lot growing up, but a most recent experience was this summer I went to Spain. It was impulsive for me to go, I probably shouldn’t have went because of the price of the ticket. I went to Barcelona and some of the other cities. Out of all the places I’ve been in Barcelona is a beautiful city. I’ve never seen anything so alive.

Ok so now to a fun question that also isn’t music related: How would you survive on a deserted island?

A: I think of castaway when I think of that question. Would I have other people?

Z: Let’s say you do, what 3 things would you bring with you?

A: Definitely music, I want to bring people with me too, and probably a knife? It seems very useful for an island!