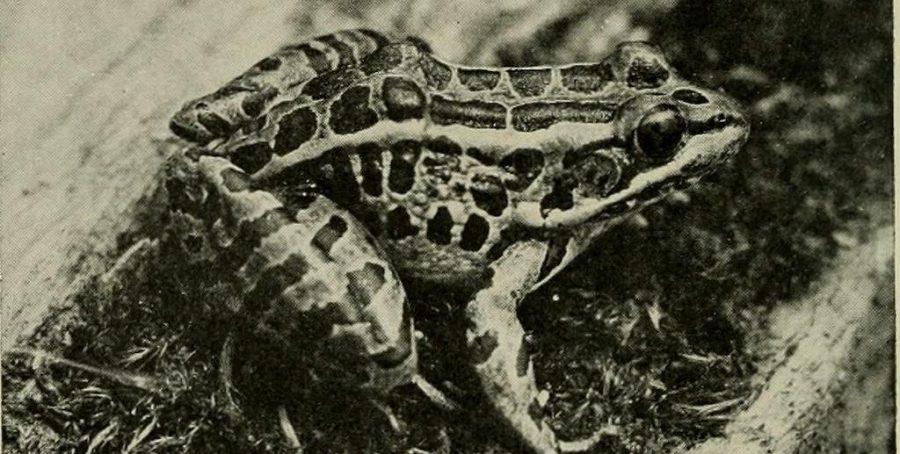 If the name of the group itself wasn’t enough for you to give this song a listen, then maybe the content is. Viagra Boys are a post-punk group from Stockholm, Sweden who combine a classic garage punk sound with clever and snappy lyrics. They’ve been compared to other post-punk groups like Circles Around the Sun, Dirty Projectors and Parquet Courts, but Viagra Boys has a unique, sometimes comedic voice that’s all their own. The song “Frogstrap” goes right into it with little introduction other than a cymbal hit and heads right into the songs grimy, hypnotic bassline.  Occasional guitar plucks and synth notes permeate throughout until the chorus hits, giving way to a small riff and jumping right back into the rollicking verse section. After the first chorus, a saxophone starts squeaking and honking rhythmically. I interpret this as a way to mimic the sound of the song’s protagonist, a spy frog.

The lyrics themselves are told in the second person, with the singer narrating. With the opening verse “Well I’m aware of your secret / when you showed up on the scene / I could tell they sensed something paranormal / that their faces showed disbelief” the song takes typical punk lyric clichés and adds something to them, what could be paranormal? What is even going on right now? Things continuously get more confusing until you realize — he’s singing about a frog! THE frog? The most punk amphibian in the animal kingdom?

“There’s nothing that gets by our man / unless it was an endothermic being / that could breathe through its skin / but how the hell could a tetrapod / be able to blend in?”

Yup, this song is about a frog with unmatched stealth; able to slip past everyone in the song without being detected.

Things get a little dicey for our hero. It’s revealed before the second chorus “and then the man with the red hat / he put his hands to his ears / he said he’d heard a faint heartbeat / said the imposter was near” doesn’t look good, right? But finally, the title of the song begins to make sense. “you weren’t afraid of suspicion / you knew the frog wouldn’t croak / they didn’t know you had a frogstrap / hidden under your coat.” The cherry on top — this is it  — the frog is packing heat.

So if you ever need a song that’s energetic and funny to pick you up during this recent onslaught of gloomy days, consider giving this a listen!