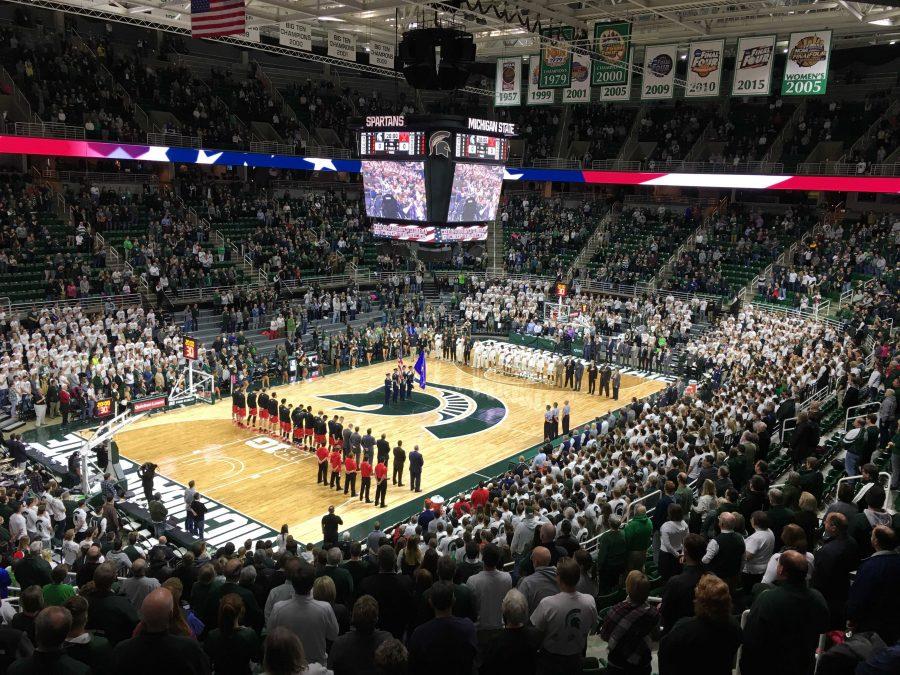 EAST LANSING, Mich. — The Spartans got out of the gates hot on a cold Tuesday evening in East Lansing, setting the tone immediately as they scored first and never relinquished that lead in a 93-47 exhibition game victory over Northern Michigan.

“You might wonder what we got outta that, I did get a lot out of that,” MSU coach Tom Izzo said. “I thought Cassius (Winston) played a lot better than he did Saturday, did the things I needed him to do and Nick (Ward) was as solid as he was Saturday, he played within himself.”

Michigan State is coming off a season where they went 30-5, ending the season in a tough Round of 32 NCAA tournament loss to Jim Boeheim and the Syracuse Orange. The Spartans open up the regular season with a marquee matchup against the No. 1 Kansas Jayhawks on Tuesday in Indianapolis at the Champions Classic.

The Wildcats refused to go away early on. An and-one from Northern Michigan guard Isaiah Johnson to make it a 9-7 game early. But it wasn’t enough for what was seemingly an overpowering roster for Michigan State.

The Spartans then got the offense going, using a 22-0 run midway through the first half to push the lead to 31-7 in a quick six minute span.

Despite the fight the Wildcats put up early, they got behind by double digits and took until the 6:40 mark of the first half to break the double digit barrier. Then the Spartans got out and ran, following a quick dish from Aaron Henry to Nick Ward for a massive dunk. The crowd was on its feet and Cassius Winston got rolling downhill as he scored six straight to add to what was an already impressive run for the Spartan offense.

“It was great, that atmosphere,” said Winston. “There is nothing like getting to play in front of the Izzone and playing the long court. It’s good you know that basketball season is finally here.”

The Spartans pushed the ball well early as they had 25 fast break points, and had eight different players score as they took a 43-13 lead into the break.

The second half was no different for Michigan State, who opened up the second half of play with a quick 17-6 run to take a 60-19 advantage that saw Ward get past the 20 point mark.
[su_pullquote align=”right”]”It was like a dream come true.”
-Gabe Brown[/su_pullquote]
Regardless of the play of Michigan State, Tom Izzo’s alma mater refused to roll over. Wildcat point guard Naba Echols continued to play well, scoring 23 points in the game and hanging with one of the top teams in the nation as he nailed several nice jumpers during the entirety of the matchup, en route to a 9-for-17 shooting night.

But one of the biggest storylines of the game may not even be the strong play of incumbent starters Winston and Ward. Fans saw a youth movement, as freshman Thomas Kithier (who has not played a full season of basketball in nearly two years following a dispute with the MHSAA), Marcus Bingham Jr., Aaron Henry, Gabe Brown and Michigan Mr. Basketball Foster Loyer all saw meaningful minutes throughout the game.

“It was like the dream come true,” said Brown on getting to finally play at the Breslin in a Michigan State uniform. “It’s amazing, you never really get these type of chances and only a few people can so I’m blessed to be here”.

The Spartans may have taken out the starters late in the game, with Ward (24 points) leaving near the halfway point in the second half, but the team continued its strong play. Michigan State led 85-36 following an Xavier Tillman layup with about four minutes to play. That 49 point lead was their largest of the game.

Michigan State is coming off a season where they went 30-5, ending the season in a tough Round of 32 NCAA tournament loss to Jim Boeheim and the Syracuse Orange. The Spartans open up the regular season with a marquee matchup against the No. 1 Kansas Jayhawks on Tuesday in Indianapolis at the Champions Classic. The game can be found on ESPN, Tuesday November 6th.