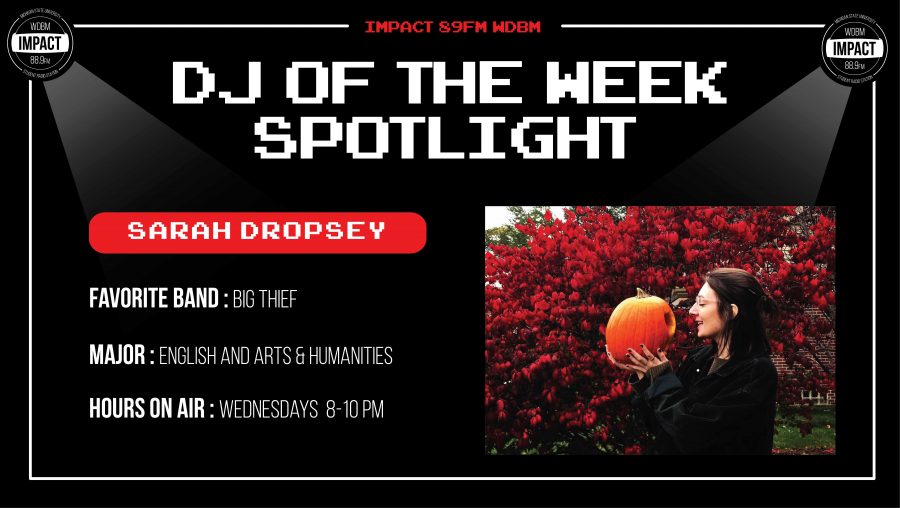 Halloween is just around the corner, and what’s spookier than confronting your own sadness? In this week’s DJ Spotlight, we got the inside scoop on Sarah Dropsey, the host of Pity Party, the place you can go for all your emo music needs. Sarah balances a double major in English and Arts & Humanities while hosting this popular specialty show. Sarah is the Marketing Director at Impact and works with Fusion Shows as well. Tune in to Pity Party every Wednesday 8-10 p.m. to hear all your favorite emo and punk classics, as well as some curveballs like Sarah’s favorite band Big Thief.

What made you decide to join Impact and become a DJ?

“I first met the station manager at a college colloquium when I was a freshman. She seemed really cool and said I should get involved with Impact. I told her I liked to write and I started working on the content team. Then I met Mackenzie who was the first host of Pity Party (she created it). I had no intentions of becoming a DJ, but I stayed friends with the people who were doing Pity Party because I liked that kind of music. Then Kevin, the host after Mackenzie, was graduating and told me I should be his co-host’s new co-host when he leaves. They kept me under their wing and I went up through the DJ ranks so I could do Pity Party.”

What has been your best on air experience?

Sarah: “Last year, Pity Party fell on Valentine’s Day which was super cool. I had probably fifteen people in the studio and it was kind of sad, but a lot of fun. We had a bunch of different DJs in the studio hanging out, and I polled Twitter for everybody’s favorite breakup song. My playlist was so good – I had Death Cab for Cutie and just the saddest stuff on it. Each time I did a drop, I would have my friends come on and, if they were comfortable, I would have them share an awkward date story or a sad breakup story. It was really sad, but really fun too because we all just joked around and bonded a lot. The graphics team made Valentine’s and I posted them on my socials. It was this whole big ordeal and it was very fun, and super wholesome. One of my friends I think had literally been broken up with that morning and then he came and hung out, and I was like ‘I’m so sorry, is this the best place for you to be right now?’”

What has been your favorite concert experience and why?

“One that’s sticking out in my mind is Mayday Parade on their 10 year ‘A Lesson in Romantics’ tour. I went with my absolute best friend and that was one of the first times she was in a “mosh pit” (quote unquote because it was kind of a weak pit, but still a lot of fun). We just hung around in the crowd and knew all the words to every song, and everyone was so into it because this is like a god-tier pop-punk album. I don’t know if that’s my favorite concert of all time, but that one is sticking out for sure.”

How do you think working in radio will affect your future career and life?

S: “No it’s okay! It actually vastly already has. I started working officially at Impact the summer after my freshman year. I was the Promotions Director and I’ve since moved up to be Assistant Marketing Director and then Marketing Director, which I am now. I went in wanting to be an English teacher, to work in publishing, or maybe be a librarian, but now I’ve interned at Fusion Shows and I work for them, I work at Mac’s Bar and I’ve worked at Meridian Entertainment. I’ve made the rounds and done the festival circuit, so it’s an industry I would definitely like to stay in if possible. I’m already in it, like I’m so deep in it. It was really cool seeing the behind-the-scenes stuff that you don’t think about people actually having to do, and I thought ‘Oh wait I can actually help put on shows? That’s a job?’”

If you were trapped on a deserted island and could only bring one album to listen to,

what would it be and why?

“My first answer would be Big Thief’s ‘Masterpiece’ because I feel like that’s on-brand for me. That album just runs the gamut of emotions, you’ll cry, you’ll scream, whatever. If not that one, then AC/DC’s ‘Back in Black.’”

“So far, I would say either Snail Mail’s ‘Lush’ because that’s one I can’t stop playing or… No, I’m gonna say Snail Mail’s ‘Lush’ for sure. That’s it. I try not to play it on Pity Party a ton because there’s a big crossover with daytime, but I definitely have played ‘Heat Wave’ at least four times.

If you could have any one superpower, what would it be and why?

Sarah: “Teleportation because I feel like I’m always late or I’m always in a hurry which translates to me getting places late and being sweaty. If I could teleport I would just be there instantly, and it would be fine.”

Matt: “But what if you get even worse at managing your time and put it off until one minute before you have to be somewhere?”

S: “If that’s a risk then I think I’m willing to take it just for the opportunity that it might make my life a little bit easier. So yeah, I’m gonna go with teleportation for sure.”

You can teleport your ears to a world of emo jams when you tune in to the latest installment of Pity Party this Wednesday night at 8pm, and let Sarah provide the soundtrack to your spooky Halloween night.