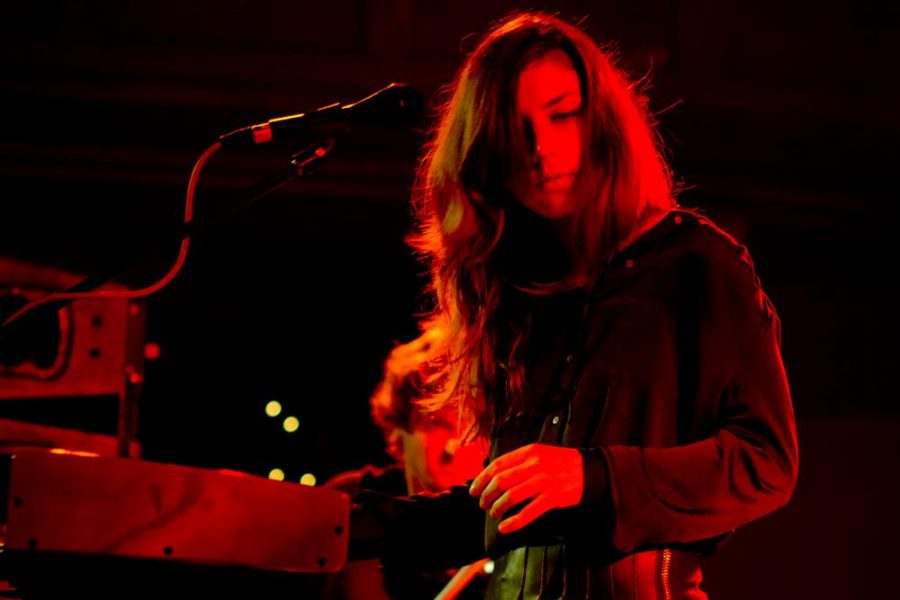 If you took Big Science-era Laurie Anderson, infused her with the enlightenment of a born-again ‘60s Baroque-pop savant, and placed her smack in the middle of the contemporary art and indie-pop landscapes, the resulting figure would be a dead-on embodiment of one Ms. Julia Holter. The proof of this analysis is in the pudding, specifically within her brand-new studio-album, Aviary, and in one of its most astonishing tracks, “Whether.”

Clocking in at a hefty 1 hour and 30 minutes in length, Aviary represents the most wildly ambitious studio-album release of Holter’s musical career — a career, mind you, consisting exclusively of wildly ambitious studio-album releases. And “Whether,” while certainly not its best or most central offering, does stand as one of the album’s most straightforward, fun and accessible songs — one with the potential to serve as a great primer for what this album, and this artist, has to offer.

Primarily consisting of jarring harpsichord hits, a blend of natural and artificial beats, off-the-wall vocal effects/manipulations and intricate-yet-distant compositional atmospherics, “Whether” perfectly embodies the dose of cold-water today’s indie scene is in desperate need of. The bold, raucous experimentation — confidently pulled off in a way that comes across as almost rock-and-roll in character or spirit — is a breath of fresh air and a rebellious, radical take on time and battle-worn indie-pop conventions. The song also manages to fit in perfectly with the art pop pillars of old (Anderson, Kate Bush, Bjork, et al) in that its forward-thinking nature and unflinchingly experimental ethos allow the record to transcend the works of her contemporaries — elevating her and her work to an existence outside the confines of the traditional indie realm, one entirely in and of herself and her personal musical vision.

If there was anything to be said about Julia Holter prior to the release of Aviary, it was that her discography expertly communicated a true sense of trajectory. Fans of her work have had the distinct pleasure over the years of watching her music undergo a strong, continuous evolution: from the theatrical grace of 2011’s Tragedy; to the delightfully unique chamber-pop of 2012’s Ekstasis, the ambient drone of 2013’s Loud City Song, and the sweeping, gorgeous baroque-pop of 2015’s Have You in My Wilderness. And, when armed with this knowledge, Aviary only becomes even more extraordinary, as repeated listens reveal an album tendered in keeping with each and every facet/era of her own, fine musical traditions.

Just look at the record itself. Everything’s here, from Tragedy’s allusions to the literature and romanticism of ancient Greece (“I Would Rather See”), the folky, versatile melodic invention-meets-dream pop sensibility of Ekstasis (“I Shall Love II”), the spacy and masterfully composed dissonance of Loud City Song (“Voce Simul”), and the dreamy, siren call-esque beauty of Have You in My Wilderness (“Words I Heard”). It seems as though Ms. Holter has finally come full circle — and it’s exceedingly fitting that this should be achieved through a release so incredibly emblematic of how far she’s come. So, make sure you don’t miss out on this extraordinary release from Baroque-pop’s leading light, and one of the most captivating and consistent acts modern music has to offer.