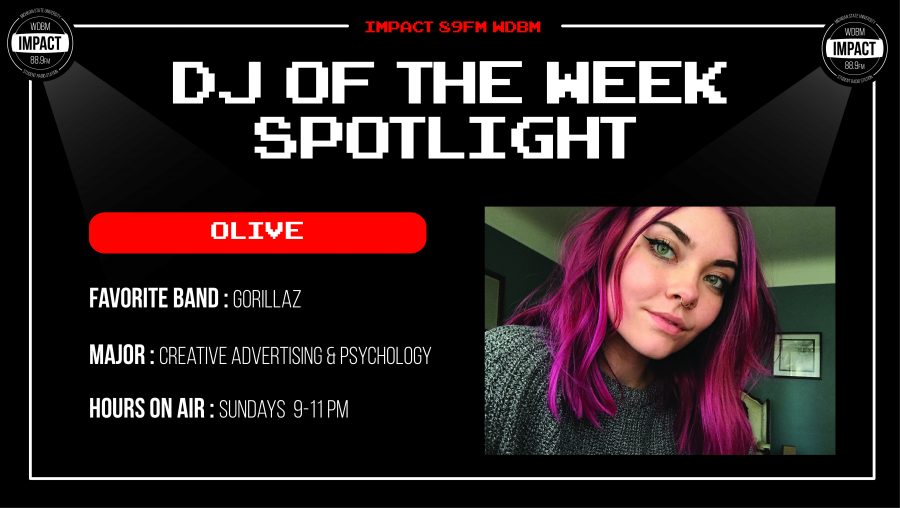 Olivia Mitchell, Impact’s station manager, is majoring in Creative Advertising. It’s rather lucky that Impact is affiliated with the CommArts college since that relationship brought Olivia to WDBM. Olivia’s also the host of the The Afterglow, is on air Sundays from 9:00-11:00pm. One of her favorite artist is Gorillaz. Read onto learn more about her and her perspective which she brings to the station!

What’s been your best on-air experience at the Impact?

I really like….I don’t know if there’s one experience, here’s such a weird mix of people that call into my show that I never really expect. Because it’s like, y’know the Sunday chill show, kinda late at night, but I’ve had someone’s dad called in on Father’s day and he told me how happy he was to be listening. It was really sweet. Someone’s mom or aunt or something was driving her kids around and was like “we just heard the greatest song on the radio, and we’re gonna go home and look it up, what was that called?” like, okay, old people love my show! I get calls about aliens– like, one of my frequent callers always tells me about his experiences with aliens, which I’m always open for hearing.I just like when people call in and tell me their stories, from different walks of life, and the cool things they have to share with me.

How has working at the Impact changed your life?

Hmmm…this is a lot to think about! It has a lot, I mean, it’s kept me super busy and definitely gotten me a lot more comfortable talking to people and sharing ideas, and being confident in what I’m saying, because when you’re live on air, you kind of have to be sure about yourself and know what you’re gonna say, so that was really helpful. It’s definitely gotten me more comfortable communicating with people, and y’know, comfortable with my personality, being broadcasted on air. I’ve met so many fun people, I know everyone’s gonna say that, but I really have met great people, and it’s great to be in an environment where I’m kind of always working on something creative and being challenged.

Who would be your dream cohost?

Okay, I have two people. One is Christoph Waltz, he is the bad guy in Inglorious Bastards, the bad guy in Water for Elephants, the good guy in Django Unchained, if you don’t know who he is, I am obsessed with him, I’m obsessed with the way his voice is. Like, I could listen to him talk for hours about nothing just because of the way he makes everything so…oh, no, I have so many people…okay I’m going to give you three. Christoph Waltz, cuz I love his voice, and his quirky little attitude. Two is Aubrey Plaza, because I feel like she has absolutely no filter in the weirdest way possible, so I wanna hear just odd things she would say on the air and say to me. I don’t know, I think she would be great. And then three is Jamaine Clement from Flight of the Conchords, because I love his sense of humor and his music from– like, Flight of the Conchords was oddly a huge role in my childhood. And so he would just make me laugh, and his New Zealand accent is….the best. So one of those three.

What is the best concert experience you’ve had and why?

Ooh boy…that’s a lot…okay, my best was probably at Electric Forest a couple years ago. I broke off from my friends because I wanted to see this artist that I’m in love with, but nobody wanted to camp out with me to get a good spot, and I was like “It’s fine, just meet up with me later, I probably won’t get that close, whatever,” um, I ended up making my way all the way up to the rail, front and center, and nobody could get to me because the crowd started coming in, and I was front and center on the rail for one of my favorite artists, and it was incredible. And that artist was Odessa, like they brought out a live drumline and had these great, great visuals– it was so pretty. I never thought I would enjoy going to a show by myself, but I was like, this is my new thing.

If you could go to any concert at any point in history, which one would you go to?

Oh my god, that’s too broad! I really love Amy Winehouse, so I’d love to see her in person. So I’d travel back in time and see that….I feel like a Beatles concert would be really fun and wholesome; I’d love to experience that.

Do you play an instrument and if you could learn to play any instrument regardless of time which one would choose?

I do not. I played the trumpet for a while? Kinda, that fell through the cracks…I know a little ukulele. And…all of them. I would love to play an instrument. Definitely piano and drums. I feel like drumming would be a lot of fun, and piano just kinda make sense. And you can play anything on the piano.

Earlier you mentioned Flight of the Conchords; what other kinds of music did you listen to the most when you were young that impacted your music tastes?

I don’t know. It’s just like, my parents weren’t like, anti-music or anything, but they just didn’t really share their music with me. The only thing I really got was my dad played classical and jazz records all the time, so that was the music I was hearing at home. But then with friends they were all listening to like, the top forty, now that’s what I call music kinda stuff from the 2000’s. There was a good amount of Britney Spears and Justin Timberlake, from my friends. But then my dad would show me like, Flight of the Conchords, or like this australian band called Axis of Awesome, just weird things he’d find on youtube and wanna show me. Like, alright, this is also music, it was oddly, I think it encouraged me to like, explore for myself.

If you had to pick three albums only to have on a desert island what would they be?

Woah, hard-hitters, oh man. Okay, one would be Plastic Beach by Gorillaz, I love them. Back to Black by Amy Winehouse, oh I need one more to like, round this out somehow. Um, I guess In Return by Odessa. So a bit of everything.