We Watch it for the Music | Ash vs Evil Dead 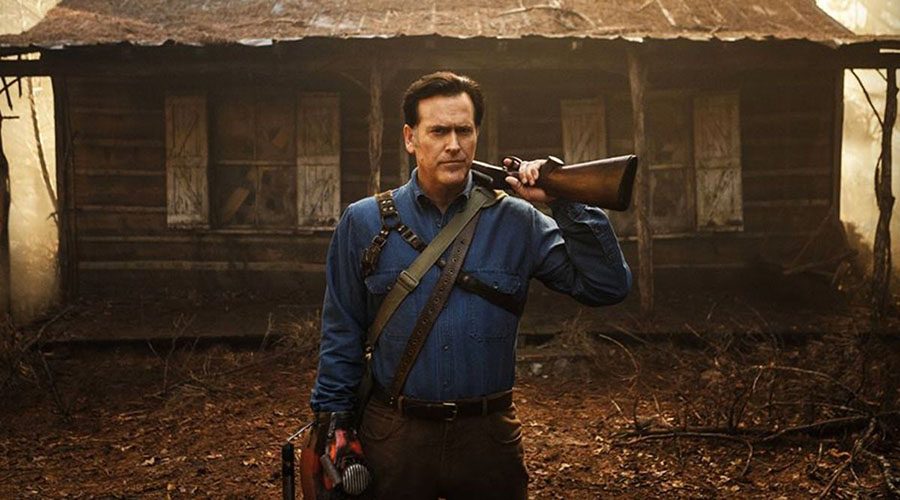 The medium of television can portray symbolism in a myriad of ways. I know this because my English teacher in high school told me books can do that, and TV is, like, watching a book. Why bother learning how to read when you can watch? Why spend the time concentrating and studying when you can get instant gratification? Why go through the trouble at all? (And the answer is yes, course read-write of I can, why ask you?)

Joking aside, this line of thought epitomizes the character of Ash Williams — protagonist of Ash vs Evil Dead, the STARZ spin-off that continues the story of Sam Raimi’s original Evil Dead and Army of Darkness films. For the uninitiated: the Evil Dead universe focuses on Ash’s continuous battle against the Deadites — demons who serve the Book of the Dead. These encounters have long been characterized for their excessive gore, slapstick humor and fast-paced editing. Since the first film’s release in 1981, the series has gone on to gain a cult-following as an amalgamation of horror and comedy. And much of the series’ acclaim can be attributed to its one-man show at the helm: Bruce Campbell’s Ash.

Ash is a macho-man with a chainsaw for a hand and an affinity for wisecracking one-liners – such as, “Hail to the king, baby,” “Groovy,” “This is my boomstick,” and “Shoot first, think never.”  And that’s pretty much it. In the 30 years since his first battle against the darkness, Ash has deliberately become more of a caricature than a character. He relishes in his glory days, and uses his movie-star-like charisma – and signature lack of a hand – to pick up women in dive bars. He lives in a trailer park, pre-games with Hi-C “Bopping Strawberry,” and works the same hardware store job he has for decades. His future, and any notion of success or meaning in his aging years, has stagnated; but he lives on, by living in the past.

Ash’s wistful negligence of himself is exemplified through his drunken stupors and continuous drifter lifestyle. And the series uses several other techniques to support this narrative: the cinematography and its neon-tinged callbacks to the ‘80s; the bleak, skeevy trailer Ash calls his home; his Oldsmobile, the polished relic of his past; his tight-fitting, aged wardrobe that he can barely squeeze into with the help of a corset.

Most notably, however, is the awesome soundtrack, lifted straight from the radio stations of Ash’s prime. In a 2015 interview with SyFy to promote the show’s premiere, creator Sam Raimi noted:

“When my brother Ivan and I were writing the character, and asking where he’d been for the last 30-35 years, we realized he had not grown. He stopped his development. My brother said the music should reflect the last time he was engaged in society, and living. My brother and editor chose those different pieces to reflect his lack of growth.”

While the soundtrack across all three seasons of Ash vs Evil Dead is superb, I’ve included selections mostly from the first season – starting with the pilot episode.

WARNING: Spoilers for the Ash vs Evil Dead – Season 1 follow.

The series opens with Ash preparing for a night on the town, looking for some action. As he strolls into a bar, he takes a shot at a dartboard while sizing up the venue – only to miss horribly. The bar closes in ten minutes. He doesn’t care. He swoons a woman with a fake origin story about his lost hand, which leads into a quick bout of passion in the ladies’ restroom which, for him, is a point of pride. In Ash’s mind, he’s still got it. He’s still the king, baby. And as the song collapses, so does the illusion — when Ash sees the Deadites come back into his life.

Journey to the Center of the Mind – The Amboy Dukes

The pilot ends with a deep dive into psychedelic ‘60s rock, as Ash and his new allies, Pablo and Kelly, go head-to-head with a Deadite in his trailer. Ash calls back on the hero he used to be, leaping in the air (while in slow-motion) to snag his chainsaw attachment before charging into the fight. It’s his first brush against evil in years, and the music alludes to Ash, once again, raising hell against hell. More importantly, for fans of the series, it’s the return of classic Evil Dead mayhem. “Groovy”.

The quintessential road trip song. This plays in the fourth episode when Ash, Pablo and Kelly hit the road to find Pablo’s shaman-uncle. It dually iterates on Ash’s habit of running from his demons, but this time, he’s on the move to find a solution to a problem he’s long-neglected and ignored. With Pablo and Kelly being new allies and motivators, the trio isn’t letting the Deadites get the upper hand again. It’s a momentary calm in what’s otherwise a sea of chaos.

Independent artist Bootsy Collins performed a cover of the Chambers Brothers’ classic hit exclusively for the show, but that cover has never seen commercial release. Bootsy’s cover plays at the end of episode 7, as Ash, Pablo, Kelly and their new ally, Michigan police Detective Fisher, successfully escape a survivalist camp after a deadly assault. Ash has become vulnerable to his new friends: he cares deeply for them, and wants nothing more than their safety. As such, though the entire group plans to travel to the infamous cabin for the final fight, Ash deserts them in an attempt to protect them, knowing that it’s his fight alone to conquer. His time has come. (And, as a neat throwback to the original movies, his old severed hand comes crawling back to the cabin! Nostalgia abounds!)

This one’s pretty straightforward. In Episode 8, Ash’s old severed hand grew a clone of Ash on its end. Ash meets his doppelganger, and they duke it out. Ultimately, it’s up to Pablo and Kelly to distinguish the real Ash from the fake Ash – which they do so by knowing Ash so well: that he’s a casually racist coward who will always take the easy way out of a hard situation. Real Ash then proceeds to dismember Fake Ash while this groovy number plays against the montage. It’s like the song was made for this episode. What? You weren’t thinking of evil autonomous limbs, casual racism against Asian masseuses, and dismemberment while listening to this? Oh. I guess that’s just a me thing, then. Ultimately, this song plays on what makes Ash vs Evil Dead so unique – its unorthodox marriage of horror with slapstick and comedy.

Back in Black – AC/DC

As the first season closes, Ash is cackling to himself in the Oldsmobile, while Kelly and Pablo look on in confusion and fear. Why? To spare their lives, and to spare himself of the responsibility of fighting evil, Ash makes a truce with the season’s villain, Ruby: she can keep the Necronomicon, but she has to leave them alone. Ash drives off to his paradise — Jacksonville, Florida — while the world literally begins to crumble around him. Though the season set up a lot of character development for Ash, he ultimately caved into his old ways, even if it means damning the world. But really, how else could a TV series focused around Evil Dead end a season? Ash is no hero, really he’s a bumbling idiot who gets lucky. His heroism, responsibilities and relationships with Pablo and Kelly continue to develop through the next two seasons, but by series end, it’s up to the viewers to see if Ash really changed. Either way, as season one closes, Ash is back in black, same as he ever was.

You can watch Ash vs Evil Dead live with a STARZ membership, or check out the first two seasons on Netflix.