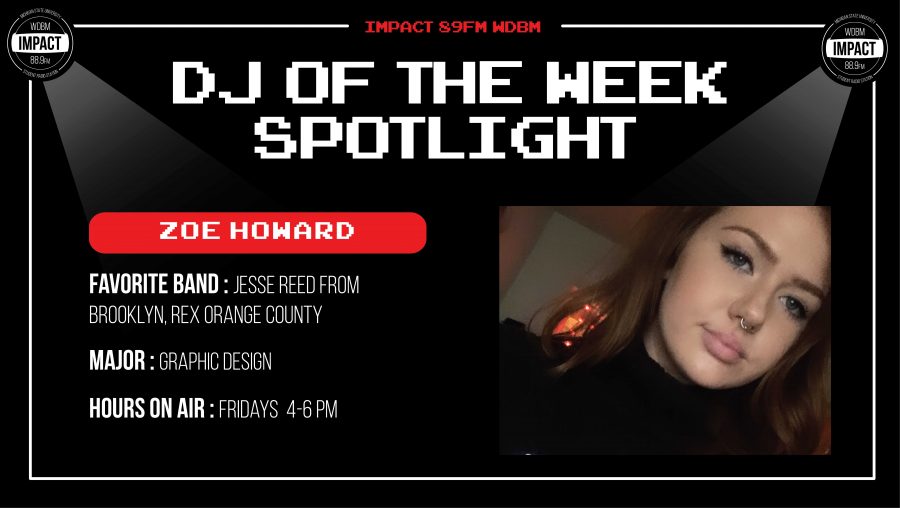 Looking for the greatest two hours of your life? Then look no further! Zoe Howard, a veteran at Impact, DJs for the station from 4-6pm on Fridays! Her shifts are characterized by their chill vibes – a mixture of throwbacks and the hottest new tracks – and her winning personality. Tune in on Fridays, and get to know Zoe! We hope you love her as much as we do.

1. What made you decide to join Impact and become a DJ?

I grew up in the area, and my dad is an employee at MSU. He’s always listened to the station, so I really grew up listening to it [with him]. My first semester here – about year and a half ago – I heard on the radio that Impact was having on open house, and I thought that was so cool! I’d never even thought about it before that, but after I heard about it, I came in, and… here I am.

2. What has been your best on air experience?

I don’t remember what show it was, but I was giving away a Top 5 prize. A listener won it. We were talking about the concert, and I just commented, “You’re so lucky!” Then he invited me to go with him. I said,“Hmm, I probably can’t, but thank you, [person], for being nice!” A lot of the listeners are really cool, and like to snowball conversations from experiences like that, which is really nice.

3. What is the best concert experience you have had? Why?

I saw Bully in mid-September at the Pyramid Scheme this year! I went with my best friend. The lead singer, Alycia (sp), has such a cool voice and such great energy. They’re so “all-over-the-place”, but in a good way. I just had the most fun time; it was such a cool show. It was on a Tuesday or Wednesday, and it was already smaller venue, so we were standing in the front row. It was a lot of fun! Even the opener was great – a group named Reggie. My roommate fell in love with the woman who was the lead singer of their band. “I’m in love. We have to meet them.” It was really cute.

4. How do you think working in radio will affect your future career and life?

I think it’s really helped me develop my communication skills. Being able to work with people – you know, train DJs, and collaborate with a team – has really helped that. Figuring out how to communicate in a way that teaches people from all walks of life and meets their needs is so fun and different. I never thought I’d be doing something like this, because I hate public speaking, but it’s been really good for me.

5. If you could play an artist non-stop on the air, which would it be?

I have three: Rex Orange County, Mac DeMarco (always and forever), and Frank Ocean. And I love that we have such a variety of selections from each of them.

6. What is your favorite part of the station?

I think that I would never meet some of the people here without having started here. Some of my best friends are my coworkers, and I never would have met them without the Impact. There’s also a lot of opportunities that the Impact gives you to explore and build [your skills on]. It’s a great resume builder! For example, I’m a Graphic Designer, but there are so many groups and teams to volunteer for and try something in a new realm.

I LOVE SUCKERS. Blow-pops are the ones that have bubblegum in the center, right? I don’t like those ones. Those are not the same! Tootsie-Pops are where it’s at. The Pomegranate one is the best, but it not the most common to come by. It’s got a pink wrapper with brown writing; if you ever see it, get it! But I honestly will take whatever, except for chocolate. Who makes a chocolate sucker?