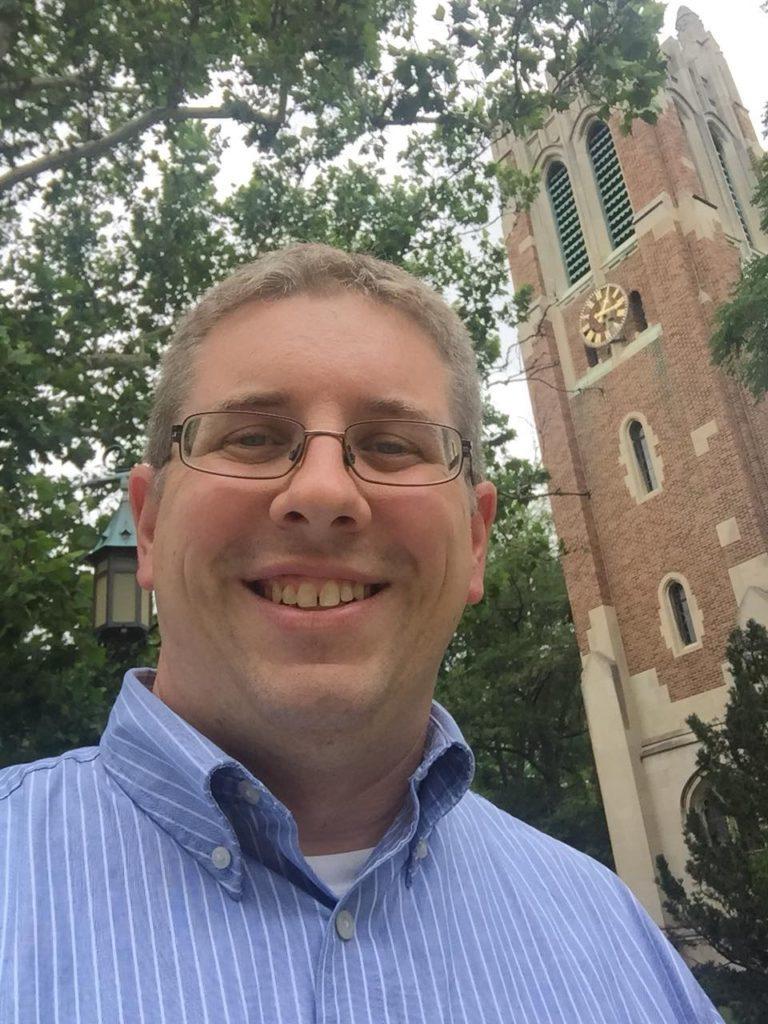 It’s not every day that you get to interview your boss. And it’s not every day you get a boss as easy going and friendly as mine. To prove my point; when I asked him if he wanted to be interviewed for the Undercurrent, he said yes without even giving it a second thought, and three hours later we were in the studio. Here to fill the role left by former General Manager Ed Glazer, and without further ado – meet Jeremy Whiting, Impact’s newest GM.

Sophie: Do you want to start with the easy question, your name and where you’re from.

Jeremy: Sure, sure. My name is Jeremy Whiting and I am currently the General Manager of Impact 89fm. I went to Michigan State for my bachelors and masters degrees and teaching certifications from 2000 to 2010. Before that I called home Lake Orion, in the metro Detroit area.

S: While you were at MSU did you have a connection to the Impact?

J: Yeah, so I waited until my sophomore year, I believe, to start working at the impact and I didn’t plan on going into radio but…I thought I would be super disappointed if I didn’t at least try working at a college radio station. Just to be able to say when I was older, “Oh I did college radio when I was at MSU. So, I was very nervous but I came in and I did it, and my original thought was to do production work but they kind of forced us to all have air shifts. So I started that and I found out that I really liked doing that. So I went on do be a DJ and I was in a number of different director positions. I hosted the Basement the local music show. I had a good run, we had a good time.

So where has he been the last eight years? Well after leaving MSU, he dove head first into teaching high school in a nearby district. And he loved it! He had found a job where he felt valued and supported. He loved the students and the school. But then one day he got a call from Ed.

S: How did you hear that the position had opened up?

J: So, Ed Glazer has been the General Manager for the past few years. Ed was actually a director when I was a director. So at one point I was his boss as station manager and he was web director or something like that. Um but yeah, Ed was around for a long time and I’m friends with him and he gave me a heads up the position was opening. He said, “I know you are really happy with your job, but just so you know I’m moving to California and this is opening up. And as you know, I think you’d be a good candidate.” So he gave me a heads up and that’s how I found out about it.

But even though he had loved the Impact in college, he wasn’t initially sure he wanted to come back. Like I said he loved his job at the high school, and it had become really important to him.

S: So you said your initially reaction was kind of hesitant…did you get any input from your family or from any of the people you were working with before?

J: Oh yeah, absolutely! What a … yeah it was a big leap. Your identity in some ways you know, a slice of your life is built on what you do as a career. And so I was considering a fairly significant change in my career, instead of being a teacher. It was hard to go around and figure out “well what do you want to do in life?” you know? It was a difficult decision choosing between two things that you knew were very very good.

Walking into the first interview here at the Impact Jeremy still wasn’t sure he was ready to take that leap of faith. But as he continued through the process, he became more and more confident that this is where he wanted to be.

J: In conversations here like through the interview process. Just talking with the current directors and being back in the station, I was getting sad about possibly not getting it and having to leave. That’s when I started to really know. Yeah I think I really really really do wanna come back and have this job.

S: So what was your reaction when you found out you got it?

J: I was incredibly happy! I trusted that I was a good candidate, I thought I had a pretty good chance of being called back at least for a second or third interview. But when I got word that I was the pick if I wanted it. Um… yeah… It was almost a little emotional because I was here for eight years, you know I was at MSU for ten years, I was at the Impact for eight years. And it was something unexpected in my life to be coming back to it, and in many ways it felt like a homecoming. So, yeah I was ecstatic.

So now he’s here, and he’s killing the game! Of course there have been adjustments, but overall he is excited about all of the new experiences.

J: It’s a different role than when I was here as the student station manager. So it’s been really really cool to be in the position as almost the final say on a lot of things, and just do things. Like say “hey I think we should do that” and a lot of the time it doesn’t have to go through hoops to get done. And there is such a great freedom to that, to know yeah this is the right decision. I think my time a way has really helped with that because I’m able to take all of that knowledge and come in with authority and say “I do know what is right, I am the expert on this”, and I don’t feel like it’s a cocky thing it’s just I have that experience.

If there is one thing I took away from my conversation with Jeremy it’s that you just never know where life is gonna take you. I asked him if he’d had any time to reflect or had a moment of clarity since entering this new position, and he said yes!

J: It was in [this studio], maybe a week ago. I was late, it was like eleven o’clock, and I forget what I was in here for. But, I’m sitting in here, just kinda looking round, and just kinda thinking yeah somethings are looking different. I was looking at a Facebook post of one of my friends, an Impact friend from back in the day, and they posted an old photo of them interviewing a band, right here in this room. And I sat down in the same seat where they were, with the same microphone and everything. And I was like “Man!” This is like ten years later, and how unexpected that I would be able to be sitting here and be in the same position in a totally totally different role. Things are different but it’s the same. And it was late at night, and it was just one of those things that was just like Man! Weird how life works out, you know? I was pretty cool that that popped up on my phone just as I was sitting here.

Even though he is no longer technically a teacher, Jeremy is still impacting students every single day here at the station. And I think I speak for all of us when I say I’m looking forward to working with him.