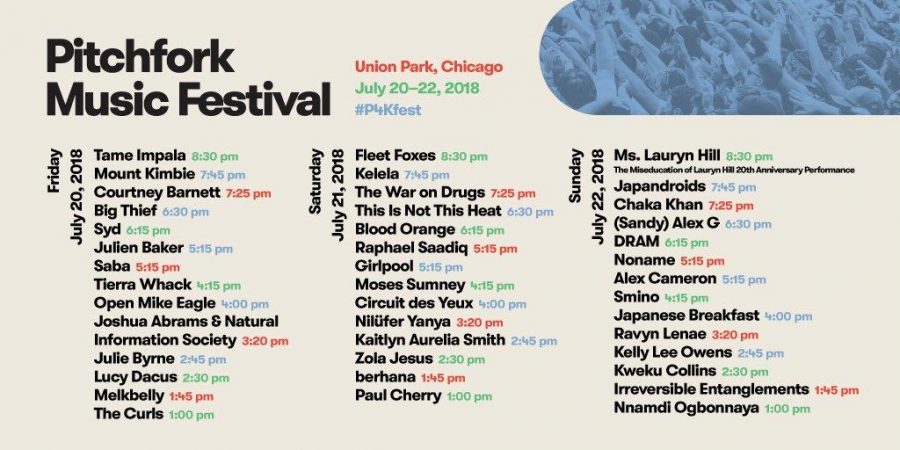 Pitchfork Music Festival has been thriving since 2006, when the three-day festival first began, by creating an atmosphere where alternative music lovers can feel at home. One of the best parts of this smaller, city festival is that you have a wide range of alternative music from hip-hop to indie to hard core. There are many amazing acts performing at the festival this year, but make sure to catch these four female artists that have been on the rise in recent years.

Syd’s smooth beats and lush vocals are captivating, and I can’t wait to get lost in the live performance of her psychedelic album Fin. Syd’s 2017 release of Fin was the kick-start to her solo career after working with rap-group Odd Future and creating albums with The Internet in the past. Fin explores hidden hook-ups, LGBTQ+ sexuality and independence over sensual synths to create an elegant masterpiece that can be relatable to many listeners. If you want to be surrounded by love and intimacy, make sure you catch Syd’s performance.

Girlpool consists of two females, Cleo Tucker and Harmony Tividad, who use their vocal, guitar and bass skills to create folk music with a pinch of punk. These two girls have been rocking out since 2014 when they released their first, self-titled album. In 2017 they released their most recent album, Powerplant. For this album the duo added a drummer, Miles Winter, to perfect their slow, emo sound underneath their harmonizing vocals. Girlpool tackles issues such as slut-shaming, growing up and intimacy through their music. If you want to be caught in a crowd of female-powered emotions, go to Girlpool’s performance.

(Caption: Girlpool performing at the El Club in Detroit during the summer of 2017.)

Michelle Zauner, better known as Japanese Breakfast, does an amazing job of creating music full of emotion that you’ll want to spend the night dancing to. In 2017 the one-woman band released Soft Sounds from Another Plant, which features her shimmery voice over somber guitar riffs. This album does a good job of doing exactly what it says it is going to do–make you feel like you’re on another planet. Zauner explores queer sexuality, domesticity and duality in this otherworldly album. If you wish to be transported to another planet filled with gloomy beats and sad lyrics which explore our own society, make sure you don’t miss Japanese Breakfast’s performance.

Noname, or Fatimah Nyeema Warner, is a Chicago rapper who had been on the rise since 2013 when she was featured on Chance the Rapper’s mixtape Acid Rap. Since then she has released her first album, Telefone, in 2016 which highlights important conversations she has had over the telephone. Noname spent years in Chicago at poetry slams and open mics, and that surely shows in Telefone. While playing with words over funky beats, Noname delivers the full emotional spectrum from devastation to pure joy in her album. Noname raps about black women’s problems, growing up and other hardships in this freedom-inspired album. If you want to be a part of a fun show that focuses on serious topics put on by a Chicago local, make sure you stop by Noname’s performance.