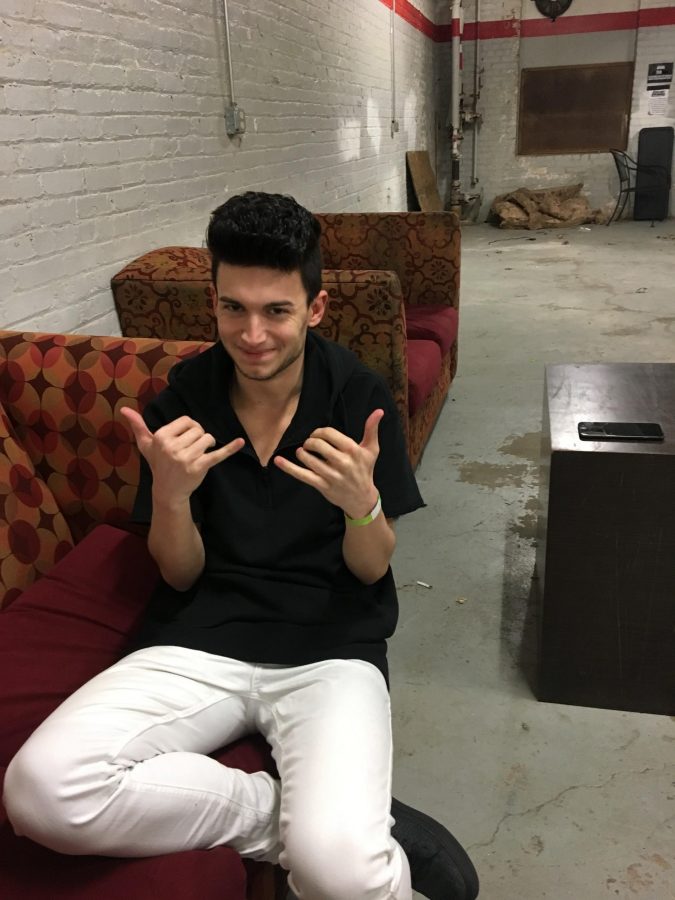 Have you been searching for a young, handsome, up-and-coming artist to fall in love with? That might be because you’re a teenage fangirl. Nevertheless, Joe Kirk’s your find.
With an impressive musical track record he doesn’t flaunt, and a sense of humor he does, Joe was eager to meet with us at The Loft and share his story.

First things first — how did he get introduced to music? “I was 4 years old, and… I sang ‘Happy Birthday Jesus’ in [my hometown’s] Christmas play. And ever since then, I knew I wanted to be onstage. I wanted to live onstage,” Kirk said.

“I’ve been a songwriter since I was 14… and I was always singing. Anywhere I could sing, I would — school, karaoke places, parks, anywhere. Back then, it was less of a job. It still isn’t a job to me, but back then I was singing and there were no deadlines, no pressure…”

That all changed when Joe went on The Voice — but he faced the brutal audition process first.

“I tried out when I was 15… I made it through the first round of cattlecall — that’s what they call it… like 15, 20 thousand people come to a city and try out… I made it past the first round but, came for the callback, didn’t make it.”

While a clear setback, being cut didn’t stop him. “I waited 2 years, and they came to Nashville, which is where I’m from… I was 17 at the time, so I had to have a guardian with me.” He couldn’t help but laugh as he started to pantomime. “I called my mom and was like, ‘MOM! Get in your car and come downtown!’… She was like, ‘We are not doing this again. It was like 9 hours last time.’ And I was like, ‘MOM! Get. Down. Here.’”

Joe got into the blind auditions, and earned a 4-chair turn with his rendition of ‘Lego House’ by Ed Sheeran. He picked Adam Levine as his coach, and was eliminated during his battle round against Alessandra Castronovo, only after each judge confessed that it was an impossible decision.

However, Joe’s spot on The Voice was only the start of his career.

Joe cracked another smile, adding, “Not really! ‘Skyrocketed’ meant I climbed a little hill, and I started having a bit of a fanbase. I started writing more music — I was writing more, I was in the studio more, I moved out to California for a bit. Just a lot of opportunities have, because of the show, opened up to me.”

I started the next question. “So now you’re on tour-”

“Well, tell us about that!”

“It’s just, life moves really fast. Over the past 3 years, I’ve just really been developing my own sound… So when the tour was put together I was like, ‘Uh, ok!’ It was a conversation I didn’t take seriously at the time we had it… But as it came time, and it started getting more real… I just remember packing my bags and I kept getting cold chills, cuz it’s like ‘Oh my gosh, it’s happening!’ But yeah, it’s weird. I mean, it’s exciting! It’s not a bad weird, it’s a good weird… I’m gonna stop talking now!”

One of the most endearing characteristics of Joe is the fact that he doesn’t take himself too seriously. “My favorite artists?… Do you have an hour?” He laughed and continued, “My brothers [Tryon]… Justin Bieber, Shawn Mendes… Myself.” Joe’s voice dripped with sarcasm. “Yeah, my favorite person to listen to is probably myself!”

Now, if you listen to Joe’s music, he definitely comes off as a pop artist. But what does he describe his music as? “Personal. I love writing ballads, just because I feel like that’s what people connect with… Every song comes from a personal place, and I write about experiences that I’ve went through.”

Joe’s debut EP, All I Know, is set to be released June 18th, and he gave us a sneak peek at some of the songs. “‘Leave Me Waiting’ is an upbeat song about me pursuing a girl and her just shrugging me off. ‘All I know’ is like, it’s actually about that same girl — yeah, she had me, I’m telling you! And then ‘Let This Go,’”

I smirked. “It’s about letting her go?”

If you want to get a hold of Joe’s music, however, you won’t need to wait for June. He has two singles out: ‘Believe’ and ‘Ten’ available, as Joe said, “on iTunes, apple music, spotify… Pretty much everywhere that you could find them.”