Spartans fall flat in second half, drop rematch with Michigan 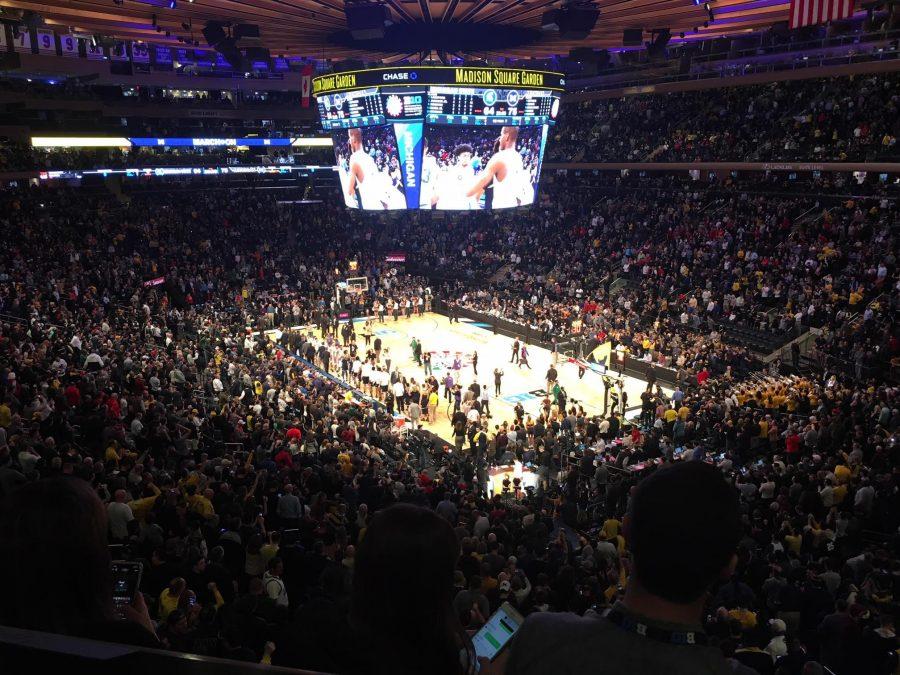 NEW YORK — The battle for the Great Lakes State moved further from home than it’s ever been played. But just as it was when it was played in East Lansing, there was one team that appeared to want the win more Saturday.

In a Big Ten tournament semifinal matchup at Madison Square Garden, No. 5 seed Michigan controlled the second half to outlast the conference’s regular season champions from Michigan State, 75-64. The Wolverines used a 10-2 run to regain the lead out of the break and never relinquished the lead again.

Michigan (27-7 overall) started off with the upper hand, too, getting out to a 13-4 lead. The game began in classic rivalry fashion too; both teams jawed after whistles, one of which led to a technical foul called on Ward. Duncan Robinson hit one of two technical foul shots to extend the Wolverines’ early lead to 14-6.

“They came out and we got into that little scuffle,” Spartan sophomore Miles Bridges said. “We should’ve come out, locked down on defense, rebounding, did all the little stuff, but we… I don’t know what happened. They just played harder than us.”

The Spartans (29-4 overall) did storm back, though. They scored the game’s next 10 points, swinging momentum their way after a Cassius Winston lob was slammed home from Gavin Schilling.

The two teams traded blows for the rest of the first half. Miles Bridges struggled with his jump shot, only making two of his first eight attempts. One of those shots was a desperation three with the shot clock running down to give the Spartans the lead, 27-26.

“So much respect for Michigan State,” Michigan coach John Beilein said, echoing his compliments that followed the Wolverines’ 82-72 January win in East Lansing.. “We beat a really, really good basketball team, a team that deserves where they are, a top 1-to-10 ranking. They can win the national championship.”

Xavier Tillman closed out the half with consecutive hustle plays to keep momentum in his team’s favor. His perimeter defense on Moe Wagner forced a poor three-point attempt that hit the top of the backboard. Tillman then ran out in the open court and dunked a dime from Winston to extend the lead to 29-26, a score that remained until the half.
[su_pullquote]““We beat a really, really good basketball team… They can win the national championship.” –John Beilein [/su_pullquote]
“We bounced back and actually played pretty good the rest of the half,” MSU coach Tom Izzo said.

A 10-2 Michigan run to start the half completely flipped momentum back the way of the Wolverines, who took a 36-31 lead. Wagner hit three shots in that stretch to bounce back from an 0-for-7 first half.

“I told [Wagner], this is my great motivation at halftime: ‘Hey, Moe, are you going to make a shot? Because right now you’re stinking the place up. Just make one shot.’ We played with each other like that. He just smiled: ‘Yes, Coach, I can do that.’”

Bridges did his best to bring the Spartans back into it after being benched early in the half. He began to drive to the hoop and force his way to the basket. He scored 11 in the half to give the Spartans a chance, after a first half that saw him shoot too many jumpers.

“I was just being aggressive,” said Bridges, who surpassed 1,000 career points at MSU in the game. “I should have been like that all game. But I was settling too much.”

However, Bridges got no help from his teammates. The Spartans didn’t improve from the field while allowing Michigan to shoot 66 percent for the half (71 percent from beyond the arc).

“The second half we couldn’t make any shots, and I think it affected our defense,” Izzo said. “We missed a lot of good shots.”

The final blow to the Spartans’ chances, both mathematically and emotionally, came with 2:48 remaining in the game. Clinging to a five-point lead, the Wolverines struggled to get an open look on an offensive possession. With the shot clock winding down, Muhammad-Ali Abdur Rahkman hoisted up a deep three that rattled around the rim and fell in, pushing the lead to 62-54.

“The play broke down a little bit and I was dribbling at the top of the key and saw the shot clock was running down,” the senior said. “It felt good. I felt like it should have swished, but hit the back of the rim and it went in. So I’m glad.”

One of the worst free-throw shooting teams in the league this year, Michigan bucked the trend and hung on by making just enough from the charity stripe down the stretch, making 20 of their 27 foul shots in the final 20 minutes.

The Wolverines advance to play Purdue in the Big Ten championship game Sunday afternoon at Madison Square Garden. They look to defend their tournament championship from last season.

For the Spartans, they will not play for at least another 12 days, when their NCAA tournament run will begin. They await the decision on their seeding, which will come on Selection Sunday, March 11th.