Winston helps No. 2 Spartans pull away from Oakland at Little Caesars Arena 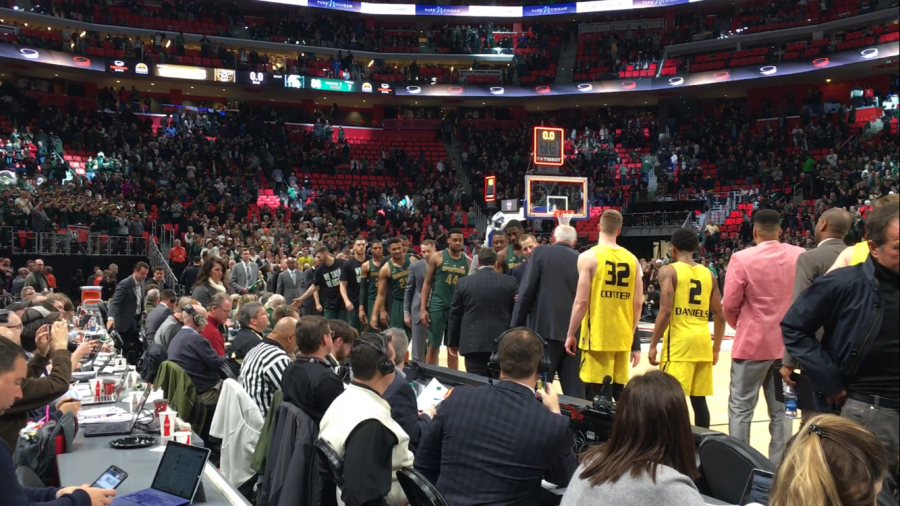 DETROIT—In neutral-site action in the state’s largest city, Game Two of the Hitachi Basketball Showcase between Michigan State and Oakland came down to the wire.

And as he has so often has this season, Cassius Winston took over late in a tight game to ignite a Spartan victory.

Winston scored all of his 19 points in the second half, including the Spartans’ last 14, to power No. 2 MSU past the pesky Golden Grizzlies, 86-73. Winston led five Spartans who scored in double figures, the second time this season that has happened.

After Michigan’s blowout win over Detroit Mercy in the first game of a doubleheader, the crowd at Detroit’s brand-new Little Caesars Arena was treated to a tight contest between the Spartans (10-1 overall) and Golden Grizzlies (6-5 overall). The Spartans only led by five at halftime, led by 11 points from Nick Ward (15 points, 15 rebounds for the game) and nine from Josh Langford (17 points for the game).

The Grizzlies fought to keep in the game with Kendrick Nunn’s lethal scoring ability. The Illinois transfer scored 16 points in each half to lead all scorers with 32 on the day.

The Spartans’ poor first half performance could be attributed to turning the ball over nine times, four of which were courtesy of Winston.

“In the first half, I had a lot of turnovers,” Winston said. “We were up [12 points] and I had two turnovers in a row, and that kind of got their momentum going.”

Just over three minutes into the second half, the Grizzlies took the lead on one of Martez Walker’s two four-point plays after being fouled on a made three. For the next nine minutes, the teams changed leads six times and had six ties. With 8:01 left, Jalen Hayes hit a three-pointer to tie the game one last time at 66.

After Jaren Jackson broke the tie with a three, followed by a Miles Bridges three, Winston took over. He hit back-to-back three-pointers to push the Spartan lead to 10 with 3:04 to go. He closed out the game with two layups and four free throws to seal the Spartans’ 16th win in 16 tries over Oakland.

“When I got him mad, he played a lot better,” Izzo said. “He went in with a vengeance in that last 10 minutes. He told me what he was going to do on the bench, so he went out and did it.”

Winston bounced back after his poor first-half performance, taking charge on the sidelines with his coach.

“You gotta go out there and prove why you gotta be in the game,” Winston said. “I told him to put me back in the game, and I’ll take care of it. He told me he wasn’t gonna put me back in, and then he gave me a chance. That’s our relationship right there.”

Winston has similarly hit clutch three’s at the end of several games this season, including the home win over Notre Dame and the road win at Rutgers.

The Detroit native’s run was set up by tough play from teammates Kenny Goins and Tum Tum Nairn. Goins had six assists in the second half, while Nairn locked in on Nunn.

“If I look for stars and heroes, Kenny Goins did an unbelievable job, and Tum… just amazing,” Izzo said.

The game was set up as a home game for Oakland, who had their own PA announcer. But the crowd of 20,645 at Little Caesars Arena, which was announced as the largest crowd in the arena’s young history, certainly favored the Spartans.

“You could really feel it in the arena, especially down the stretch,” Jackson said. “You could see it when I was shooting free throws behind the arena. There were just so many Michigan State fans. A lot of green.”

The Spartans travel home to for a quick turnaround game against Houston Baptist Monday night. Tipoff at the Breslin Center is set for 6:00 p.m.