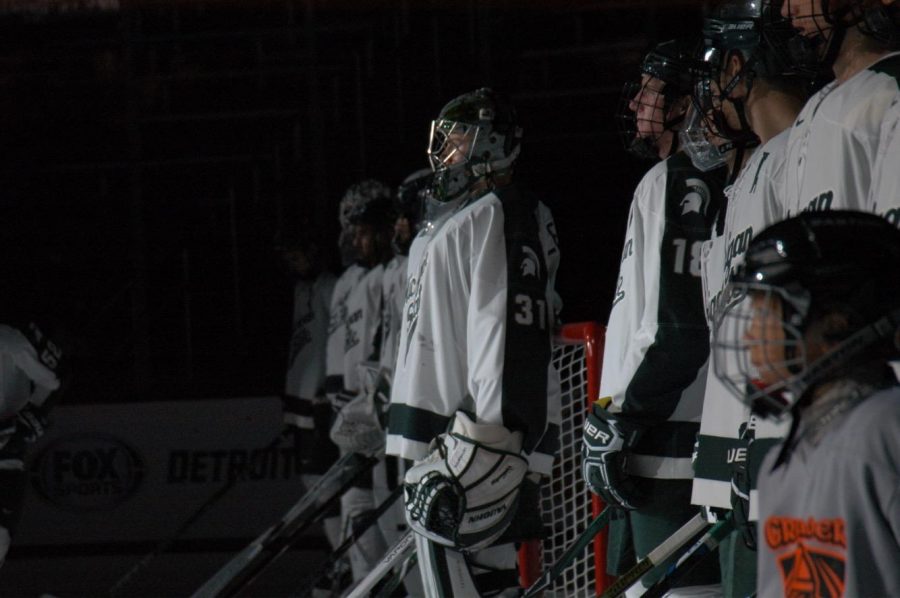 “Give our guys a lot of credit,” Spartan coach Danton Cole said. “They’re continuing to learn. We’ve got to find a way to do that more often but they’re getting there. We had some bumps and bruises that will be good to heal up but overall good for them. That’s a positive way to close things out here before Christmas.”

The first goal of the night came on the power play as U-M’s Niko Porikos took a penalty for boarding Butrus Ghafari. Shortly after at the 8:18 mark of the period, Patrick Khodorenko found some open ice in front of the net and one-timed a pass from linemate Mitchell Lewandowski for his fifth of the season giving MSU a 1-0 lead. Taro Hirose was credited with the second assist on the goal, just one point of his total of three on the night.

“He was outstanding,” Cole said when asked about Hirose. “When he goes and plays like that it gives everyone confidence.”

Unlike last night, the KHL line was a force in this game, putting up eight points between the three players.

Khodorenko would strike again with just 4.9 seconds left in the first period when the sophomore tipped a Jerad Rosburg slap shot from the point. After a challenge from Michigan coach Mel Pearson, the goal counted. Because of the lost challenge, Michigan lost its timeout and headed into the locker room down 2-0 after 20 minutes of play.

The Spartans doubled their lead in the second period, going from two goals up to four.

The first goal in the period was a result of Michigan State’s power play connecting for the second time in the game. As Hirose and Carson Gatt set up at the points, Gatt slid a pass over the Hirose who made a move the get around a Michigan defender and sent a pass to a wide open Lewandowski. The leading freshman scorer in the nation wasted no time one-timing his 10th goal of the season and MSU went up 3-0.

Brennan Sanford had a chance to add to the Spartans lead with a penalty shot that came with just over eight minutes to play in the period. Sanford was tripped on a breakaway and Cole elected to go with a penalty shot. On the free shot, Sanford was stopped by the blocker of Hayden Lavigne and the score remained.

However, Sanford’s opportunity would not be for loss. With 5:10 to play in the second period, Mitch Eliot, freshman defenseman and son of former Detroit Red Wing Darren Eliot, scored his second of the season when he snipped top-shelf on Lavigne and the Spartans went up 4-0, matching the goal total for Michigan the night before.

The Spartan offense was buzzing all night and it didn’t stop in the third period as they added another goal on the power play. This time it was Logan Lambdin who scored Michigan State’s fifth goal of the night just 4:50 into the period. The goal counted as the Spartans third with the man-advantage as MSU wound up going 3-for-5 on the night.

Not to be lost in all this scoring should be the performance of MSU goaltender John Lethemon. The sophomore has made 25 or more saves nine times season, earning three shutouts in the process.

“He was awesome,” Hirose said of his goaltender. “He’s a rock and when we have those mistakes, we can always count on him to come up big for us.”

The Spartans snap a three-game losing streak with the win and improve their record to 7-3 at home this season. Winning is an important piece to the puzzle, but Cole hopes the momentum will continue to build for his team above all else.

“There’s a process,” the first year Spartan coach said.  “We want to keep that momentum and keep building. I didn’t think we lost any at home here last weekend even though we didn’t get any wins. We’ve had some pretty good crowds here getting up over 6,000 and it’s important that they see that we’re heading in the right direction.”

Up next for Michigan State, coach Danton Cole’s former team in the U.S. National Team Development Program U-18’s. Puck drop from Plymouth. Mich. is set for 7:05 p.m. on Dec. 16.