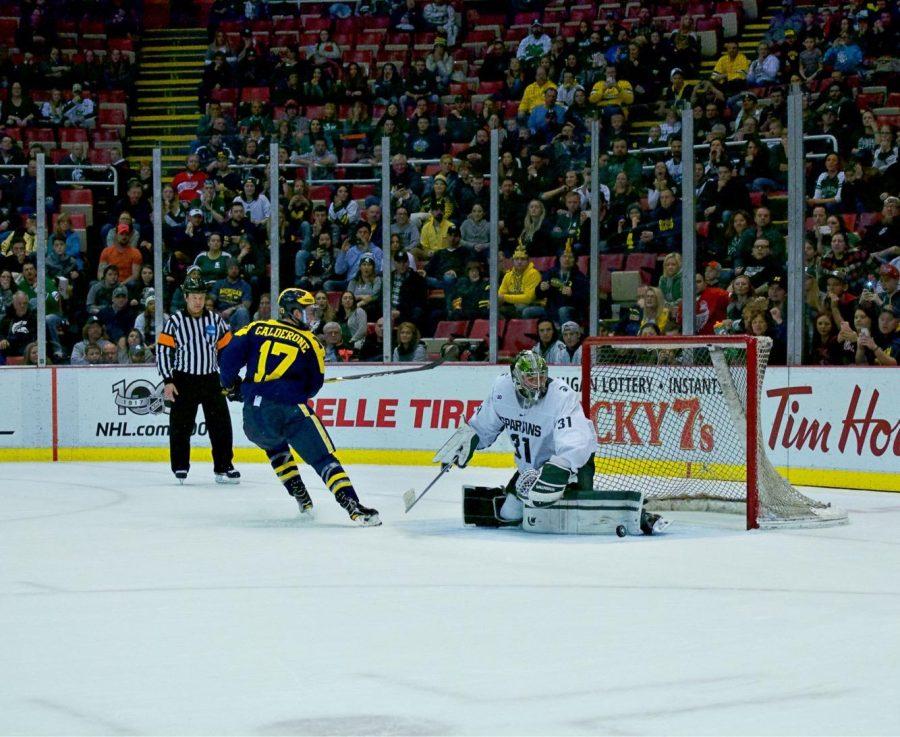 ANN ARBOR, Mich. — As the snow began to fall outside the walls of Yost Ice Arena, Michigan State fell along with it on Thursday night and for the second straight game, the Spartans were shutout in a 4-0 loss to in-state rival Michigan.

“I thought we were okay for about five minutes,” Spartan coach Danton Cole said postgame. “After that I didn’t really like most of the game. I think Michigan outplayed us in most areas, especially with skating and being ahead of the play. If we don’t skate better than that we don’t have a chance against anyone, let alone Michigan.”

The first period between the Spartans and Wolverines followed suit with most other opening 20 minutes for Michigan State this season as evidenced by another hot start. Though the two teams traded power play chances, no one was able to find the back of the net and the period ended scoreless.

The first penalty of the night came just under four minutes in when freshman Quinn Hughes took a tripping penalty as well as a seat in the box. On the ensuing man-advantage, one that has been operating at 20 percent on the season for MSU, had some good looks. Spartan freshman David Keefer had one of the better chances as he parked himself on the goaline to the right of Wolverine goaltender Hayden Lavigne. Keefer took a pass down low but was beat by Lavigne’s pad and the score remained even.

Michigan, who was by far the more physical team in the game, got their chance on the power play when Sam Saliba took an unfortunate hooking penalty when his stick was caught in between the legs of a Wolverine amidst a scrum. The Spartans and their penalty kill, one which has killed off 40-of-51 opportunities on the season, did well to get their sticks in the passing lanes, causing fits for the Wolverine attack.

As the second period got underway, the Wolverine offense began to wake up and take the game over.

The Wolverines were able score a pair of goals in the period amongst the eight penalties between the two teams. The first goal for Michigan came just as one of its penalties expired. Junior defenseman and Dallas Stars draft pick Joseph Cecconi launched a puck towards the net and standout freshman Josh Norris, as John Lethemon was slid from left to right, was able to get his stick on the puck and deflect it into the back of the net giving the Wolverines a one goal lead.

And they weren’t done there.

The Michigan offense began to take over as the period progressed and its defense tightened its chokehold on the Spartans, giving them little to no opportunity to generate and sustain and offensive attack.

“They a did a great job,” Cole said of the stingy Wolverine defense. “Give them credit. We didn’t do a great job breaking in or coming through the neutral zone. They made it hard for us and if you’re not committed to getting pucks in, getting it by them and playing a certain way then we’ll have trouble.”

The Spartans had trouble and then some as the Wolverines were able to double their lead right as the period hit five minutes to play. Much like Keefer earlier in the game, senior forward Tony Calderone found a spot below right in front of Lethemon. The Wolverine offense, comfortable with their defensive abilities, often placed two players in front of Lethemon, all but restricting the sophomore’s view of the game. Calderone happened to be one of those players in this instance when a fortuitous bounce left the puck on his stick all alone in front of the net. The captain, who along with some dekes, was able to outwait Lethemon and backhand the puck up top. As the second stanza came to a close, the Wolverines lead 2-0 with Michigan State back on its heels.

Michigan State, as it has all season, showed resilience to open up the final period of play as its offense began to find some chances. With 11:30 left in the game, Patrick Khodorenko was stopped point blank by Lavigne to preserve the 2-0 lead for Michigan.

Khodorenko’s inability to convert would prove costly just a few moments later as Cooper Marody and Calerdone, who already had a goal on the night, got in on a 2-on-1 against MSU’s Butrus Ghafari. Marody successfully connected with Calderone and the senior tallied his second of the night all but finishing off the Spartans, who trailed 3-0.

All night the Spartan defense made a bad habit of leaving Calderone alone in front of the net and leaving their goaltender out to dry and Calderone’s third goal of the night was no different. Taking advantage of bad positioning from the Michigan State defense, Calderone once again snuck in front and connected for the hat trick that extended the three goal lead to four.

“He got a few good passes and made come plays,” senior defenseman Carson Gatt said . “He’s a good player and anytime you get three goals in a game that means you’re doing something right but it’s our job tomorrow to shut him down.”

Infamous chants of “little brother” rang out from the Children of Yost as the Spartans left the ice. Not that either team in this rivalry needs anymore motivation, but Gatt said the chants add a bit more.

“You got to take that personal, this series is personal and I think everyone kind of realized that,” Gatt said. “But that’s just fuel to the fire already. There’s not much said now that is extra motivation, the motivation is already there.”

The two teams will complete the first home-and-home series of the season Friday night from Munn Ice Arena. Puck drop is set for 7:00 p.m.