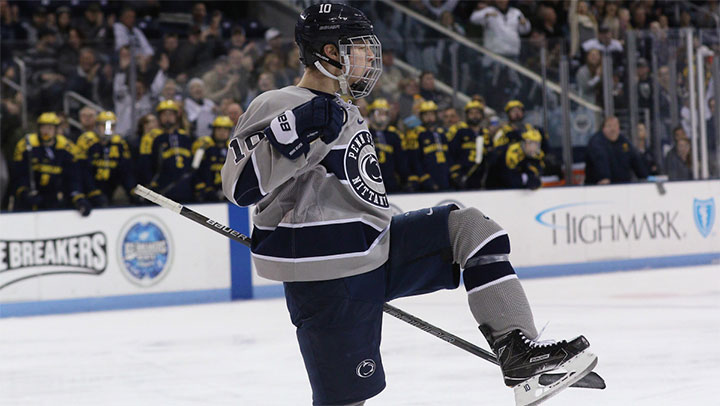 After a thrilling weekend sweep of Ferris State, the Spartans travel to State College to battle the Penn State Nittany Lions. This is your weekend hockey preview.

The Rundown
Both Michigan State and Penn State come into this weekend riding winning streaks. The Spartans having dispatched Ferris State last weekend, enter the contest 7-5-0 and are one of the early surprises in the Big Ten as new coach Danton Cole has the Spartans playing competitive hockey. As Cole alluded to in his weekly press conference, if things go well in conference play for MSU, they are in a position to make things really interesting as far as post-season aspirations are concerned.

Penn State is coming off a much needed sweep of lowly Arizona State. If MSU’s season so far can be characterised as surprising, then Penn State’s has been sub-par. A pre-season top 10 selection, the Nittany Lions have fallen out of the rankings with home losses to the likes of American International College, Mercyhurst and Michigan. A sweep at the hands of Notre Dame certainly hasn’t helped matters for Guy Gadowsky’s squad, who are struggling to get the offense and the defense to work in tandem. Penn State enter this series with the worst record in the Big Ten at 7-7-0.

Players to watch
For Michigan State, the two players to watch are freshman forward Mitch Lewandowski and sophomore goaltender John Lethemon. Lewandowski leads all freshmen in goals and points after a four point weekend against Ferris State. He has been a scoring machine along with his linemates of Taro Hirose and Patrick Khodorenko. The KHL Line will have to have success against the inconsistent goaltending of Penn State if MSU hopes to have a chance of netting points this weekend.

On the back end, John Lethemon has started to come into his own as the de facto starter. He has two shutouts so far this season and has faced some tough challenges. But Penn State is a different animal as they like to throw anything and everything on net and pounce on the rebound. If Lethemon can weather the storm, the Spartans should be in good shape.

For Penn State, junior Andrew Sturtz is the Nittany Lions’ leading scorer and the only top-20 point producer they have. Sturtz may be off the a slow start to his season but he is still a point-per-game contributor so limiting his impact will be key for the Spartan defense.

Prediction
Though both teams are coming into this weekend with confidence, I would have to say Michigan State feels a little bit better than Penn State does. While the Spartans recently achieved their first road win last weekend, Pegula is a traditionally tough barn to play in. Like I said on this week’s podcast, I expect Penn State to come out flying on home ice and find enough offense to win on Friday, but I would also expect the Spartans to rebound nicely on Saturday earning a split on the road and will take an 8-6-0 record going into December.