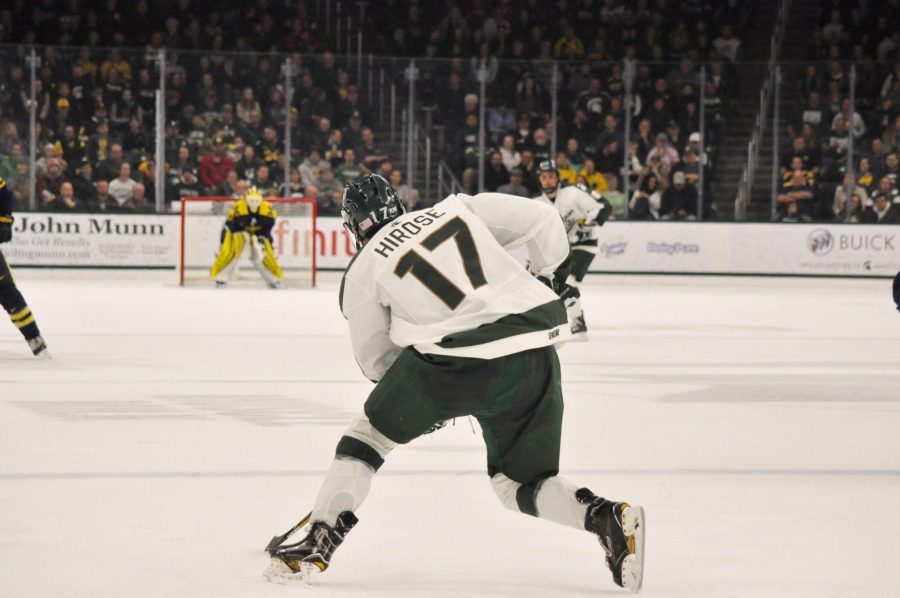 EAST LANSING, Mich. — On a night where the 2007 Michigan State hockey team that won the national championship was honored, the current Spartan hockey team showed they posses a lot of the same traits that their colleagues showed a decade ago. Grit, resilience, and a little bit of luck all took place in Munn Ice Arena as the Spartans walked away with a 3-2 overtime victory over Ferris State on Friday night.

“Obviously an interesting game, and some serious ups and downs in there,” coach Danton Cole said postgame. “I thought we did a good job probably the first 35 minutes and then the tide really turned. Give Ferris a lot of credit. Lots of lessons for the young guys on how you need to keep playing and do things the right way. If you cheat the game, it bites you.”

Michigan State and Ferris State went to the locker room after 20 minutes of play without any goals scored between the two of them, but that’s not for a lack of trying.

Early in the game, Ferris State had a chance to break open the scoring when junior forward Corey Mackin received a one-time pass in the slot all alone. Spartan sophomore goaltender John Lethemon disregarded Mackin’s shot with ease as he stuck out his right pad and sent the puck into the corner. Crisis averted.

Lethemon would spend most of the first period watching play at the other end of the ice as his Spartans outshot Ferris 13-4.

To go with their 13 shots, the Spartans also created a few chances of their own. Taro Hirose, in particular, was able to use his shiftiness to essentially dance around the entire Ferris State team on the ice and fire a wrister at Bulldog goaltender Darren Smith, who like Lethemon, stood tall and snagged the shot with his glove.

The second period had almost everything one could ask for in a hockey game. Hits, goals, great saves and Mitchell Lewandowski. The leading freshman scorer in the nation added two more two his total of eight this season.

Not even four minutes into the second period, Lewandsowski positioned himself perfectly in the slot, took a pass from Carson Gatt and sent the puck into a wide open top corner to break open the scoring for MSU, and he wasn’t done there.

While Lewandowski’s second goal was impressive, it wouldn’t have happened if it wasn’t for the play of Hirose.

Hirose jumped an attempted pass out of the zone by a Ferris State defender and made a cross-ice pass to Lewandowski who scored with an easy finish to double the Spartans’ lead.

“We were coming out of the zone and Taro [Hirose] made a really nice play to deflect it. So when I got it I knew I had to take my time. I didn’t try to one-time it or anything I just tried to get it upstairs,” Lewandowski said of his team-leading eighth goal.

However, Ferris State was not going to go away that easy. With just 26 seconds to play in the second period, Ferris State’s leading scorer, Mitch Maloney, used his speed to get around Tommy Miller and took advantage of Lethemon, who had dropped down a little too early, and put a dent in the MSU lead.

One of the immediate changes coach Cole was able to make when he came to East Lansing was the Spartans’ ability to play a full 60-minute game and weather any storm the opposition threw at them. Tonight was yet another prime example of that.

After being put on the back burner for the first two periods, Ferris State finally woke up in the third period and took it to the Spartans, outshooting them 14-6 in the final 20 minutes of play.

During one of the many raids on the Spartan net, junior defenseman Ryker Killins threw a prayer at the Spartan net that found its way past Lethemon to tie the game at two with 4:24 left.

Just about two minutes later, the Bulldogs had a chance to take the lead after being down 2-0 when Zach Osburn took a penalty for hooking. On the ensuing power play, Ferris State had its chances, but Lethemon acted as a brick wall and sent the game into overtime.

“You’re confident when they’re out there because you know the puck is going to be in the other zone,” Lethemon said of the “KHL Line” postgame. “You know they can make something happen and they did.”

Heading into the extra session, the Spartan bench, and perhaps everyone in the building, knew the Spartans were in good hands when Patrick Khodorenko, Lewandkowski and Hirose stepped over the boards and onto the ice.

With just over a minute left in overtime, Khodorenko connected with Hirose on a pass from behind the net. The Calgary, Alberta native wasted no time with the puck on his stick and sent it over the shoulder of Smith, giving the Spartans the 3-2 win, their second victory in as many games on home ice.

The Spartans will travel to Big Rapids on Saturday night  with a chance to sweep the Bulldogs. They’ll have to do it on the road however, a place where they have yet to win this season.

“You got to get over that hump,” Cole said of his teams’ winless record on the road. “It’s a different situation to figure out how to win a game on the road and we’re going to have to be better. But we’ve been pretty good on the second nights so hopefully that will continue.”