Spartans fall on home ice to No. 7 Badgers 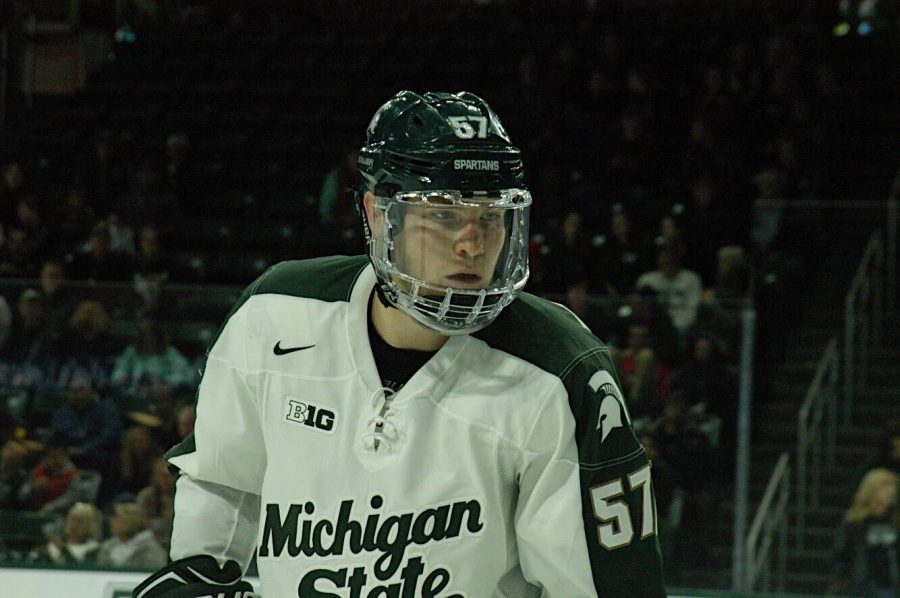 EAST LANSING, Mich. — Multiple times this season Spartan coach Danton Cole told the media that there would be tough times in store for MSU hockey.

The Spartans appear to be in the the midst of those times after falling to the No.7 Wisconsin Badgers 6-3 on Friday night at Munn Ice Arena.

The key point that Cole made then, and now, was that his team take things away from each game learn something and move on.

“There’s enough things to look at,” Cole said. “We’ve got to be better but I think there’s some things that we saw where we can do it and we’ll apply it.”

The Spartans had yet another slow start to the game giving up three goals to Wisconsin in the first period. The first one coming less than two minutes in and the latter two coming just under three minutes apart. Senior netminder Ed Minney, was pulled for the second time this season before the period was over in favor of sophomore John Lethemon.

Minney has made only two starts all season and in both instances was pulled in the first period. When asked what Minney had to do better when starting, Cole’s answer was simple, “stop pucks”.

In the second period, the Spartans, down 3-0, came out strong and took the game to Wisconsin. Junior Cody Milan was able to put MSU on the board with a power play tally just over a minute into the period to make it 3-1.

MSU then made it 3-2 about five minutes later on a rush moving up the right side wall. Freshmen Mitch Lewandowski carried the puck over the line before dishing a pass to senior defenseman Carson Gatt and cutting into the slot. Lewandowski brushed off a check and regained his balance just in time to catch a quick pass back from Gatt. In an instant, the puck was off Lewandowski’s stick and into the top right corner of the goal.

So sudden was the surge that Wisconsin was forced to call timeout.

“We weren’t too down or anything. We were like ‘we’ve got 40 more minutes to play. They put up three goals in 20 minutes we can do the same to back to them’ and I thought we came out with great energy and great resolve,” Gatt said.

Before the second period ended however, Wisconsin was able to get one goal back as a shot from the point hit the post but landed right on the blade of Badger forward Tarek Baker who deposited it into a wide open net to make it 4-2.

The Badgers then snuffed out any possibility of a comeback when they capitalised on a Spartan turnover and made it 5-2 43 seconds into the third period courtesy of senior captain Cameron Hugues.

“The early one in the third, that kind hurts,” Cole said. “I do give the guys a little bit a credit they kinda kept battling through there.”

Wisconsin would net one more power play goal to make it 6-2 before Mitch Lewandowski would have the last word for Michigan State on the power play. After a quick draw, Lewandowski took a hard shot that found its way into the back of the cage for his second goal and third point of the game.

The Spartans now fall to 4-5-0 on the year and winless in the Big Ten. Friday night’s game also marked the team’s first loss on home ice this season.

Perhaps the biggest takeaway for Michigan State was the fact that it had Wisconsin on its toes for most of the second period, a result of them playing within their system and maximising efforts throughout the lineup.

“It’s gotta be units of five out there it can’t be two, three or even four guys it’s gotta be all five,” Cole said. “Especially us, and we know that we’ve gotta be darn near, I don’t want to say perfect, but we’ve got to be really good in order to win hockey games and get some breaks.”

For the rest of the Spartans though, the key to a quick turnaround is to learn what you can and forget all the rest.

“I think we’ve just got to learn from it quick and put it behind you quick,” Spartan forward Sam Saliba said. “You’ve got to learn and forget about it because you’ve got game two tomorrow and it’s crucial for us to find a way to get a split.”

Michigan State continues their series with Wisconsin on Saturday at Munn Arena. Faceoff is set for 7:05 p.m.