We Watch It for the Music | Stuck in Love 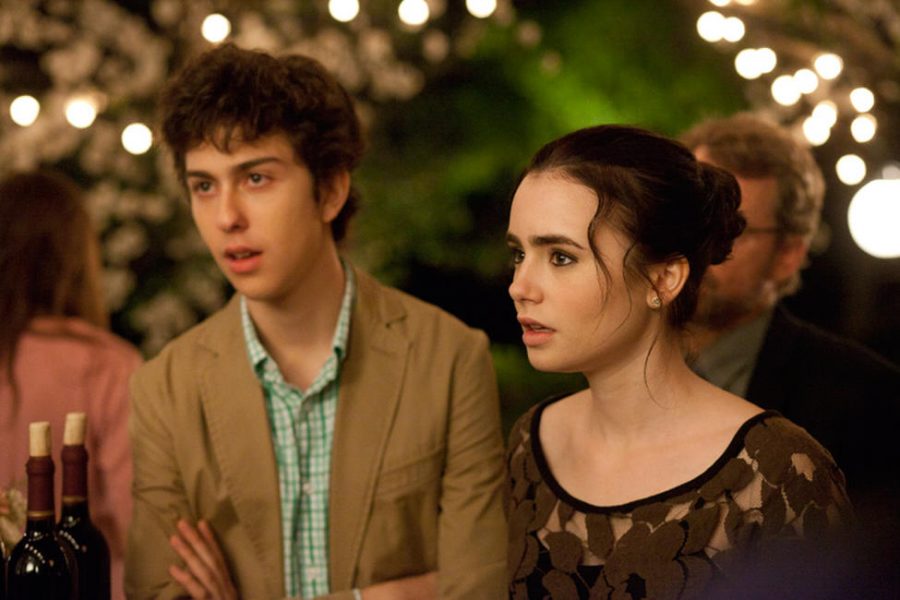 When it comes to navigating the world, managing old and new relationships, and just generally having it all together, adults think they have the leg up on the younger generations, but they don’t have as much room to talk as they think. “Stuck in Love” shows that everyone deals with their own problems, and that no one has it completely together all the time. Love is a confusing, topsy turvey road no matter what age or stage in life. Whether it’s navigating your first relationship, dating casually, or coping with divorce, there will be struggles, though we will make it through all of them.
Home – Edward Sharpe & the Magnetic Zeros
The jubilant whistles of “Home” both open and close the movie with similar scenes separated by the span of a year. The song plays first during the preparation of a thanksgiving feast by Rusty and his father Bill. The introduction may seem simple and uneventful at first, but when contrasted with the thanksgiving a year later, when the song plays again, pretty much every character has developed and changed. After a tumultuous year of attempting to gain some life experience as instructed by his father, Rusty is a little gutsier this time around. We see him cutting veggies with a ‘big boy’ knife and even sneak in a few sips of wine. At the first meal, we see Sam, Rusty’s sister, feels resentful toward her mother for leaving her father to be with a younger man, but by the second time around she seems is forgiving of her as she sets her a place at the table when she arrives unexpectedly. It’s here where we see Sam realizes the importance of opening up to love and the value of relationships. Home is not about a physical place, but found within the relationships you have and the people you love.

American Man – Rio Bravo
Though only a short snippet of the song is featured, the unique ambiance of a live show is portrayed well in this scene. Sam, who is prominently featured, finds herself within spitting distance of the band’s lead singer. Something about the booming bass underfoot, shredding guitar, and the dreamy eyed lead singer, accompanied by the energetic crowd, had Sam under a spell, a spell called lust. A little later we see Sam attempt to capitalize on her starry eyed connection with Pete, the lead singer, but she is abruptly interrupted by Lou, the hopeless romantic who eventually opens her up to the real powers of love.
Beach Baby – Bon Iver
At this point in the movie Rusty and Kate are going steady. After just a short while of being with her, Rusty finds himself in a closet with his dream girl about to lose his virginity to the sweet, melodious voice of Bon Iver playing softly in the background. Talk about getting more “experience.”

I Won’t Love You Any Less – Nat and Alex Wolff
Nat Wolff, most famous for his role in Nickelodeon’s “The Naked Brothers Band,” sings this romantic tune in the background of a gleeful gift giving season, which also gives us a glimpse into what the future holds for Rusty and Kate. The song plays softly, to the point where you can’t don’t completely understand the lyrics. At this moment though, Rusty feels utterly happy – even though has no idea what’s is in store. She was his first, and he will always have feelings for her, no matter what.
Between the Bars – Elliot Smith
Elliot Smith surely knows how to evoke sentiment in a song. It’s likely that if tears will be shed at all during the film, it will be during this scene. After spending the evening together, Sam and Lou end up in Lou’s car discussing their favorite songs. Sam doesn’t recognize Lou’s so he plays it for her. The simple guitar allows the emotion of the song to speak. It shines a light on how truly damaged she is due to her past experiences with love and relationships, and what she witnessed with her parents. Lou sees right through her detached, cynical facade and still wants to truly cares for her. She is completely overcome with emotion, realizing she’s falling for Lou despite the possible heartbreak that may entail. Sam is finally open,  it terrifies her.

The Calendar Hung Itself – Bright Eyes
At this point Rusty has been through a lot, so it’s no surprise that the scene this song plays over epitomizes teen angst in all its glory.  At the beginning of the film, Rusty was the stereotypical burnout who scores the girl of his dreams and manages to lose her. After Kate begins using again, Rusty and his family are forced to  come to her rescue before she eventually goes away to rehab. Relflecting upon his lost love we find Rusty moping in his closet, where he and Kate first made love, jamming out to this indie rock ballad. His first girlfriend provided quite the whirlwind of emotions.

Check out and listen to the movie’s full soundtrack below.